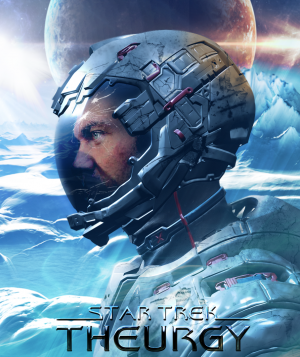 Thomas Ravon was a fighter pilot on the USS Theurgy in 2381. He was MIA after the last battle against the Calamity, but then he reappeared during the Battle of Starbase 84 - having spent over a week on an icy planetoid and repaired his Valkyrie. He immediately took up arms against the Theurgy`s attackers. Ravon aided in the opposition against the parasites that compromised Starfleet Command in the end of the 24th century.

Thomas was born aboard an unknown Federation ship that was conducting a black-op mission. His parents were both Starfleet officers but both perished when the mission turned south. As a baby, he was ejected out of the ship with an escape pod together with the medical officer of the ship. The pod drifted through space for a couple of weeks before it got picked up by the USS Rutledge.

After their journey through space, the child called Thomas was dropped off at Starbase 173. At the age of five, he would get education there and he was to enlist when he came of age. The medical officer was to be his parent/guardian for that time. All that time however, the truth about his parents was concealed to the boy.

At the age of fourteen, the boy started to rebel against Federation guidelines, becoming more or less an unguided projectile. He started to disobey orders from teachers or figures with authority. Eventually he ended up more than once in the brig, but recruitment officers of the Federation saw potential in the kid. A new pre-Academy education program had just been started up on Starbase 173 and they needed a challenge.

At the age of fifteen, Thomas lost his guardian in a tragic accident. On her final moments the medical officer confessed the entire truth about his parents and his origins to Thomas. He took it all in and at some point during the telling, something inside him changed. He became more secluded, and he had an anger that he never showed to others. Due to the death of his guardian, Federation guardians took the boy in ensured that he could begin Starfleet Academy training at the age of seventeen. At twenty, the boy was one of the youngest Ensigns to graduate from Starfleet. Specialized in piloting as a CONN Officer, he proved to be among the top of his class.

Ravon's first comissioning was aboard the USS Thunderchild in 2371, in the middle of the Dominion War. Furthermore, the ship had just been through its encounter with the Borg in the Battle of Sector 001, so the mark of war lay heavy on the minds of his new crew. During his time on the Thunderchild, Ravon got trained by pilots who knew what it was to fight against superior enemies. It was a lesson for him to learn that Federation fighters weren't invincible, unlike what the tutors at the Academy had said when they spoke of the current and future warp fighters in the fleet.

During his time on the Thunderchild, Thomas saw these new fighters as soon as they rolled out of the shipyards. Starting off with his Peregrine-class fighter, he soon flew the newly developed Mk I Valkyrie, and the year after, it was replaced by the Mk II iteration of the Valkyrie. Thomas learned to fly to his limits yet kept in mind that some fights could never be won, regardless how advanced the fighters became. Still being a bit secluded from his peers in the squadron, Thomas applied himself fully to help the deck hands and the Chief of the Deck on the Thunderchild with fighter maintenance and upkeep. Having grown quite familair with all three different fighters he had flown during his time on the ship, and not having any aversion to getting his hands dirty, he was likely the most proficient fighter pilot on the Thunderchild when it came to repairing them.

During the time on Thunderchild, fighting in the battles it saw, Ravon was commended for his service aboard the starship. Even medals came in the picture, yet Ravon respectfully declined them as he believed that the decorations and medals were a sour reminder of the losses the squadron had suffered. Regardless, Thomas got promoted to Lieutenant after his time aboard the Thunderchild

His second stationing was aboard the USS Kusanagi. On arrival there, it only took him a few months to rank up from Element leader to Flight leader. In this new role, Ravon got used to taking command. With the Red Vipers squadron, Ravon accomplished a great many operations, yet also shared his part of losses and accidents. While no longer as seclusive as he used to be, he learned to cope by spending his time with the deck hands whenever he could, seeing fighter maintenance as a kind of therapy when needed. Furthermore, Thomas flew together with Miles Renard on the Kusanagi. Indirectly, however, since the two pilots served under the same Wing Commander yet in different squadrons. Miles Renard vanished from the Kusanagi the same year Ravon arrived, however, the Vulpinian transferred off to another ship in the fleet.

Thomas' actions in the Red Vipers Squadron' did not go unnoticed. His own SCO aboard the Kusanagi selected him for the Valkyrie Project aboard the USS Theurgy. The fact that Ravon was appointed as Assistant SCO during his last year on Kusanagi also aided in that decision. As it happened, Miles Renard had been transferred to the USS Theurgy back in 2378, and the two fighter pilots reunited under the command of Taylor Lucas, the SCO of the Lone Wolves Squadron. Little did Thomas know that, months later, Miles Renard would become his fourth SCO.

The transfer to the Theurgy was approved and executed while the Theurgy-class ship was stationed on Earth. However, Thomas didn't get much time to find out what was going on since the crew and ship left in quite a hurry after unmasking the true identity of Starfleet Command.

The escape from Earth and following chases with Task Force Archeron had a rather sour taste for Ravon as his former ship and the crew of the Kusanagi were added to the task force and ordered to hunt him down. It had a rather big impact on Ravon as he was now forced to fight against former squadmates and friends. As he was forced to disable or even kill people that he knew closely and trained himself, It would undoubtedly leave a permanent mark. This caused Ravon to be a bit more secluded person once more, coming to Sten Covington with requests to help in repairs and maintenance, before he slowly loosened up amongst his fellow wolves.

During the Niga Incident, Thomas got infected by his fellow crew members. He didn't remember what had transpired during this period when he was infected, however, due to the antidote. Sometimes he woke up at night, having relived some moments of what he had done during infection, but most of it escaped his mind. Long afterwards, he was still in doubt whether or not these flashbacks were real or just regular lucid dreams. 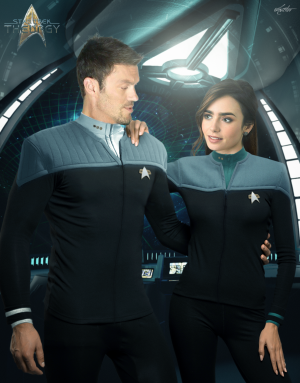 Image: Lieutenant Commander Thomas Ravon and Lieutenant Zephyr Praise became a couple in April of 2381, serving together on the USS Theurgy.
Yet it seemed that Niga was only the tip of the iceberg. Following next was the Ishtar Incident. Being used as a pawn by some sort of deity, Thomas was placed in an intimate situation with his captain. A rather awkward situation that eventually, after escaping the situation they had been placed in, worked itself out with a group effort of all crew members of the Theurgy.

The USS Harbinger´s arrival followed, and during the first battle with the Calamity Ravon fought alongside his wolves, making a daring attack on the starship from the future alongside Evelyn Rawley. While Rawley had to beam out and had her Valkyrie destroyed, Rawon managed to get back in one piece. After the battle, the week of repair and maintenance on Theta Eridani IV was like a perfect holiday for the crew and Ravon. The bond between Thomas and Skye Carver become stronger there and their feelings towards each other became more solid. Alas, faith decided against the Theurgy and it's allies with the re-appearance of the Calamity.

It was just before the last battle with the Calamity that Ravon was caught in a desperate fight for his life. The odds was always stacked against them, and Thomas had chosen to save Evelyn Rawley from the Calamity´s Reaver fighters during their escape back to the Theurgy from an Icy planetoid. The two pilots had shared an incident during Lohlunat, an action that never truly got seen through or solved before the Calamity struck once more.

Perhaps it was a sense of guilt or just camaraderie that caused for Ravon to help Rawley. Regardless it resulted in fighter failure for Ravon. Nothing more was heard of him. He was officially MIA from there on out.

Until the Battle of Starbase 84... when he returned in the Hybrid. 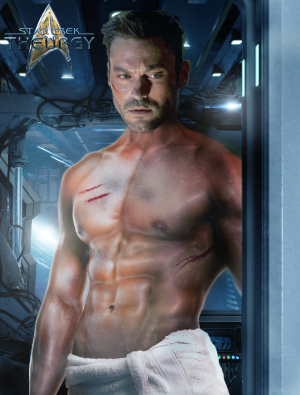 Thomas was a bit of a hothead, when things were not going his way, he would either let it be known to his fellow crew members or disobey the order. He wouldn't, however, take unnecessary risks that could bring the life of his fellow crew in danger and he would listen to well thought-out tactics if they proved to make more sense than his own ideas.

Off duty, Thomas could be a bit secluded to himself, rather spending his free time aiding Sten Covington and the deck hands in the Fighter Assault Bay than with his fellow Line Officers, but not to the degree that it would impede his ability to fly with them or earn their distrust. Some would say he was just a bit shy, but after a while, he would loosen up around some close members of the Theurgy´s crew.

Thomas Ravon was a tall and lean man with green eyes and dark brown hair. Like the rest of the Lone Wolves, he maintained a rigorous training regime. He had no tattoos and he had not chosen to keep any scars gained from the battles he'd seen.