Before his death, Sten Michael Covington was Chief of the Deck in the Fighter Assault Bay on the USS Theurgy. Covington aided in the opposition against the parasites that compromised Starfleet Command in the end of the 24th century. He was killed during the Battle of the Apertures.

Sten Michael Covington was born in 2323 to Stephen and Astrid Covington as the third of six children. From a young age, he developed a great love for all things flying. From birds and bugs to starships, flight always fascinated him and before long, he would beg to be able to spend days against his parents' workplace, as civilian members of Starfleet's shuttle design teams.

As such, it seemed a natural thing for Sten to aspire to a career as an Engineering Officer. However, it quickly became increasingly apparent during his teenage years that it would not happen. Indeed, he began to struggle in the advanced and extended classes he was taking as an attempt to make himself a more attractive prospective Cadet once he would apply to Starfleet Academy.

However, in those courses that were hands-on or those theoretical ones that had a practical application he could easily relate to, he excelled.

It was as a shuttlebay technician that Sten Covington began his career, somewhat grudgingly and acknowledging his stint as an enlisted man was but a stepping-stone. However, he quickly fell in love with the manual nature of his work and eventually, he began to request more and more advanced courses.

Over the next several years, eventually reaching the rank of Master Chief Petty Officer, Covington's expertise and reputation grew as he sought out opportunities to expand his professional horizons. In 2361, in light of his extensive qualifications, he was promoted to Warrant Officer and assigned to the team developing the prep, launch and retrieval of the prototype Peregrine-class fighter as an enlisted subject matter expert.

And this was when he finally found his true love within Starfleet. Since his days first working with the Peregrine program, Sten further expanded his training in auxiliary craft maintenance and operations to the point he became involved with the design process for the Hammerhead and the Valkyrie fighters as the "ground crew and maintenance advisor". Also, he became instrumental to the creation of a training curriculum and the devising of new procedures for the operation of fighter-centric launch bays.

And so went the next two decades, bouncing between a design facility, Starfleet Academy and star bases or starships intended to be test beds for new designs, modifications or procedures as well as bringing their crews up to speed with the new fighters they were receiving. It was during that period that he had his one and only marriage. It lasted for but four years and yielded two children, Margaret and Erik. Indeed, Jacqueline, his wife, could never adapt to his long hours and frequent absences which could go from but a few weeks to several months in length. And he only knew she had left him when he returned home after a four-month absence and a promotion to Chief Warrant Officer First Class in 2372 and found his house empty save for a few of his personal possession and a copy of the divorce signed by a judge the day after he had last shipped out.

This hit to his personal life, however, only forced him deeper into his work and he spent the duration of the Dominion War doing what he did best: working with training and preparing support crews for fighters and shuttle bays. That is until he was called to provide his considerable expertise to the Valkyrie Mk III project. And, as the first squadron was to be deployed for its service testing phase, Chief Warrant Officer Sten Covington was assigned to the testbed platform, the USS Theurgy in a position he had a hand in creating, that of Chief of Flight Deck Operations, or as it was more commonly known, Chief of the Deck.

Once the Theurgy and her crew were branded outlaws, Sten needed very little convincing of the justness of their cause. Why, he himself couldn't put a finger on it. After all, he was just the Chief of the Deck and he left the officers in red to their games and plots. But in this case his finely honed skills at detecting bullshit, a talent generally shared by senior enlisted men, immediately led him to believe Captain Jien Ives, and really his commanding officer had never given him any reason to doubt.

The adventures that followed had taken their toll on Sten. When the ship was infected, he managed to avoid the initial exposure and had taken a stand between several affected crewmen and some of his people, using a heavy wrench in one hand and a ball-peen hammer in the other to fend them off long enough to lock himself and his uninfected staff in the tool crib, and not coming out until well after announcements of the all-clear were given.

He hadn't had much of a chance to adjust following that crisis before the encounter with the Ishtar entity, and this one he did not escape. He found himself naked and locked in a small compartment and cuffed to one of his more attractive female technicians and, despite every attempt both had made to remain professional, there had been no avoiding the intimacy that had ensued. The resulting discomfort between tech and Chief was only resolved once they had made contact with the USS Harbinger and both ships' Chiefs of the Deck arranged for a one-for-one personnel swap when both crews were intermingled.

At least, the encounter with the USS Calamity was not overly onerous for Covington and his personnel. Granted, a few suffered minor injuries in the initial attack but there were no serious casualties. In fact, they were downright lucky. Indeed, when Theta Eridani violently lost its status as a safe haven, all of Sten's staff was on board the Theurgy, working on fighter maintenance and an extensive overhaul of the fighter bay, this opportunity granted by the limited flight operations being conducted while the Theurgy was undergoing repairs. When the Calamity returned, Covington found himself extremely busy, between getting combat-ready fighters and pilots out the bay and receiving shuttles loaded with crewmembers escaping the volcanic hell their hiding spot had become. But as the Archeron arrived, he still had no idea the mess that was left for him to sort out in the main shuttlebay...

He was later killedin action during the Battle of the Apertures. 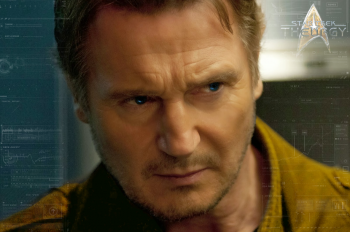 A consummate professional would be the most apt description for Sten Covington. He takes his work extremely seriously and makes a point to demand excellence from himself and his staff. As the head of a sub-department, he is known as being a tough but fair supervisor, one who will go to great lengths to ensure the work at hand is done yet without burning our his people.

However, it is not to say he is a tyrant. Of course, he expects the best from everyone he works with but he fosters a more relaxed work environment, usually playing some 20th century Earth rock on the bay's speakers and he has been known to give his people nicknames as a way to promote camaraderie and teamwork.

He also has a pet peeve with regards to the treatment of enlisted personnel in Starfleet. While he acknowledges the division between the men and the officers, on every assignment he has been on since first promoted to Chief Petty Officer in the early 2350's, he has pushed hard to ensure no commissioned officer would step on his subordinates based on their status as officers. Indeed, he has never been one to stand for seeing a group of officers ordering enlisted men out of a holodeck, sports court or a table in the mess hall or lounge simply because they wanted to make use of these facilities and decided pulling rank was an appropriate matter to get what they wanted.

Between his booming and gravelly voice, his powerful stature, his attitude and his sheer presence, the dressing-downs of junior officers making unreasonable demands became fairly well-known and while it led to some tensions with the types or officers to engage in this behaviour, it also led to his reputation as being one tough bastard who looked extremely well after his subordinates. And being in the fighter community, it also earned him his callsign despite the fact be was merely a deck ape: Papa Bear.

He keeps himself easily approachable by men and officers at all times when his advice, input or representation are required. One of his views is that a Chief's work is never done and while he will not necessarily cut short his rest time for all issues, he definitely will do so for extremely pressing problems with his people or the auxiliary craft he is responsible for.

Sten is powerfully built. Despite getting older, the benefits of a regular exercise regimen, a healthy diet and modern medicine keep him in top physical condition. His hands and forearms bear myriad small scars from arcing conduits, tool slips, minor burns and the nicks that come with the territory of maintaining spacecraft. Also, the thick hair on his arms, hands and chest are rumoured to be a contributor to his callsign of Papa Bear.