Before his death, Nolak Kalmil was a propulsion chief who was briefly posted as Acting Chief Engineering aboard the USS Theurgy after the untimely death of his department head, Lieutenant Commander Solkar. Kalmil was put in stasis after sustaining fatal injury during the Niga Crisis when the Theurgy visited the Mahéwa System. After the Theurgy raided the Black Opal supply depot, the carrier’s sickbay was provided necessary neck-prosthetic to restore Nolak to full health. While Nolak had been in stasis, he had been replaced by Nicole Howard, Alexander Rosek, Tatiana Marlowe and William Robert "Billy Bob" O'Connell in that order. After the Battle of Starbase 84, whilst conducting repairs in the Azure Nebula, Mister Kalmil was K.I.A. by the Devoted of Morali, when they tried to seize command of the ship for their prophet.

Born on the peaceful world of Delta IV, a planet known for beautiful islands, pleasant unified planet and a culture that has transcended open-mindedness especially a very open sexual culture. The Delta people are known to have be telepathic and empathic allowing them to since and feel the emotions of others around them. They are mostly commonly found working in the medical field in Starfleet because of their special abilities to absorb and minimizing the feeling of pain through “mind-meld anaesthesia” technique. Both sexes emit some of the most potent pheromones known to Federation science and because of their highly sexual culture upon entering Starfleet Deltan’s take an ‘oath of celibacy’ to avoid complications with the other members of the ship and their own personal well being.

Nolak Kalmil, grew up wanting to join Starfleet from a very early age, he enrolled in many of the planet side programs offered by the Federation. He discovered very early he had a knack with running and repairing machines and by the age of 12 was already head of one of the major power production plants located on Delta IV.

Enlisting in 2348, he entered the engineering field instead of medical where most Deltans are found. His academic scores excelled beyond measure in quantum physics, and warp core engineering, graduating at the top of his class in 2354. His first post was on-board the Miranda class light cruiser USS Eisenhower. The ship was used mostly as a training vessel and performed numerous scientific explorations. During one mission while docked space station along the Romulan Neutral Zone Kalmil singlehandedly prevented both a political and economic catastrophe from happening when he discovered and prevented a couple Romulan spies from sabotaging the space station powercore during one of the peace talks between the two nations. 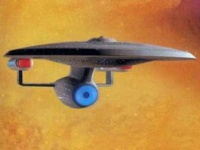 Image: The USS Excalibur
His actions promoted him to Petty Officer Third Class and he received a Starfleet Medal of Merit. He soon transferred over to a much larger vessel, Ambassador class USS Excalibur in 2362 under the command of Captain Al Smutko. Showing outstanding performance, courage, and dedication, he was promoted Chief Petty Officer Second Class around 2365. Captain Smutko retired to his homeworld of Daa’V in 2367, and for the next year the ship went through a period of rotating captains, included Commander William T. Riker during the Klingon Civil War of 2367-2368. When Starfleet decided to blockade the Romulan-Klingon border, Nolak met William Robert "Billy Bob" O'Connell, who he would serve with later aboard the Theurgy.

In 2369 the USS Excalibur encountered the Borg Cube 45208, many of the ship's officers and crew were lost or assimilated. Only the timely but desperate actions of Petty Officer Kalmil and the remaining crew of Excalibur, prevented the ship from being completely assimilated into the collective. His gallant actions came at a very high cost. He lost a good many of his friends that day, those memories still haunt him to this day from time to time. He received a Silver Star and promoted to Chief Petty Officer for the exemplary actions and call above duty.

After the USS Excalibur returned home to be refitted and repaired from the Borg encounter, Nolak Kalmil took a two year leave of absence to recover on his home planet. Using this recovery time he spent endless hours studying every engineering report he could get his hands on no matter how small the information may seem. Even writing new theories on quantum physics dealing with warp core power production, ways to conserve and redistribute power flow, and a fluctuating shield modulation for the shields effectiveness against the future encounters. Most were quickly confiscated and classified by the Federation. 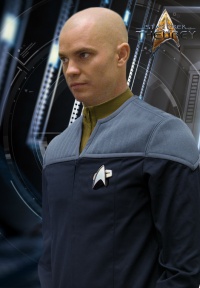 Early in 2372 he rejoined Starfleet and served as an instructor at Starfleet Academy. Stationed in San Francisco just prior to the Battle of Sector 001, 2373. While in the middle of a lecture he heard word that a Borg cube was on a straight course for Earth. He immediately canceled class and volunteered for duty aboard the Saber class USS Yeager, and took temporary command when the handful of officers aboard were injured or killed. The battle against the Borg was first fought under the direction of Admiral Hayes then under the USS Enterprise’s Captain Picard. The USS Yeager and its crew were able to help destroy the Borg cube. The ship received heavy damage but survived the battle. For his actions in face of danger received his second Silver Star and earned a promotion to Senior Chief Petty Officer.

After the battle he returned to his position in the Academy for a couple more years teaching new cadets methods to counter growing threats now seemingly to appear everywhere along the Federation's borders. It was during this time he began to notice a subtle change in the behavior of Starfleet Command, sensing emotional fluxes, and sometime sporadic orders. After a heated debate with a fellow colleague he started to have second thoughts about Starfleet role in the universe and nearly retired his commission completely leave the human planet and back to his home world. This was approximately 2378, however a message from an old friend appeared from Captain Jien Ives requesting for his service on a newly commissioned ship due to leave spacedock soon. The bottom fell out in 2380, when the crew of the USS Theurgy learned the truth about Starfleet Command and went on the run.

During the Niga incident, Nolak Kalmil was infected with the alien pollen that impaired his judgment and compelled him to spread the infection to his shipmates. He was critically injured while attempting to force himself on Jien Ives and suffered a fractured spine and minor burns. He was placed in stasis until medical resources could be found to return him to duty. Such resources weren't available until the supply raid on Black Opal almost two months later. A set of prostethic vertebrae capable of replacing the damaged vertebrae in his neck made it possible for Master Chief Kalmil to return to duty to a ship fighting impossible odds and department head positions filled by both familiar faces and complete strangers.

After the Battle of Starbase 84, whilst conducting repairs in the Azure Nebula, Mister Kalmil was K.I.A. by the Devoted of Morali, when they tried to seize command of the ship for their prophet.

His calm and peaceful nature allowed him to have a successful career within Starfleet. When under fire his orders were calculated, direct, and soothing control of things in Engineering. His racial telepathic ability, aided him farther with others around him by drawing their pain and fears away from them, channeling it to himself adding undue stress to himself. This allows a better chance for crew members not to crack under pressure.

Restrictions Starfleet have about Deltan's serving, causes him to be a bit reclusive in his private time. Surrounded by strangers this feeling of isolation more apparent. Yet he still takes the upmost pride in his work, and puts the safety of the ship his number one priority above all else. When not in engineering, he could be found in the ship's garden area, or his room. Because of his sworn oath of celibacy upon joining Starfleet, he seems shy or aloof, often retreating from interactions with other races and activities that weren’t work related. Once assigned quarters again, it will be bleak and barren mostly due to his private effects have long been discarded in his long absence. 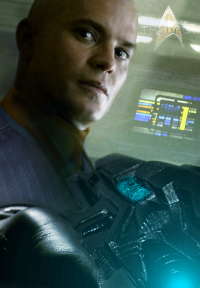 He is slightly thinner than most humans, and his facial features appears quite symmetrical adding to his alien physical appearance than his human cousins. His bald head reflects light giving a healthy shine adding to the pleasant features of his face. His right arm appears to have been burned all the up to his upper right shoulders where his Deltan Union Emblem tattoo is. Leaving a noticeable scar. The left arm has a tattoo of a medieval sword with NCC-26517 along the blade. Although his race is telepathic, his own experiences with mind-melding techniques are less than par to others of his kind. He tries to keep his mind closed from others, as well as rarely using his racial ability on those around him.