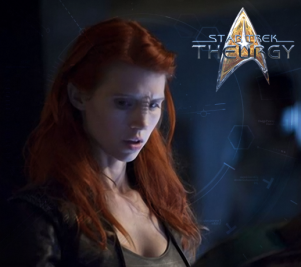 Nicole Howard briefly served as Chief Engineer on the USS Theurgy replacing Nolak Kalmil. Saving the Captain's life, she took a phaser beam to the centre of her chest and was put in stasis before brain death. She was replaced as Chief Engineer by Alexander Rosek, followed by Tatiana Marlowe and William Robert "Billy Bob" O'Connell.

After the raid on the Black Opal supply depot, the ship had the supplies necessary to treat her severe injuries. However, due to medical complications, she was unable to retake her place as Chief Engineer, instead dying in Sickbay shortly after her resuscitation.

Life did not start easily for Nicole Howard. The daughter of a Bajoran refugee and a Starfleet engineer stationed at the illustrious Utopia Planetia Shipyards, she started life under a bad sign. Due to complications she was born almost a full month early and her mother passed away within hours of her birth. For a time her father held up well, but the strain of working at the shipyards and caring for a child who looked so like her mother, the woman he had known for far too short a period and loved intensely, drove him to begin drinking. It was not long before his dedication to the bottle trumped his dedication to both his job and his young girl.

His spiral of self destruction would have dragged her down to if it had not been for the gang that took her in on the surface of the red planet. Though they were little more than criminal thugs and thieves, they still cared for her better than her grievously damaged father could manage. She was taught how to fix things, taking to the simple engineering like a fish takes to water. With no formal schooling the gang became her full life.

It was not until an incident involving a Starfleet officer’s hoverbike that it all fell apart. The bike had shown up at the gang hideout and she was told to stip it of any identification and tracking programming. Little did she know it had been taken for a joyride and already been reported stolen before it ever wound up in the hideout. The local authorities were none to pleased when they raided the hideout and found quite a bit of stolen merchandise and equipment.

With a number of petty charges already on her record she was sent to a penal institution on Earth. It was here she began to try and get her life back on track, taking a number of courses through the education system of the institution. She was only in for about 6 months, but they were a 6 months that reshaped her. She still bucked authority, but she was driven to want more. And with her background there was really only one place to go to that would at the very least give her a chance, Starfleet.

She enrolled in the Academy and set about trying to prove herself. She had a hard time of it all the same. She constantly bucked any and all authority and didn’t do well when her work was questioned. And though she always tested very high on intelligence and technical skill, she remained in the bottom 20% of her class. In the end when she graduated it was a semester behind the rest of her class and it was without any fanfare.

Right out of the academy the only ship that would take her was a small class 9 cargo transport vessel. It was not the sort of posting one could get into a heck of a lot of trouble in, mostly because there was not a heck of a lot to do. Her days consisted of routine maintenance and trying to amuse herself. Being a ship of misfits with little to do there was always a game of poker, an old broken down dom-jot table, an old set of Cardassian pinochle tiles, and a mostly busted tongo wheel. Each of these games had a version in which clothing was used to gamble and by the end usually someone would end up naked. To say there was a lot of sex going on there would be to put it quite mildly.

It came as no small relief when she was at last transferred to a ship with something to do beyond play stupid games and fool around. Somehow she had earned a promotion to Lieutenant Junior Grade aboard a Nova-class vessel, the USS Angelo. It wasn’t a massive step up, but it was indeed a step up all the same. It was a larger crew, but still far smaller than most Starfleet vessels. She made friends fast and some enemies even faster. She once more found herself bucking authority and doing mostly the tasks she set up for herself. She was a skilled engineer, but wound up on report more than once for not following the orders of her asshole supervisor, or at least she regarded the man as an asshole.

As always she was torn between her desire to be all she could be and her disdain for being told what to do. It likely cost her a more rapid promotion track. Instead she wound up on the dinky Nova-class vessel as her peers got promoted and transferred off that tiny little boat.

Finally she was transferred to a ship of the line and made the Assistant Chief Engineer or the USS Theurgy. And while she had hoped that now in a position of some authority and freedom her life would take a massive upswing, that is not what happened at all.

Before she could even really settle in on her new home everything changed and it changed rapidly. Instead she, along with the rest of the crew, ended up on the run from Starfleet, though part of her enjoyed the irony. She’d joined Starfleet to escape from always being considered a criminal and, now, here she was, considered a criminal by all of the Federation. This was not what she wanted at all.

But she did her job. Due to the rapidly changing lives of the crew of the Theurgy she wound up being put in charge of all of engineering. The constant strain of that only mitigated by her good relationship with her captain and her crew.

So much happened. From the Niga Incident and the virus spreading amongst the crew, an incident the striped her of control and made her do things. The incident left her more than a little rattled and shook up her relationships more than a little. She found herself drawing close to Captain Jien Ives perhaps as a result of it all. Such was it that when the A.I. of the ship USS Calamity attacked the bridge she did what she would have once considered the impossible, she leapt in front of the blast meant for her captain. It should have killed her, the blast had practically burned a hole right through her, but somehow she had been lucky. Her spine was nearly irreparably damaged and her heart was practically destroyed, but she had been put in stasis before complete brain death, so that if the damage could be repaired and very quickly after she were removed from stasis she would stand a good chance of pulling through.

After the raid on the supply depot of Black Opal there was finally an artificial heart ready for implantation. The surgery would be a success, though the extent of the damage would still leave her incapacitated and weakened enough that the viral outbreak aboard the ship was able to infect her much easier than had been expected. Though medical staff did there best, she passed away after having a final conversation with the captain about shared memories and feelings.

Nicole Howard was defiant to a fault. She had never been that great at following orders and prefered to do things in her own way and at her own pace. As a result she’d butt heads with almost every person who's ever had a position of authority over her. In some ways, this was because she was talented and she knows it. She knew her skills were needed and that she couldn’t just be caste aside because of her abrasive personality.

Speaking of her abrasive personality she tended to either be a great friend or a nasty enemy, with very little room in between, the kind of person you either loved or hated. But when it came down to it, once she has attached herself to someone, she was loyal beyond what intelligence should suggest.

Tending to always be very intense in her emotions, of which she had little control, she was always at 100%. When she’d be happy, she’d be filled with glee, and when she’d be sad, she’d be in the darkest depths of depression. There was no half way for her, no middle ground where she was just okay.

Being of medium height and on the smaller side the most noticeable thing about Nicole Howard was her bright red hair. Despite being only half Bajoran, she had full nose ridges, though she did not wear a traditional Bajoran Earpiece, as she was not raised in Bajoran culture she had no association with the faith of the people.

Due to extensive damage from the attack from the A.I. of the USS Calamity Nicole had required extensive surgical reconstruction. The attack left her heart in an unusable state, requiring the implantation of an artificial heart. The extent of the neurological damage from a lack of oxygen to the brain while her heart was nonoperative caused a degree of memory loss and a noticeable shift in personality and temperament.

In addition, due to the unique power setting of the phaser that hit her, it pierced through her body, not only damaging her heart, but also doing severe damage to her spine. Though the damaged vertebrae were replaced with artificial ones, the extent of damage to her spinal left her paralyzed below the navel. The complete assessment of her sensitivity was delayed at her request, though early testing performed showed a decrease in nerve sensitivity ranging from 25% in some areas to nearly 90% in other areas.

In addition below the navel she has a near complete lack of motor control and without regular exercise via mechanical aid her muscles will atrophy. Though thanks to her unique half bajoran physiology some internal muscles are still capable of limited function allowing her to maintain bladder and bowel control to a degree, though they will fail given a certain degree of strain.

Though further repairs were possible, the lack of certain specialty equipment or suitable artificial replacement parts made a complete recovery impossible.