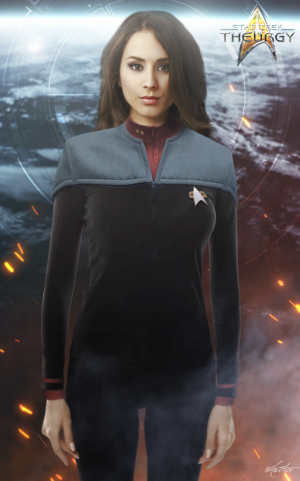 Sabrina Lail was the Chief CONN Officer on the USS Theurgy, previously commissioned as the Chief CONN Officer of the USS Oneida from 2376 to late 2380. Following an altercation with Captain Jesse 'JJ' Jackson, she was demoted from Lieutenant Commander to Lieutenant and relieved of her duties as Chief CONN Officer. As of March 2381, having transferred from the Oneida, Sabrina joined the crew of the Theurgy and aided in their opposition to the Parasite threat that had infiltrated Starfleet Command at the end of the 24th century.

Born in 2346 to Commander Johnathan Lail and his wife, Meaghan, who met at Starfleet Command in San Francisco, Sabrina was the youngest of one sister, Miranda. Shortly after Sabrina was born, the family moved to Greater Boston while Commander Lail took a posting on Starbase One, their mother took a position at a branch of Starfleet Medical in Greater Boston.

Family life was often very difficult for Sabrina with her parents often too busy to be with her and she often didn’t get along with her older sister, Miranda. Having demanding parents and an intellectual sister, Sabrina had a fear of falling into her sister’s shadow and demands nothing less than perfect. Resulting from their infighting and unhealthy competition, the Lail sisters hadn't spoken to each other since Miranda was accepted as a research fellow at the Daystrom Institute in Okinawa during Sabrina’s teenage years.

It was also during this time that Sabrina discovered her love of flying and earned her pilot’s license. Although for a time she was content with small craft such as runabouts, her eyes would always gaze onto Starfleet’s starships that would come and go from Earth. Like her sister, however, Sabrina was accepted as a research fellow at the Daystrom Institute. Nevertheless, her passion for flying would lead her to decline the offer and instead enroll at Starfleet Academy in San Francisco; a shock to her family.

From 2364 to 2368, Lail attended the Academy as a cadet. During her time at the Academy, it became apparent that she was an overachieving young woman with an intellect considered intimidating by her peers yet adored by her elders. However, she still initially struggled and even considered seeing if she could get her fellowship back. It was around this time she met a cadet who would later become one of the first 400 Tactical CONN Officers, Aurora Marano. Assisted by the creative and artistic Marano who was nothing like your average fighter pilot and a complete complement to Sabrina’s personality, Lail was set on track at the Academy to graduate near the top of her class.

Sabrina graduated from the Academy in mid-2368. Having graduated near the top of her class, she was fortunate enough to be posted as a CONN Officer aboard the USS Enterprise-D where she served from graduation to the destruction of the Enterprise in 2371. She was one of many Starfleet officers who played a role in helping to evacuate civilians from the stardrive to the saucer section before the core went critical. Following the destruction of the Enterprise, she would return to Earth.

Life on Earth was an adjustment from the several years Sabrina had spent on the former Galaxy-class starship. Now a Lieutenant, she was posted to Starfleet Command and primarily ferried Admirals and VIPs throughout the Sol System, a task she considered mundane to life at the helm of a starship. Nevertheless, while she was on Earth she rekindled her relationship with her sister who had been keeping tabs on her since she graduated the Academy. However, in 2373 she would be posted to the newly commissioned Sovereign-class USS Enterprise-E and would participate in the Borg Incursion of Sector 001 as well as the Son’a Crisis in the Ba’ku Nebula of 2375.

In 2376, Sabrina was promoted to Lieutenant Commander and appointed the Chief CONN Officer of the Iroquois-class USS Oneida under the command of Captain Jesse 'JJ' Jackson. Between 2376 and 2380, Lail served valiantly under Captain Jackson who admittedly liked how bold his Chief CONN Officer could be, a quality that didn’t always earn Lail friends. However, in November of 2380, Lail’s boldness would go too far with Captain Jackson in an altercation that would result in her demotion to Lieutenant and her being relieved of her duties pending further action.

Following the altercation, Sabrina made arrangements to leave the Oneida through sheer impulsiveness, something which Captain Jackson told her was unnecessary but she was adamant. Lail was reinstated as an Assistant Chief CONN Officer aboard in January 2381. Around this time Admiral Anderson made contact with the Oneida and was able to convince Captain Jackson of the truth behind the USS Theurgy. As a result, Sabrina would be pulled into the Theurgy’s mission.

Although trusting of Captain Jackson who had decided to cut off all communications with Starfleet, she was wary of the Theurgy. After the Oneida and the Theurgy might rendezvous, Lail knew the only way she would get the answers she sought about the renegade starship was aboard the multi-vector dreadnought. She would be among the personnel to transfer from the Oneida even though her reasons to transfer to the Theurgy were all her own.

Lail was bold from the confidence she carried herself with to how outspoken she could be but at times that boldness went too far and Sabrina acted out in impulsive ways - sometimes even snapping at people with whom she was upset. Nonetheless, she was a passionate person but there were times where she could be too fiery and that passion would come off in a negative light. Highly intelligent and calculating at times, Sabrina also held a strong moral compass and a sense of right and wrong.

Sabrina was hyper-aware and hyper-vigilant which had driven her to do questionable things that she has had to justify more than once. Due to her vigilance and awareness, she had trouble trusting others but was not untrusting peers.

Sabrina had a very slim face with high cheekbones, almond-shaped eyes, and thin lips. She had a peach and cream complexion complemented by long chestnut brown hair she usually wore down in waves. Lail had a very slim and athletic figure. Sabrina had a unique look about her which people usually took notice of. Unfortunately for Lail, oftentimes that uniqueness would give away exactly what she was feeling as well.

She had no discernible scarring or tattoos to speak of.