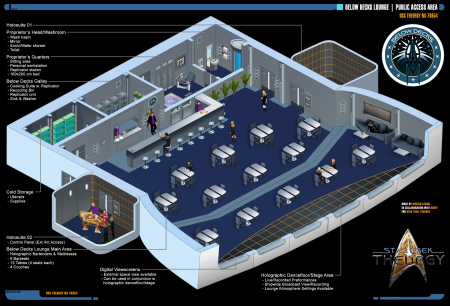 Below Decks was a recreational lounge area occupying much of the aft center of Deck 28 on the USS Theurgy. Below Decks was open to all crew members and was thus more frequented than the other lounges on the Theurgy. The were other lounges , most run by holographic staff, but some had civilians too. Given the size of the USS Theurgy and its significant crew complement, the ship also had three large mess halls.

Although not as sophisticated as an actual holodeck, the lounge possessed a holo-stage that also served as a dancefloor. There was also two holosuites, one on either side of the lounge. As the lounge was positioned in the lower aft of the tertiary hull, the view screens were configured to generally display a forward facing view, although the viewscreens, being part of the holomatrix, could be configured to broadcast any of a wide variety of landmarks and terrains, thereby giving the experience of a terrestrially based cafe or trattoria. Positioned directly in front of the view screens was a more sophisticated holographic staging area that could be utilized to augment the view screens by including intrusive elements such as waterfalls within the lounge, but they could also function as an actual stage for live, recorded or holographic performances. When not otherwise in use, additional seating could be generated.

Working in conjunction with the holographic dancefloor/stage, an equally configurable, dynamic lighting system was integrated into the lounge that could emulate everything from full daylight to subdued candlelight to a rolling pattern of shifting, complimentary colors. In case of a ship-wide alert, these systems were overridden to properly display the alert status. In addition, the lounge possessed an ambient atmospheric control system independent of the rest of the deck that allowed for separate temperature and humidity modulation that could help augment the dining experience projected by the other systems.

Although uncommon, the bar could be retracted into the ground to allow for larger gatherings.

Unusual to most Federation vessels commissioned in the latter 24th century, the Below Decks lounge featured a fully functional galley that allowed for the manual preparation of food above and beyond what was available in the replicator system. The galley was utilized to prepare three standard communal meal cycles, as well as for special events, while the replicators were used for off-cycle meals. The galley included an area for cooking, food prep, sanitation and recycling of left-over materials as well as a service window to facilitate the meal delivery. To ensure maximum safety, the galley possessed an augmented fire suppression system, separate venting and power could be cut to the cooking surfaces at various emergency shut-off points. When not in use, the galley was generally obscured by a holographic wall for aesthetic purposes.

Connected to the galley was a dedicated storage area that maintained several lockers that could be temperature controlled to allow for the storage of fresh food items as well as utensils, spices, non-syntheholic libations, etc. The storage pantry required appropriate security access in order to enter.

Originally designed to serve as an office and additional storage for the lower deck quartermaster and/or proprietor of Below Decks, it was later co-opted by the half-kzinti, Deacon, to serve as his quarters. Although smaller than standard crew quarters, this allowed the proprietor to maintain a personal living space and not merely a work space within direct proximity to the lounge. As it was part of the original lounge design, it also incorporated many of the lounge's features, including the synthetic chromatophores in the walls and carpeting and limited holographic capabilities. The terminal located in the proprietor's quarters provided a live tracking of all inventory and supplies designated for the lounge and provided 24-hour monitoring of the Lounge itself.

The holographic personnel were held to a similar standard of dress as the remainder of the crew and thus usually manifested in uniforms that paid homage to their Starfleet origins, although frequently in purple and grey so has to not be mistaken for an actual crew member. The coloration of their uniforms, however, could and often were modulated to match the decor of the lounge to provide a cohesive theme throughout.

Originally designed and employed by William Regal, the Felicity program was later transferred to the Spearhead Lounge to serve as hostess there, although as part of the ship wide hologrid systems, she could still manifest in Below Decks if so requested.

Named for the Greek concept of hospitality and guest friendship, Xenia was designated as the primary hostess for Below Decks following Felicity's reassignment. She had a cool and professional demeanor and functioned as the proprietor during off-hours.

Named for a minor Celtic god of barley and fertility, Taliesin served as the primary bartender for Below Decks. He was generally warm, welcoming and always happy to lend an ear to those who sought his confidence.