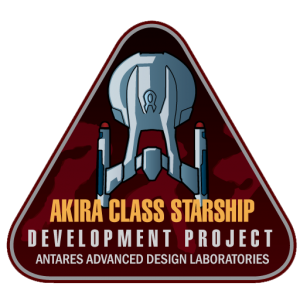 The USS Diamondback (NCC-63598) was an Akira-class starship, commissioned in late 2368. It was one of many Akira-class starships ordered by Starfleet in the wake of the Battle of Wolf-359. As was standard for its class, the Diamondback was heavily-armed and ready for conflict, having been outfitted with fifteen Photon Torpedo launchers across various hardpoints along its Primary and Secondary Hulls, as well as its Main Battle Module. The Diamondback was a veteran ship that’d seen a surprising amount of combat over its relatively short history of service, having earned the reputation as one of the most grizzled and stalwart ships to have patrolled Federation territory, and was seen as a prominent and desirable posting among Officers looking to make a name for themselves.

In 2375, it saw extensive renovations that improved its durability, and overall combat effectiveness.

The prototype ship USS Akira was launched in early 2368, and after a surprisingly short trials period the class went into full production, going on to become one of the most important players in Starfleet. The USS Diamondback was among the initial twenty-four follow up Akira-class ships ordered for construction and deployment by the calendar end of 2368. In a feat which at the time had been considered a monumental achievement in starship construction, Akira-class ships were completed and commissioned across Federation space, the Diamondback and her sister-ship USS Timberwolf having launched out of Utopia Planitia Fleet Yards in early November 2368.

After an exceedingly short shakedown cruise, the Diamondback was cleared to assume full active duty.

As 2368 came to a close, and after having completed transfer of a number of crew and officers from the Galaxy-class USS Discovery NCC-71100, including its former Executive Officer Commander Jordan Musgrave, the Diamondback took up an active posting along the Federation side of the Klingon Neutral Zone in the wake of the Klingon Civil War of 2367 and 2368. The turmoil that had spread throughout the Empire during that time had led to a number of overzealous and aggressive young Captains seeking to stake a claim of personal glory by attacking Federation shipping lines in Federation territory. To combat those rogue Klingon elements, Starfleet adopted a policy of extreme intimidation in an effort to drive them back across the border, and Akira-class ships led the way in a practice that came to be known as ‘Thunder-runs’. For the most part, the Klingons in their older, smaller, and far less heavily-armed Birds of Prey would turn back at the sight of a heavy Akira-class like the Diamondback, charging in with shields raised and weapons ready to engage.

That had in fact been the case for the Diamondback in most of its thunder-runs, until in mid-2369 when it was ambushed by a moderately sized group of Klingon ships that weren’t interested in backing down. In the battle that ensued, the Diamondback destroyed two Birds of Prey, sent a third scurrying away in retreat, and fought to an eventual stalemate with the Vor’cha Class Attack-Cruiser IKS Vek’Magh. As both the disabled Diamondback and Vek’Magh floated adrift in space, it had soon become apparent that damage sustained to the Klingon ships warp-core was in danger of causing an eventual breach, which would likely have destroyed both ships. Understanding the risk involved, an away-team from the Diamondback was dispatched via shuttle to board the Vek’Magh, with orders to fight their way to its damaged core and stabilize it. The mission had been a success, and after stabilizing the Vek’Magh, the Diamondback took it under tow to the nearest Starbase where its command crew were arrested, and later extradited back to the Empire to face disciplinary action.

For incredible acts of heroism in the battle, a number of Officers and Crewman from the Diamondback were decorated with honors, and the ship itself given a prominent service commendation.

In 2375, after having sustained severe damage during the final battle of the Dominion war, and in recognition of the ship’s history as a formidable enforcer, the Diamondback underwent extensive renovation and refit that kept it out of duty for a period of three months. During that time, weapons systems were upgraded in the form of adding two additional Type-X Phaser Array and replacing two of the Burst Fire Photon Torpedo Launchers in the Main Battle Module with two Rapid Fire Quantum Torpedo Launchers. Armor was thickened in key places across the primary and secondary hulls, and the original Warp Core was replaced with a newer more capable Warp Core that increased power output and speed when combined with newer, more efficient and streamlined nacelle designs. Lastly the main bridge module, which had sustained extensive damage during the Battle of Cardassia, was replaced with the reclaimed bridge module of the since scrapped USS Poseidon.

This newer, more daunting Diamondback was to act as a linebacking enforcer for Stafleet in it’s struggles with rivals, give those who sought to capitalize on the diminished fleet in the wake of the Dominion War, something to think about, and ultimately fear.

As of early 2380, the Diamondback, still under the command of Captain Jordan Musgrave, had taken up patrol along the Romulan Neutral Zone in the wake of the Reman uprising of 2379. 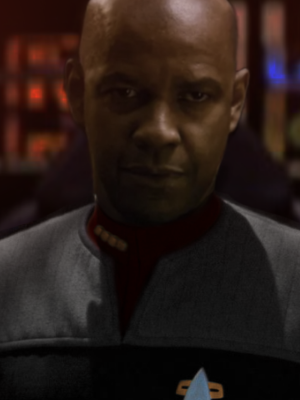 Captain Musgrave on the Bridge of the Diamondback in 2380. 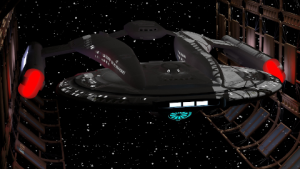 The Diamondback just prior to launching in 2368. 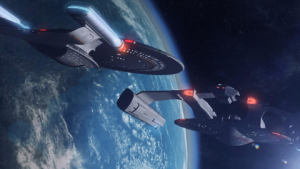 The Diamondback and Discovery in 2368. 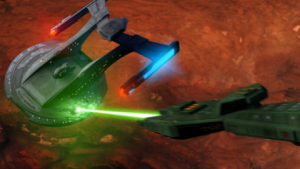 The Diamondback taking a direct hit from the Vek'Magh in 2369. 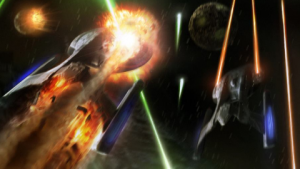 The Diamondback alongside the Timberwolf as its destroyed by Borg forces in 2373.

The newer, more sleek and deadlier Diamondback after her upgrading in 2375.