Before her death, Lieutenant Komial Dotnihl was Chief Security Officer at Starbase 84. Komial Dotnihl was laregely unaware of the parasites that compromised Starfleet Command when the USS Resolve returned to Federation space in 2381. Komial was killed during the Battle of Starbase 84, loyal to her Commanding Officer Ian Hawthorne until the very end.

It had never been her desire, or plan to join Starfleet. Growing up, Komial’s parents had both served in the fleet, and she had seen what that could do to a family. Upon graduation out of the standard education system, Komial had applied to a college on Trillus to continue further education. A peaceful civilian life was all she wanted.

The Borg put an end to that dream, however. Both of her parents were currently serving on the USS Bellerophon, when said ship was summoned to join in the defense of the Sol Sector as part of the fleet gathered at Wolf 359. There was only one StarFleet vessel to survive the battle out of the 40 ships of the fleet - the Bellerophon was not one of them. Lost with all hands in the battle - Komial’s family became two of the 11,000 casualties listed. Needless to say, this devastated the young woman.

After taking a year off to grieve from college, and help with some light rebuild efforts, Komial came to the decision to abandon her previous career and take up her parents Legacy, applying to and receiving admission to the Academy. Her late start career wise would account for her somewhat low rank at the age of 33.

Komial was a typical Starfleet cadet - she wasn’t top of her class, but she wasn’t the bottom tier either. She was attractive enough to have suitors, but no more so than most pleebs, and was mostly too busy to indulge - mostly. She was dedicated to graduating, but not at all opposed to the occasional night of fun. She was hazed, and hazed others herself - no one ever got hurt. Such was the life of a cadet. Driven to graduate, like many who joined after Wolf 359, Komial still managed to have a good time at the Academy.

Post graduation, and Security finishing school, Komial was rushed into the front lines like anyone else coming out in time for the Dominion war. Her service was harsh, onboard small, combat oriented ships, tho her final posting right after the war was a welcome break to the Starfleet Corps of Engineers. She served as a security officer on one of their many ships, helping the relief and rebuild effort across the Federation.

But it was only after she came to SB84 that she began to flourish. She found that she liked the influx and flow of people throughout a starbase, that variety, more than the day to day interactions on a starship - especially the smaller class of ships she'd served on to date. Sure, you didn’t get to see as many new worlds as one might on a ship, but you saw plenty of civilization - it came to you.

Komial found herself fitting in well, and soon worked up the ranks.

It was a nasty firefight, however, that both catapulted her to the position of chief, from deputy, and into the attention of the Starbase Commander. Cardassian dissidents had somehow smuggled components for primitive firearms onto the station. Convinced that the poor end for Cardassia in the Dominion War was all a Federation plot to cripple the once proud people and turn them into a vassal state. It was the kind of terrorist dribble that die hard were capable of believing for millennia now. Why they’d picked SB84 to make their point was anyones guess - Komial never really found out.

All that mattered was that the terrorists tried to take out the starbase. Starting with a firefight in the middle of Federation park, and an attempted assault on the administrative core. It hadn’t succeeded, needless to say, but there had been civilian casualties. And despite her best efforts, one of the other casualties may have been Komial herself - had not the CO showed up in time to gun down the man holding her at phaser point. She’d engaged a small subgroup of the Cardaissians on her own, and in the ensuing fight lost her phaser. And even unarmed, Komial had three of them none the less. But there had been four. Had the base commander not arrived when he did...well.

Despite her own near death, it was clear that Komial had saved hundreds, if not thousands, by her brave actions. Coupled with her predecessor's resignation - the man had been nearing retirement anyways, and that fight drove home a desire to be with his family more than be out protecting the ‘streets’, Komial found herself with a new job - Station Chief of Security.

Since then, she’d blossomed in the role. Crime, such as it were, was down, and the starbase was one more a pinnacle of law and order. Mostly.

Years of training, and steady service in the Fleet left Komial with a strong sense of self confidence. And it showed. It showed in the way she smiled, her strut as she patrolled the corridors of SB84. That confidence bordered on cockyness, but when in combat she went into a cold, calculating state, becoming a calm point in a violent storm holding her ground. She was fiercely loyal and protective of what she believed to be her own, traits that served her well in her position as CSec.

But all traits could be a hindrance - when confidence bleeds into cocky arrogance, detachment to cruelty, and loyalty leads to blind obedience. 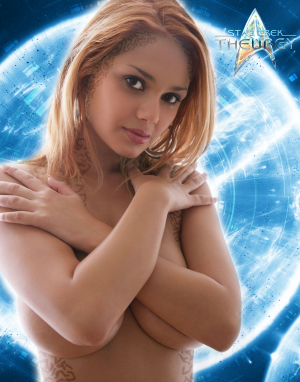 Komial takes great pains to strike a balance between being fit, and being sexy, going out of her way to make sure that not only can she hold her own in a fight, but that she can show off her smooth curves in a more relaxed environment. When in the privacy of her own quarters she's as likely as naught to roam around in an oversized t-shirt. Out and about and off duty, the trill likes to show off her spots, with revealing, form fitting clothes. On duty, she is meticulous in following the regulations for her uniform, though will occasionally indulge herself in a bit of makeup, or less than regulation underwear.

Like all Trill, she has a series of brown spots that trail all over her body, and her temperature runs cooler to the touch than a human would. Some lovers have enjoyed that, some haven't. She lacks the forehead ridges that some of her species feature, and though she has the abdominal cavity that all Trill are born with, she is in fact unjoined, holding no symbiot within her body at this time, and has no intention of ever getting one, either, regardless of how much of a genetic fit she might be. An attitude that sets her slightly apart from the majority of the Trill population.