The Cardassians were a humanoid species from the Alpha Quadrant. They were native to the planet Cardassia Prime, capital world of the Cardassian Union. Cardassians were tall, grey-skinned humanoids with pronounced ridges on their bodies and faces. Their culture demanded absolute loyalty to family and to the state — with Cardassian morality plays often depicting conflicts between familial loyalty and loyalty to the state — and they prize individual cunning, self-control, and the ability to endure hardship. Cardassians were a secretive people, even amongst close friends and family, and being suspicious and skeptical of others was regarded as wise and prudent. They valued educational attainment and knowledge, and they are fond of conversation and lively debate. They were frequently regarded as domineering, ruthless, arrogant, and duplicitous. Cardassians had a xenophobic attitude towards other species, which was well established throughout the quadrant after the Setlik III massacre during the Federation-Cardassian War, as well as when Cardassian atrocities during the Occupation of Bajor were revealed after they withdrew from the planet Bajor in 2369.

Cardassians possessed extraordinary mental discipline, and commonly had photographic memories, the result of intense training during childhood. They were intolerant of cold environments, but quite comfortable at higher temperatures. Cardassian hearing was slightly less acute than that of Humans, and they were uncomfortable in bright light. Cardassians had a negative reputation amongst many Alpha Quadrant cultures, particularly Bajorans, whose homeworld they occupied for decades. The Cardassians became one of the greatest enemies of the United Federation of Planets and the Klingon Empire, when the Cardassian Union joined the Dominion in 2373. Source: Memory Alpha& the Star Trek: Adventures Core Rulebook 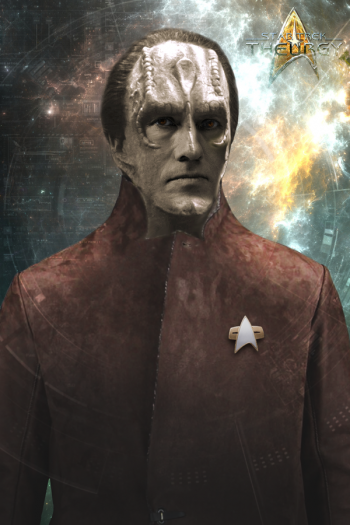 Cardassian characters in Star Trek: Theurgy:
Directly following the Dominion War, the Cardassian Union was devastated - economically, culturally and infra-structurally. Facing immediate collapse, the occupying forces of the Federation as well as the Klingon and Romulan Empires worked to establish a new government. The decision was made to return provisional and operational management of the Union to a reformed Depata Council. The council itself was restructured to become a representative democracy working under an elected leader - the Castilian.

Working together, these governments toiled for many years to attempt to stabilize the region. The Klingons proved security for the outlying planets under the watchful eye of the Romulans, whereas the Federation initiated a number of aid and cultural exchange programs, including the Andak Project which intended to restore agricultural production to the Union. Eventually, the Romulans withdrew their aid in the region because of the Romulan Civil War.

During the rebuilding of Cardassian society, major political parties rallied for support. The 'Reunion Project', led under Alon Ghemor, was designed to empower citizens disenfranchised with the old systems of politics which had led Cardassia to its current state. Promoting democracy, free speech and peace, the Reunion Project won the first major post-Dominion election.

In addition, there were those unhappy with their political standing in the quadrant, and with an aim to prevent Federation ideals seeping into Cardassian society, a hard-line conservative nationalist party was formed to ensure Cardassia rebuilt itself to its former glory. Pejoratively created by members of the Cardassian elite, including several Guls and other officers in the Cardassian Guard, this political party was initally called 'The Directorate' but later changed it's name to 'Cardassia First' in 2380 to distance itself from other extreme nationalist groups.

Following a loss in the first elections, some members of the Directorate were further radicalized against the Federation, believing them the cause for their fall from grace. Attempting to use an old secret society designed to place key members of Cardassian familial elites into the upper echelons of government, they endeavored to gather troops and resources, determined to bring Cardassia back to its 'True Way' by any means necessary. The True Way openly opposed the Andak Project and using said resources tried to shut it down. Following this, the True Way formally became a paramilitary group, however the Cardassian Government considers them a terrorist organisation.