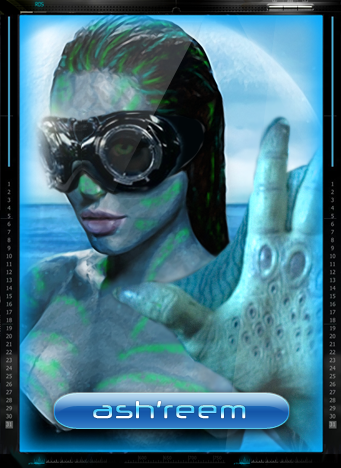 Ash'reem were as free-spirited -promiscuous - as they were due to their low birth-rates and the need to make their species survive. Both male and female Ash'reem had a life-expectancy of 200 years. They were a new member of the United Federation of Planets, first contact being made in 2309 by the USS Illithid in 2309.

Almost extinct, this very rare Warp-capable species of amphibious frog people did not only have so low birth-rates that they would only spawn one child every 100 years, but their planet was dying too - the waters being corrupted by the minerals released from the underwater volcanoes and earthquakes that tore the bottom of the sea apart. Their shore-outposts and underwater cities were slowly coming to ruin. In hopes to procuring assistance for the survival of their kind, they sought to enlist people in Starfleet and assisted in many scientific fields to show their good will. The USS Theurgy had been fitted with residential pool in one of the Senior Staff quarters in order to host the Neotin family.

Their skin were naturally warm and moist. They retained water with their skin and hair in order to survive out of the water for extended periods of time. Prolonged dehydration was fatal.

All Ashreem had six webbed fingers, four regular ones and two thumbs, one on either side of the main four. At the centre of the palm of an Ash'reem, a secretion duck synthesised and secreted a thick paste that encouraged cellular regeneration and growth, while acting as an anti-inflammatory agent and antibiotic. This was a key component to their long life-expectancy, where they used the paste to regenerate each other.

Ash'reem bones were naturally hollow and soft, only being comprised one fourth by actual bone the rest being cartilage. This made Ash'reem extremely flexible yet sometimes seen as clumsy when walking, often seeming to sway slightly on their legs, but they were exceptionally graceful in the water - seeming to fly more then swim.

They had pheromone ducts underneath their arms, three on each side, where the top one emanated their own feelings and the other two were sensitive receptors that picked up on the environment around them. That was why they wore plastic bio-wraps underneath their uniforms, to suppress the full effect and not disturb other personnel on a starship too much by projecting their feelings and state-of-mind upon others.

Both male and female Ash'reem exhibited hair on their heads but nowhere else in their bodies. Ash'reem hair served a function of water retention, readily absorbing water into itself and holding onto it slowly feeding it into the scalp to replenish lost fluids. Their hair's silk-like feel assisted in retaining water around their scalp and absorbing it from their environment, allowing for long trips out of the water. However most Ash'reem required a bath or shower at least once every fourteen hours to remain healthy. Dehydration set in after thirty six hours.

Ash'reem eyes were always exceptionally large, as they evolved to live and hunt in dark waters. Ash'reem eyes varied in colour although green was the most common. They had to use goggles in light environments since they lived in the dark waters normally. Prolonged exposure to bright light would damage their eyes permanently.

They had no true ears, instead having an external tympanum that covers where a human ear would be and more delicate inner ears to discern subtle notes within the greater sound. Ashreem communicated amongst themselves with their pheromones and body language more than words. Although they were fully capable of communicating verbally, as in using Federation Standard, they found it awkward at times. Their natural spoken language was in the range of infrasonic waves that were inaudible to many other races.

Ash'reem lacked teeth as most would consider them, instead having a stretching tongue and rough muscular plates inside their mouths that helped grind up food. They were quite agile with their tongues and able to thrust them out of their mouths with effort, and then much like a squid can control its arms movement, it could be used to show affection. Extended, their tongues could stretch two feet. It is an evolutionary relic from a time where they used their tongues as close-quarters weapons, and they could still break bones with the impact if they thrust their tongues out - their whole gullet and chest supporting the oral attack.