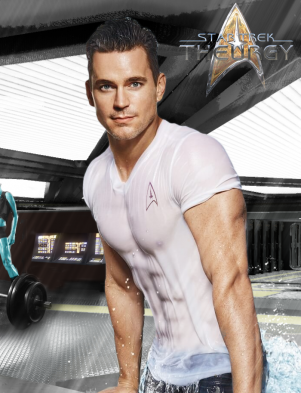 Salem Martin was the Acting Chief Tactical Officer on the USS Cayuga. As of March 2381, he served on the USS Theurgy, aiding in the opposition against the parasites that compromised Starfleet Command in the end of the 24th century.

Lieutenant Junior Grade Salem Martin grew up with his twin sister Vivian Martin in a small mountain town in the peaks of the planet Edessa. He grew up feeling more or less isolated from the rest of the people around him, his mother was often away because she ran a cargo vessel. His only real friend during that time was his sister. The twins' only real interaction with the outside universe were when their father would take them to the capital of Edessa and they would get to talk with many of the Starfleet personnel who came to their world. While Vivian often loved the stories of the other worlds, Salem would do what any boy his age would, and ask about the battles, and ships in service to the fleets. He found games of strategy to be infinitely fun at that age, and always dreamed of one day making admiral in rank.

At the age of sixteen in 2363, a Starfleet recruiter visited Edessa and spoke to Salem's class, it was pretty much all that he could talk about for a number of weeks after. No matter what happened after that day, Salem was confident that he would have that uniform one day. When he came of age and attempted to join Starfleet Academy in 2365 however unlike his sister he didn't pass his entrance exam. He had never really shared Vivian´s test scores or acute mind. So, barred from entering the academy for a year, he instead enlisted to enter Starfleet boot camp. When his training was over he was a Crewman 3rd class, and over the next four years he would work his way up to become a Petty Officer 3rd class in the Tactical department aboard Starbase Epsilon, which was located near the Cardassian Union boarder.

In 2368, a new class of ship was rolled out by the Utopia Planitia Fleet Yards, the Akira class, and in 2370 with tensions uncertain between the Cardassian Union and Federation Salem requested a transfer from Starbase Epsilon to the USS Britannic. The Britannic was on patrol near the Cardassian-Federation boarder in 2372 when it was struck by a mine and crippled. With it's navigational systems damaged, it made a turn into Cardassian territory where it was attacked. Official records of the attack would stated that the ship was destroyed, it's crew of five hundred souls killed in action. During the destruction of the ship, however, Simon and about 200 others tried to abandon ship but were subsequently taken hostage by the Cardassian Union as prisoners of war.

Salem was brought to a Cardassian prison camp on Kalevia, where he and the other members of the Britannic's crew were put to work. During this time, Salem set his mind to breaking out of the prison he had been placed in. He set his mind to working over the problem like one of the tactic games of his youth, he would speak with other prisoners, and became a sort of community leader among them. Which, of course, meant he was also one of the favorites of the guards and wardens to beat on. For two years he was tortured and put to work as he planned out an escape with the other prisoners from the Britannic. The only thing he needed was a shuttle with warp capabilities.

The movements (and sacrifice) of a surviving remnant of the fringe group known as the Maquis presented a delay in the usual routines during the Dominion War, and Salem and the other prisoners made use of the short vulnerability in the rotation of the Cardassian guards. Salem and twenty others were able to stage an attack, taking over an armory in the camp, and with a handfull of Cardassian weapons, they were able to commandeer one of the shuttles, and leave the planet. By the time the larger ships arrived from the delay that the Maquis had caused, Salem and his men were already in the demilitarized zone.

Salem and his men rallied to the Kalandra Sector, and managed to get to Starbase Epsilon, where he had started his career. There was a brief diversion to Earth where Salem was given the Christopher Pike Medal of Valor along with the other survivors he had managed to bring home, but was not able to press for his real goal, which was getting a fleet to go back to Kalevia, and free the others that he had to leave behind. Yet it was the height of the Federation's conflict with the Klingons, and Starfleet was stretched thin. Simply put, they didn't have the resources to launch an attack to a location so close to Cardassia Prime. Given the choice and the situation, Salem returned to service, and moved up to a Chief Petty Officer. The next ship he served on was a Galaxy-class vessel the USS Demeter, which was present for the Battle of Cardassia.

During the Treaty of Bajor's signing, as all things were being restored to their pre-war status, the Demeter was tasked with refugee and prisoner shuttling. One of the clauses of the treaty was that all prisoners of war were to be returned to their proper homes, which meant that only a year after he had left them, Salem was allowed to collect the men and women he had left behind on Kalevia.

So, at the end of the Dominion War in 2375, at the age of 25, Salem was able to put Kalevia behind him as they arrived on the prison camp to take the survivors of the Britannic home, of the original crew of five hundred, only sixty had survived the war. It was a day that Salem widely regarded as the happiest in his life. In 2377, Chief Petty Officer Salem Martin finally took the Ensign test, and passed.

In 2378, Salem transferred to the USS Cayuga, where he served as a Tactical Officer. He was promoted to Lieutenant Junior Grade in 2380, and in February of 2381, the Cayuga was sent into the Azure Nebula.

There, the ship was struck by what most considered the impossible; a Borg Cube. During the attack, the Cayuga was set adrift, and its Chief Tactical Officer was killed. Salem was made Acting Chief Tactical Officer since then aboard the drifting Cayuga, and personally spent the time overseeing the retrofit of a tri-cobalt explosive torpedo. A last-ditch defense in case they meet the Borg Cube a second time.

In 2381, sadly, his sister Vivian Martin was fatally injured in an explosion onboard the ship. She has been put into stasis at the agreement of the Chief Surgeon Kate Foster and Salem himself.

Tactical officers were men selected from the Academy on account of superior intelligence, reliability and mechanical knowledge. The assignment to Tactical was made with the idea that the officers should be somewhat higher in standard than other officers in regard to starship weaponry and their usage; that their knowledge of ordnance and targeting should be such that they would be able to both make repairs to the systems, and to be able to work without them.

In his youth Salem wanted nothing more than to be a war time commander. He studied the art of war, and could have easily been considered a glory seeker. Nothing changed one's opinion more than having been a prisoner of war. The current Salem was no longer hungry for war, he was burned by it. He was strong willed, but that could boil over to stubbornness.

Salem had been wracked with night-terrors ever since his escape of the labor camp in 2372. He suffered from this affliction which he has been medicated using sleeping pills. He also had a xenophobic streak against Cardassians.

Salem would often take care of others over his own well-being. Since his time in the labour camps, and his youth spent looking after others, he had become extremely empathetic to the plight of people suffering, and had a difficult time turning away requests for help. He was the type of person who would drag someone else kicking and screaming to sickbay.

His memories of the labour camp often return to him at times of stress and ever since the incident which hurt his sister, Salem has found less and less desire to focus on weaponry and battle tactics. He knows his job and knows it well, but when he comes to think about weapons to cause hurt and destruction, he pictures his sister there in the Spearhead Lounge and falters.

Salem has always been career focused and as such, his romantic endeavours have been limited to fleeting advances and hasty hookups, but in losing so many of those around him, his loneliness has caused him to start rethinking his approach to romance.

Salem was held in a Cardassian labour camp for two years; his back had scaring from some of the more extreme torture methods they used on him because of that. When he had emerged from the camp, he was malnourished, but not weak, physical labour has a tendency to increase one's physical strength, and after he got out he started to take more physical activities such as fencing. As such most would note that Salem was strong and physically fit for a human. Starfleet Medical staff did what they could to restore his back, but despite their best efforts, they could not mend all of the scarring, since doing so might cause further damage deeper down in the tissues of his back.

He shared his sisters strong jawline, brown hair's and eyes. He was tall for a human standing in at 6'0" though with a stalky build. Salem however was more modest than his sister, and was rarely seen without a shirt on.