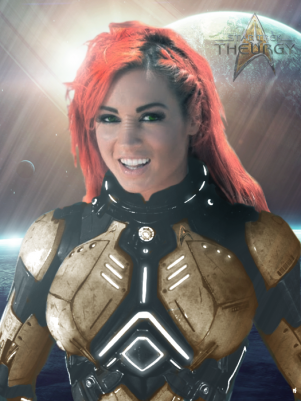 Before her death, Lieutenant Winter Kestra Bannin was the Chief of Security aboard the USS Cayuga when it was attacked by the Borg in the Azure Nebula. It remained unknown if she would join the crew of the USS Theurgy in it's battles against a corrupted Starfleet Command in the late 24th century, since she was killed by Asurians aboard the Cayuga before then.

Winter Kestra Bannin was born on the Cestus III colony the daughter of Aelun Bannin and Nalas Gerron and despite her father being Bajoran, he grew up during the occupation of his home world and with what was left of his family fled the home world where he left everything connected there behind, even to the point of refusing to follow the beliefs of his people.

Winter had a somewhat stable home life as her mother was a teacher and her father was a civilian engineer but she would occasionally get into fights due her mother's genes giving her access to limited telepathy which allowed her to read emotions and thought patterns but she would never be accepted as a full member of her mother's people, but everything changed one day in twenty three sixty five when her father jumped at a chance of a lifetime and was temporally assigned to the USS Enterprise-D and the rest of his family would join him a couple of months later after the end of the local school year.

One day while doing her homework after school when she was eleven, a couple of star fleet officers came to her home and gave her mother the bad news that her father had been killed when the section of the Enterprise's saucer section was cut out by a hostile force that the ship encountered called the "Borg" which broke her mother and lead to Winter having more problems at school until a friend of the family, Chloe Baral, took her under her wing and helped to understand that her mother needed her among other things and the fighting stopped for a while.

Shortly after she turned seventeen in the early part of twenty three seventy one, Winter decided to follow Chole's example and told her mother that she was going to join star fleet which she agreed to and she was on her way to Earth as she chose security as her primary field of study and while she was there she made a few friends but one in particular, Lydda Davis, helped her to come more out of her shell in their first year and the two became inseparable even to the point of Lydda being her first lover which helped to give Winter some semblance of a stable life in a universe that was slowly growing closer to a war.

When the Dominion War broke out during their third year at the academy, both women were assigned to the refitted Ambassador-class USS New Jersey as the need for qualified officers became great in the aftermath of the Klingon War the year prior caused all cadets in their third and fourth years to be moved to active duty with Winter being a security officer and Lydda as an engineer.

For the entirety of the war, Winter served on the New Jersey under Captain Kalmus of Vulcan where she was a part of several of the battles of the war including the horrible battle in the Tyra system where her ship was one of the fourteen ships of the seventh fleet to survive in 2374.

However tragedy struck Winter as during the Kalandra Campaign towards the end of the war, the New Jersey was hit in the engineering deck by a Jem'Hadar torpedo and Lydda managed to save the ship at the cost of her own life and Winter's life was shattered for a while.

Winter took some leave after the war to return home to properly mourn her loss and reassure her mom that she hadn't become a total stranger, she revisited some of her old haunts and reconnected with those friends of hers that she had lost contact with after the war began which helped to ground her which slowly but surely allowed her to heal and learn to smile again.

At the end of her leave she found herself assigned to the USS Highlander, one of the new Sovereign-class ships, as a security officer and went about her duties without any problems, even taking apart of the occasional ship talent shows but she turned down an offer to join the Enterprise-E´s security department on the grounds due to personal reasons.

She was starting to spread her wings fully when in May of 2379, she was assigned to join the security department of the USS Dauntless, an Akira-class star ship and did well there and eventually was promoted to the rank of lieutenant junior grade, but it was also during this time that the Dauntless came across a Syndicate due to a piece of evidence that Winter came across by accident during the course of a separate operation which ended an attempt to use the planet of Hedra as a cornerstone of a smuggling racket for the narcotic Bericol.

In late 2379, Winter was called into the office of her department chief on the Dauntless in Lieutenant Commander Jazmin Alpha-two who told her that she was being offered a chance to be the assistant chief of security for the USS Cayuga under Lieutenant Hiro Toren who had headhunted her for the position following the loss of his previous deputy chief to another ship and after a little bit of thought, Winter jumped at the chance.

Winter arrived on the Cayuga and finally felt like she had a real chance to spread her wings even wider as the ship was a long range explorer which meant more time to get to know her fellow crew mates and advance her career as well but being a deputy chief was a lot different then just being a regular officer and sometimes she was able to interact with her new captain, Anya Ziegler, and found herself intrigued by the older woman but decided to focus on the job instead and became a somewhat regular fixture around the ship wit her eventual promotion to full lieutenant shortly before her birthday.

However one day a piece of Winter's past caught up to her.

The Cayuga was doing an exploration mission of the Azure Nebula and it was going well until a Borg cube appeared, catching the ship by surprise but even as the crew fought valiantly, Lieutenant Toren was killed and she took on the mantle as the chief of what was left of her department without any hesitation despite the lingering fear that existed as she remembered what happened to her own father over a decade before and swore that not one more of her fellow shipmates would suffer that fate.

Later, after an encounter with the USS Theurgy and Asurians that had vowed vengeance upon all of Starfleet, she was killed in the line of duty.

While on duty, Winter was a professional, usually staying quiet and observing everything that goes on around her in order to evaluate possible situations and trying to create tactical plans to counter any possible threat situations and displayed a continuous urgency about investigations that she pursued - a very professional soldier of the Federation while on the clock.

Off duty on the other hand, Winter was laid back and enjoyed spending time doing things like sitting in the lounge and drawing or just generally hanging out and listening to music with her friends but she preferred to keep her on duty and off duty lives separate.

Despite having discovering her interest in both men and women at an early age, she was picky about who she took to bed with her and was a very loyalty problem, to the point of fighting for those that she cared about, but past pains had usually caused her to keep most people at bay in that regard.

Winter enjoyed drawing and did so rather artfully as she had quite the eye for detail, which allowed her to capture details in her drawings that showed that in another life, she might have been quite the professional artist.

After the death of her father in 2365, during first contact with the Borg when she was still a child, she had a closeted fear and hatred of the race.

Winter was an attractive, curvy yet muscular woman, which was a testament to her workout regimen. She had vibrant red hair that descends in waves down her back past her shoulder blades, and a pair of deep green eyes that seemed to be piercing at times. Her eyes, however, are a different shade than the Betazoid norm due to her half-Bajoran heritage, which also granted her a slightly less pronounced nose ridge more common to full bloody members of her father's race.

Winter worked out like it's a religion and it showed by how muscular she was and her flat belly, but the way that she conducted her exercise routine had given her body a slightly curvy figure. Due to her mother's genetics, she also had a perky yet plump bust despite how her body was shaped.

Like most half-Betazoids, Winter could read emotions and the thought patterns of other sentient lifeforms, which she had actually trained herself to focus on one singular thought pattern. However, due to this, she refrained from playing games of chance unless it was apart of an undercover operation.