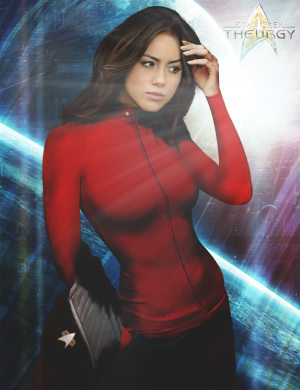 A variety of psionic abilities were found in numerous species throughout the Milky Way Galaxy.

Another common psionic trait, empathy allowed individuals to sense, interpret, and influence the emotions of others. Many telepathic species also had empathic abilities. Empathy is quite common in offspring produced of a telepathic and non-telepathic union (i.e. Betazoids, Napeans, Vulcans).

Most telepathic races could create strong telepathic bonds, both on a conscious and subconscious level. The Vulcan psychic bond is shared between bonded individuals; they could share thoughts, feelings, and images even with a non-telepathic mate. When Betazoids reach a deep, emotional connection, they can speak mentally with their beloved even if the other is non-telepathic. Something happened in that connection that altered the brain, both in the telepath and non-telepath so that, even if only subconsciously, a connection was there in a more permanent state than would be normal. Distance would mitigate, or even block the connection of these links. But it could operate over a longer distance than normal because of that familiarity connection. They knew what they are looking for in the sea of thoughts, rather than trying to sift through them normally to find a single voice.

A rare ability amongst some telepathic races (not Betazoids, Vulcans and others which have not shown this ability in Star Trek canon), psychometry allowed individuals to explore or even interact with past memories. Certain races (i.e. Ullians) had a natural affinity for it, however, and could even manipulate the memories of others. Psychometry rituals and therapy techniques are used to help heal psychic traumas.

Some species (i.e. Ferengi, Breen, Câroon) naturally evolved to resist the many forms of psionic senses.

Telepaths can read thoughts, empaths can read emotions. The only exceptions are when reading the minds of species with four lobed brains, most notably, the Ferengi, or when a Câroon's energy body act as a kind of jamming field. The ability of a telepath or empath can be easily referenced using the following table:

When writing the reference, include a T before the number for a Telepath (T3), an E for an Empath (E5) or P for Psionic, meaning both T and E (P4). Use DM, CWM and NR for readability rating. For instance, Ferengi would be listed as P0 NR because they possess no psionic abilities (P0) and are non-readable (NR) due to their four-lobed brains.

Using the same rating system as above, here are characters in Star Trek: Theurgy with unique ratings due to different reasons, making them stand out from the norm of their species. They could also be hybrids of different species, which might give them a unique psionic rating.

Some info, like the original layout of the rating system, is used with permission of USS Wolff CO - granted Nov 1, 2016
Rules inspired by The Basic Rules of Telepathy & Empathy by Fleet Captain Hollis and Fleet Admiral Wolf at Starbase 118