Before dying in the Battle of the Houses, Varder Ridun was a Security Officer aboard the USS Theurgy. He sustained heavy injuries during an engagement with Task Force Archeron as the Theurgy escaped Federation space. He was put in stasis to preserve his life, and in March of 2381, he was given the medical treatment needed to be able to return to duty. Varder Ridun aided in the opposition against the parasites that compromised Starfleet Command in the end of the 24th century.

Ridun was born during the Cardassian occupation in the year 2351, in an unremarkable village located within the Lonar Province on Bajor. Throughout the first sixteen years of his life, stories of the resistance were prominent, and so were the aftereffects of their actions. However, all the Cardassian retaliations served to do was provoke the young man into acting. The final straw was when his parents simply vanished. Only a week later would they show up in casualty lists.

He managed join up with a resistance cell, known as the 'Bukar', where his agility and rather slight frame came in useful, especially for getting into places most couldn't for the extra edge against the Cardassian occupiers. Throughout his time in the resistance the Prophets were often spoken of and revered, though he himself found little reason to follow gods whom would not help their "Children", instead choosing to tentatively observe it as a matter of culture.

Eventually, the occupation ended, the resistance was reorganized into the Bajoran Militia and Ridun found himself receiving formal training and some degree of formal education in addition to what he had already learned in his life so far. During his Bajoran Militia service, Ridun reached the equivalent rank of a Crewman First Class. The time of his service was relatively uneventful, with little Militia involvement in any conflicts until Bajor's eventual induction into the Federation.

It took the better part of two years for Ridun to transfer into Starfleet from the Bajoran Militia. He completed a basic four-month familiarization and training course before being assigned to his first post on the USS Angelo at the rank of Petty Officer Second Class, an elevated rank because of his experience in the Militia. It was aboard the Angelo that Ridun would encounter the then Lieutenant Nicole Howard, a person whom he grew to respect over their varying interactions on the small ship. He was later transferred to the USS Theurgy around the same time as her.

Ridun had been with the Theurgy for only a short time before the startling discovery of Starfleet Command being compromised by some unknown species. Ridun was frustrated and saddened by both the discovery of their plans and the ensuing chase across the Alpha Quadrant by other elements of Starfleet. The idea of being branded a traitor hurt Ridun, but he understood that the only way that would change was to hold onto the truth until the end. This was perhaps a conviction made easier by having very few people within Starfleet that he really knew.

One thing that made his decision easier was the presence of another former Bajoran resistance fighter in the form of Wenn Cinn, the Chief of Security aboard the Theurgy. Cinn was definitely a man to respect, although Ridun had only limited interaction with him outside of duty.

During one engagement with Task Force Archeron, Ridun was on standby with other security officers in case the Theurgy was boarded. The ship was hit just beside his location, the impact throwing him and wreckage around. A large chunk of which protruded from his chest and upper abdomen, damaging or destroying several major organs including one of his lungs. Fortunately, others nearby were far luckier and managed to get him into stasis.

Ridun had a strong will and an unshakeable sense of loyalty to those he found himself around and placed his trust in. He often seemed quiet and reserved, unless he had some reason to trust the people he was talking with on a more personal level. This may have been a result of life under occupation with the Cardassians.

He had little if any faith in the Prophets, however, he did continue to outwardly practice the more public aspects of the Bajoran culture, mainly the earring. Which was more worn out of respect for his people than any deep personal reasoning.

One of his perhaps more obvious flaws was a general refusal to give up, even when the odds are ultimately against him.

With dark brown hair and blue/grey eyes he had an unintentionally intense gaze, just under his chin, on the left side trailing just down to his neck is an older scar which he deliberately kept as a personal reminder. His hair was kept relatively short and slightly unkempt whilst his face was either clean-shaven or sporting light stubble. His body was more on the slight side, as was not unusual for those raised under the occupation, however it was well built and looked after, and while not perfect was nothing to snark at either. 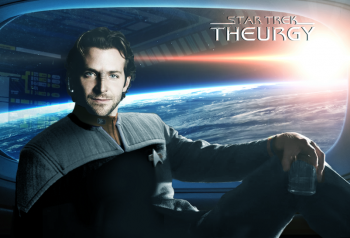