A Reman soldier posted to a hidden base on the planet Bacury III, Lorad's world was shaken apart by a surprise attack by the Romulan Star Empire. Pushed onto a small gunship by his Romulan step-mother, he and his half-sister escaped just before the base self-destructs. Now lost and alone, the siblings face an uncertain future. As of March 2381, it was unknown whether or not Lorad aided in the opposition against the parasites that compromised Starfleet Command in the end of the 24th century.

Born towards the end of 2354, Lorad grew up within the Reman work camps that dotted the landscape of Remus. His life was relatively normal for a Reman, spending his days in the company of his mother, Minuk, rarely seeing his father as he was away performing his duties as a Reman soldier. When the Romulan overseers came into the workcamp to gather up fresh workers for the mines, Lorad's life was upended when his mother was executed as an example to the others. Alone, Lorad was taken in by his mother's sister, an aunt that Lorad's father had turned down in favour of her sister. And so, the malicious lies began. It would be more than a decade before Lorad discovered the truth.

Nearing his 18th birthday, Lorad's day in the mines was disrupted by a group of Reman and Romulan military officers searching the mines for new shocktroopers. Within this party, stood Lorad's father, Jatuk. And the recognition was mutual. Seeing an opportunity to get his son out of the mines, Lorad's father pointed out his son to his commanders and, after a moment's consideration, was allowed to recruit him.

Taken from the mines, Lorad was instructed in the ways of combat. Weapons, tactics, strategy; his mind soaked it all up. Until the day he crossed blades with his father on the sparring field. The sparring match soon became a duel as years of anguish, pain, resentment and abandonment came flooding out despite all the training he had received. But he couldn't defeat his father, nor could his father find fault in what his son thought. All he could do was tell him what had really happened. How he had been denied a return to Remus. His injury during a border campaign. How he had been treated by a Romulan doctor, Pakena and the two had fallen in love. How they had had a daughter, Samala, together and when her fellow Romulans had found out, they had cast her from their presence; forever to spend her days among the Remans. Hearing everything his father had experienced and then meeting his half-sister and her mother, Lorad realised everything that his aunt had told him was a lie, meant to turn him against his father. And it had almost worked. But now he could change.

Learning from his father, Lorad became a model soldier. By the outbreak of the Dominion War, Lorad had reached the rank of Decanus and commanded a squad of shocktroopers. By the end of the war, he had not only received the characteristic scar on his back but also been promoted to the rank of Tesserarius. His rank and service taken into consideration, Lorad was transferred to a hidden Reman facility on the Class L planet Bacury III. He was joined there by his father, sister and step-mother.

Life there was an uninteresting series of drills, training and patrols interspersed with small raids on different bases that left no survivors. A Reman leader, Shinzon, was building ships here and they sometimes had to procure materials. In late 2378, one of the 3 larger ships being built was launched while construction on the other two continued; along with many smaller ones. With Shinzon's death, production slowed but continued enough for the two ships to be completed in late 2380.

In early 2381, a surprise attack by the Romulan Star Empire occurred that disrupted everything. Before he knew what was happening he was being pushed onto a ship along with his sister and told to leave even as his father was firing at Romulan attackers. Ordered to protect his sister and entrusted with his father's weapons, the two siblings left the base under fire before managing to engage their cloak. They remained in the system long enough to witness the detonation of the base's self-distruct. With nowhere else to go, the two decided to try and reach the Reman world within the Klingon Empire, just as they had once discussed with their parents.

Making their way through Romulan space, the two siblings tried to keep as low a profile as possible but a resupply stop on the planet Miroth V ended with a running street battle between the two and a Romulan patrol. Making their escape in their ship, they took multiple hits from a Valdore-class Warbird before engaging their cloak. The hits damaged their sensors, transporters, shields and warp drive.

With the damage they had received being largely irreparable, the two decided to expedite their journey by crossing into Federation space before traversing the Azure Nebula into Klingon space. They felt this was a safer move given the tension between the Romulan and Klingon governments.

After entering the Nebula, Lorad was keeping watch on the sensors when they detected a large vessel nearby. Noticing that it was stationary, he moved their ship in closer but in doing so, detonated a pocket of sirillium gas. The explosion rocked their ship, causing extensive damage. Rushing to his sister, he found her lying on the floor of her quarters, bleeding heavily.

Not knowing what else to do, Lorad had to make a decision; attempt to contact the ship nearby for help or watch his sister die in his arms.

On March 30th, 2381, the 20th day of the USS Therugy’s respite at Aldea, Lorad’s request to join the ship’s crew was confirmed. He was appointed the rank of Petty Officer 3rd Class and assigned to the vessel’s Security Department.

Lorad, despite the typical Reman upbringing he received in a Romulan dilithium mine, is surprisingly well spoken, in a slow, formal way. The lessons Pakena was giving to Samala that he was able to join were able to teach him a lot of the basics when speaking English but it was far from a complete education. For instance, Lorad knows nothing of contractions and so does not use them. His vocabulary was also limited and he tended to use the same words over and over again. It also took time for him to construct his sentences as he worked through the words to use in his head before he said them.

His time as both a slave and a soldier left him with a very blunt viewpoint of the world but it was the lies that his aunt told him about his father that would have the greatest impact on the young soldier. Or rather, finding out that they were, indeed, lies. Feeling betrayed, Lorad bade his time until his training was completed before making his way back to his aunt and avenging himself upon her for destroying his trust in his father. And he did so in a very ruthless and sadistic manner.

Once in the hands of his father however, Lorad's spirit was moulded in positive ways as well. He became very dependable; if he said he would do something, it got done. He was taught patience, to observe and learn before jumping into action but also being prepared for action if the need arose suddenly. Honour was also drilled into him.

He treasured honesty and those that lied to him, earnt his watchful and distrustful gaze from that point on. Lorad was not in the habit of giving second chances. Except where his family was concerned. His family was the most precious thing in the universe to him. And he would do anything to protect it, even if it cost him his own life.

In all, his life had turned Lorad into a coiled spring waiting for release. Always watching from the shadows. Lorad knew he was a killer and feels let down by the actions of his past but despite everything he has been taught, doesn't know what to aspire to beyond a protector to his sister; the only family he believes he has left. 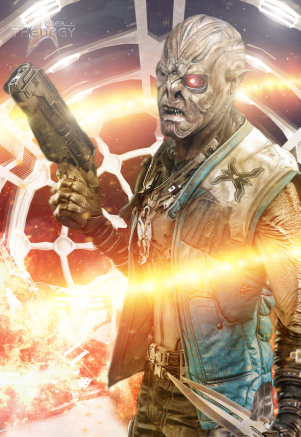 Lorad was tall and rather bulky for a Reman soldier when compared to those who serve aboard starships. This could be attributed to his extended time stationed on Bacury III and the expanded diet the local environment provided. His tanned skin was also a common feature of Reman's stationed here.

To protect his eyes from bright lights, Pakena fashioned a visor that dulled the incoming light down to comfortable levels without losing contrast. It also had alternate Infrared and Ultraviolet visual modes.

His hands ended in functional claws that extended straight out from his fingers. Lorad favoured the wearing of long gloves that extended up his arms to his elbows but left his claws out for use.

Lorad possessed several shrapnel scars on his lower left abdomen, near his hip as well as a prominent blade scar running down the right side of his back from his shoulder to where his ribs end (Outside of his scapula). Lorad had an interest in tattoos but did not have any, yet.

Perhaps the most striking aspect of Lorad was not what he looked like but how he sounded. Utter silence surrounded him, whether he was standing still or moving but as soon as he spoke, his distinctly deep voice caused all eyes within earshot to turn towards him.

Following injuries sustained during the Battle of the Apertures and his near assimilation by the Borg, Lorad now has several cybernetic prosthesis and implants. His right arm was replaced at the elbow along with his left eye. Lastly, his heart was replaced with a Duritanium one.

Despite building up a tolerance for brighter lights and possessing sunglasses for his eyes (provided by his step-mother) Lorad preferred lowlight environments. Like all Remans, especially bright lights or environments were painful.

Lorad was a skilled marksman and melee combatant due to his military training and experience. However, he was only a very average pilot. His recent experiences during his and his sister's escape and journey through the nebula have left him with a fear of being in control of a spacecraft.

Lorad possessed a customised Reman Distruptor Pistol that his father gave him. He also had his father’s knife that he wore at his left hip. His own knife, he has moved down to a sheath in his right boot. He also generally carried several more knives on his body if possible.

While on Bacury III, Pakena was able to acquire several Federation holonovels and translated them into Reman for the base's inhabitants. Lorad was drawn easily to a pair of Western programs.

Images partially made by production photos from Star Trek: Beyond, using an alien named Zavanko as a basis to make this Reman, combining it with images of Remans in Star Trek: Nemesis. The actor playing the alien from Star Trek: Beyond - Kim Kold - looks nothing like Lorad, so the character appearance is to be considered CGI. Due credit for the apparel also goes to the fantastic 3D artist Ben Erdt. Make sure you go check out his awesome gallery. Backgrounds made using stock images from Shutterstock.