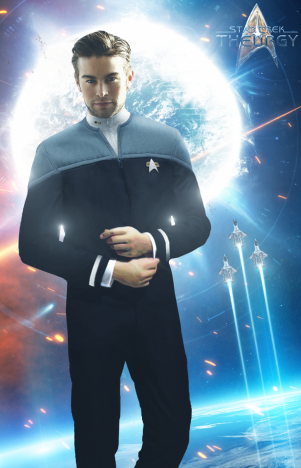 Lieutenant Junior Grade Callax "Cal" Valin was an Ardanan Starfleet officer who served the United Federation of Planets during the 24th century. He served aboard the USS Jadestone as a Flight Control Officer before beginning training with Starfleet Astronautical Command at the Iota Eridani Training Facility. After a rogue trainee compromised the facility, Valin was rescued by the USS Oneida before transferring to the USS Theurgy. Valin aided in the opposition against the parasites that compromised Starfleet Command in the end of the 24th century.

Callax Valin was born on Ardana in the Mu Leonis system in 2354. He was born to a city-dwelling family that had resided for generations in Stratos, the planet's capital city famous for its anti-gravity generators which kept it suspended kilometers above the surface of Ardana. The Valin, considered one of the more conservative Ardanan families that had originally opposed the integration of the troglyte caste, attempted to instill in its members traditional values from an early age with tutors extolling the ideals of duty, obedience, and pride. Valin's upbringing was no exception and for much of his childhood he was even restricted to meeting only children from other city-dwelling families. That is, until he reached the age of thirteen and was able to enroll in the Stratos Institute.

The Stratos Institute was a preparatory school for Ardanan youths that had existed for centuries. Prior to the Great Disruption, it accepted only applicants from city-dweller families; however, with the enforcement of strict integration policies, its doors were now open to ethnic troglytes. It was there that Valin made his first troglyte friends though that process was not without its difficulties. Years of reinforced misconceptions had initially made him unsociable and reticent around his troglyte classmates but eventually his apprehension eased.

The Institute followed a strict curriculum that allowed little time for leisure. Mathematics and the sciences made up the bulk of Valin's studies as it did for every other student enrolled at the school. Ardanans were renowned anti-gravity scholars and engineers and much of that expertise began in the preparatory academies on the planet. Beyond the core academic subjects, Valin took part in physical training programs and studied piano, an Earth instrument relatively new to Ardana at the time. However, above all else he enjoyed flying. Flight training was a popular elective at the Institute that rose above the clouds and despite being an all-around gifted student, flying was where Valin excelled the most.

After graduating from the Stratos Institute in 2372, the question of Valin's future was posed to him. Exposure to other cultures and the ideals of the Federation during his time at the Institute made him dread the idea of the mundane life in politics that his parents had pursued. Not content to live the rest of his life on Stratos he enrolled in the Starfleet Academy Preparatory Program and later that year was accepted into Starfleet Academy.

After an initial spell of culture shock, Valin settled into life fairly well at the Academy. Life on Earth was its own adventure and rather than return to Ardana during his breaks he took the opportunity to explore more of Earth. He went hiking in the French Pyrenees and attended operas at the Teatro alla Scalla in Milan. He even took up the challenge from a classmate to try skiing with which he found limited success and many bruises. While Valin did not have many friends, the few he did have remained close friends even after graduation.

Following the advice of an academic advisor, Valin completed three years of traditional study at the Academy before attending the Tactical CONN Academy for his final year. He specialized in flight operations of the AC-205 Mk I Valkyrie fighter which came to replace the training craft operated by the Academy near the end of the Dominion War.

Upon graduating, Valin accepted a commission as an ensign and was assigned to the USS Jadestone, an Akira-class carrier as a pilot and Flight Control Officer. He received flight training in the AC-307 Mk II Valkyrie, a warp-capable fighter that had been brought into service earlier that year. Given his previous flight experience, he adapted quickly to the faster and more nimble fighter.

For four years he served aboard the Jadestone, eventually earning a promotion to Lieutenant Junior Grade in the early half of 2380. His time aboard the starship was relatively uneventful with the vessel not seeing much major action. Many of his duty shifts found him in the cockpit of the Mk II Valyrie flying training missions and running drills. He had an aptitude for piloting that did not go unnoticed by his superiors and in early 2381 he received an offer to train under Starfleet Astronautical Command.

Accepting the offer to begin tactical CONN training, Valin left the Jadestone and was transferred to a training facility in the Iota Eridani system. The facility, used to train new pilots, was located on a rocky moon perfect for close quarters flight maneuvers. Training proceeded well until the second week when the most promising trainee in the class went berserk and turned his fighter against his classmates. Valin and his squadmates tried to reason with the rogue trainee but after two of their comrades had been shot down they were forced to disable the Renao's fighter. Unfortunately, as the fighter began to disintegrate it impacted into the Command Center of the facility killing several officers and effectively disabled the facility.

A distress call was promptly issued to Starfleet Astronautical Command and the USS Oneida was dispatched on a rescue mission to secure the remaining personnel at the facility. With life support hours away from failure, the USS Oneida arrived in time to rescue the survivors including Valin. The young Ardanan had sustained several injuries during the dogfight and spent many days in the Oneida´s sickbay before making a slow but steady recovery.

Eventually, Admiral Anderson contacted the Oneida and was able to convince the captain that the crew of the Theurgy was telling the truth about Starfleet Command being overtaken by a parasitic infection. When the Oneida rendezvoused with the USS Theurgy, Valin volunteered to transfer off the Iroquois-class starship and begin his career on the Theurgy. 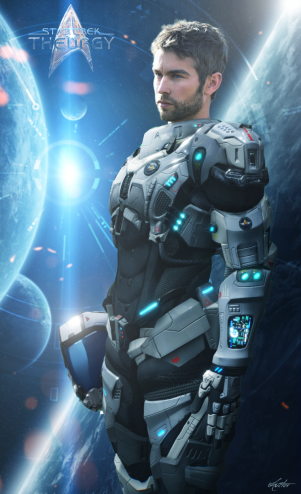 Valin was a relatively well-spoken Ardanan who carried himself with an air of self-confidence that was typical of city-dwellers from his planet. He was ambitious with an eye towards his future either in Starfleet or on the governing council of his homeworld and did not appreciate barriers to his advancement. When speaking with others he was usually diplomatic though could be quick to anger when, in his own mind, he was unjustly challenged or questioned. If he knew an outburst would reflect poorly upon himself, he would retreat to his quarters to seethe and ruminate or seek distraction. Earth opera, which he had gained an appreciation for while at Starfleet Academy, and piano were his primary creative outlets and stress relievers. Others included reading and working out--activities which allowed his mind to rest.

Though somewhat prideful, he was aware of his own limitations and did not boast of achievements he did not believe to be deserved. If an accomplishment was the result of a cooperative or shared endeavor he would not hesitate to highlight the contributions of those who worked with him. However, he was also hypercritical of both himself and colleagues often holding them to high standards. If a colleague's actions were lacking in his eyes or unnecessarily threatened lives, he would not hesitate to call them out on it or even report them. These qualities endeared him to some and soured him to others.

Valin was a strict adherent of rules and protocols believing them to be necessary for the safety of his crewmates as well as for an orderly society. He felt comfortable in the hierarchical structure of Starfleet with its clear chains of command and abhorred what he might consider rebellious actions. He greatly valued order and duty, holdfasts from his early education and life on Ardana. However, this strict adherence to rules sometimes made him stubborn and intransigent on matters and could cloud his mind to more creative solutions to problems he faced.

When it came to relationships, Valin was a believer in quality over quantity and was typically very guarded in his personal interactions. While cordial enough to his colleagues, he purposefully kept most of his relationships at the level of acquaintance. It was only with those that he grew close to and trusted that he would allow to know his more intimate thoughts, doubts, and weaknesses. This was both a defense mechanism and a practical action as he believed effort should be placed into meaningful relationships which he found difficult to do when someone was 'friends with everyone'.

Callax was an average height Ardanan at 6'0" who maintained a lean physique through habitual and frequent physical training. In posture he carried himself with a dignified and confident air and had a pearly white smile that was his primary disarming mechanism when faced with conflict. His body was free from most blemishes save for a scar down his left thigh, the unfortunate result of a flying accident early in his youth.