Zaraq, formerly of House Bah'el was a Security Officer who served aboard the USS Harbinger before transferring to the Theurgy in 2381. Zaraq was killed by Ian Hawthorne during the Battle of Starbase 84. Before his death, Zaraq aided in the opposition against the parasites that compromised Starfleet Command in the end of the 24th century.

Born to a Klingon prestigious military commander of the House Bah'el, Zaraq was exposed to the arts of warfare at a very young age. He had talents in both tactics and on the field by the time he was twelve, leading a small unit of men into numerous operations and bringing glory to his House.

His glory, however, earned him many enemies within his own Clan, threatening the position held by one of his father's rivals; Batahr. Forced into a corner by the child's rising fame six years later, and using the strife of the Dominion War as a part of his plan, Batahr issued a mission to Zaraq and his companions. Unbeknownst to the boy, his team had been sworn by honour to their Houses to rightfully serve Batahr. Believing that he was eliminating a small rebel force that allegedly was opposing the wartime orders of the Klingon Empire, Zaraq was suddenly ambushed by a group of Changelings. For not only had Batahr meant to claim the glory of killing the Changelings that had been espied before the mission, but he also meant to get rid of Zaraq in the process. Attacked from both sides, Zaraq was unable to tell friend from foe, as he sensed that they'd all have the intentions of killing him.

Yet he managed to survive, but barely. The Changelings had shifted form and vanished in the strife. Badly wounded, he fled and requested for back up. Batahr, furious that he had been denied the glory of killing the Changelings and surprised to learn of Zaraq's escape, launched an attack, alerting all Klingon that a Changeling had disguised itself as Zaraq. No matter how much he'd denied it, none believed Zaraq when he claimed to be no vile Changeling, not even his own father who'd seen the twisted corpse of his son's crew mingled together with the bodies of other Klingons. It was later reasoned that one of the Changelings had taken on Zaraq's form among the corpses.

Instinctively, Zaraq entered Federation space. Over the communication link, not only did Zaraq warn the Captain of the Federation starship that awaited Zaraq about the Klingon Fleet behind him, he'd also aided them in convincing the Klingon pursuers that their tactical decision to tear down the brittle standing the Klingon Empire held with the Federation at the time was inadvisable. Moreover, the Chief Medical Officer aboard the starship provided evidence that Zaraq was - in fact - Klingon and not a Changeling. Yet even though the Klingons withdrew their pursuing fleet, Batahr would still seed doubt that Zaraq had managed to fool the Federation, claiming that he knew that Zaraq was dead even if the body had vanished - the Changeling gone.

Impressed by his calm attitude under the pressure of battle in such a critical state, the Captain handed Zaraq a letter of commendation once he'd fully recovered. Without a place to call home, Zaraq had no choice but to accept. And in his many years of service, he'd hopped from one vessel to another until he came to serve on the USS Harbinger. However, despite his qualifications, Zaraq merely sought the position as Master-at-Arms, instilling discipline into the crew and attending the Armoury. He remained a irritable Klingon removed from his Clan and home, and 'waited' for something more. Something that would give him purpose again so that he could make a difference.

The second blow to his honour came when he was branded a traitor again by the Federation that had once saved him. He fought alongside his crew to survive the pursuit of the fleet across the Alpha Quadrant. He lost friends and faith. A great ire awakened in him, and yet he maintained control of himself. At the point where the USS Harbinger and the USS Theurgy set down on Theta Eridani IV, both ships had lost a lot of personnel, and Zaraq was transfered to the Theurgy in order to become the Theurgy-class ship's new Master-at-Arms.

In shame of the atrocious acts he committed under the influence of T'Rena's mind-meld, Zaraq later resigned from his position as MoA, instead serving as a regular security officer on the Theurgy. 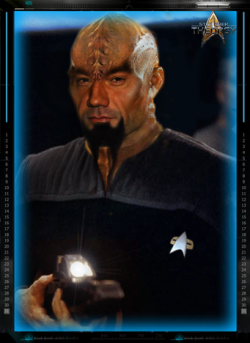 Being a victim of treachery once, Zaraq has became wary in trusting those around him. He prefer keeping himself at a distant (indirectly insulting the company he's in according to the Klingon culture), quietly observing the situations, analysing and paying close attention to the behaviours of those around him. Nonetheless, despite being a paranoid and hiding the boiling anger inside him, Zaraq will voice his own opinion or step forward with a given task where he sees he should. Masked mostly with a serious expression and armed with a formidable reputation, the Klingon give off an unapproachable demeanour - especially to those faint of heart.

When speaking, his clear words may seemed arrogant at times and his actions may appear somewhat brutish, but for Zaraq, it's all for a good cause. Like most Klingon, he will be offended if he catch somebody whispering in his presence, taking it as an insult. If they were to struck him with the back of their hands in jest, he'll acknowledge it as a challenge to the death. Same goes to any female that would throw things at him, which is the Klingon way of choosing a mate, where he might not hesitate in claiming them - hard and ruthlessly - even if he would not care for permanent companionship.

Of late, in the strife against Starfleet and loosing his belogning to the Federation, Zaraq has become prone to seek diversion from the teeming vitriol he feels for his betrayed honour and loss of House and Clan. He finds recourse in battle and sexual exploits, caring for little else even if he performs his duties. The brittleness of his mind is yet to be detected, yet he is bound to throw away all pretence of Starfleet doctrine at little provocation. 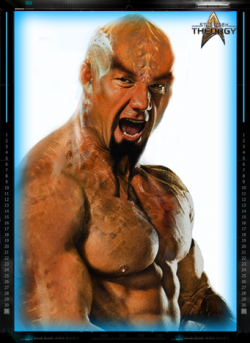 The most distinguishing feature of Zaraq's appearance is how he has shaved his head in shame for loosing his House and Clan.

Like any other Klingon, Zaraq share the same distinctive feature on his forehead; the exoskeleton tricipital lobe that encased over his cranium. He also has ridges on his spine, chests, feet and even on his "corpus cavernosum" although their functions is not really known other than to arouse their counterparts to great heights during sexual intercourse.

Internally, he also share their anatomy, possessing multiple redundancy in his organs. With twenty-three ribs, two livers, an eight-chambered heart, three lungs and even multiple stomachs. Thus with all the extra organs, Zaraq weigh a lot more than he look, almost reaching to two hundred kilograms in total.