William "Bill" Regal was Lounge Proprietor in Below Decks on the USS Theurgy before he was killed in action. Before his death, Regal aided in the opposition against the parasites that compromised Starfleet Command in the end of the 24th century.

William was the result of an illicit and illegal love affair between a guard and an inmate at the New Zealand Penal Settlement. His mother, Kylie Feldman, was a notorious con artist and scammer, who had spent years running variations on the same basic con throughout Federation space. The exact details of the con are classified, but it involved a shipment of Romulan Ale, a broken ship, and her wearing little if any clothing. She was eventually caught when she lost track of her former targets and tried running it a second time with the same person. The minor clerk this time around called security, and she was arrested and tried for the dozen or so times Starfleet could prove she had done the scam.

While serving her 12 years in New Zealand, she 'fell in love' with a guard, one Steven Holly. Later she confided that it was just an attempt to get favored treatment, but this may not be true as she was saying this to a fellow inmate, a plant in the settlement. Regardless of what she did or did not feel, the relationship was long term, as he gave her preferential treatment, and she gave him sex. But then she became pregnant. She was listed as not being allowed to mix with male prisoners, and thus her being pregnant would result in an investigation, Steven arranged for her to deal with the baby. But she did not take the medication, claiming to him it did not work, blackmailing him. He eventually broke her out, and hid her with his cousin who lived on a nearby farm, near the Settlement. Thanks to her own contacts, a woman matching her description was seen leaving the planet that afternoon, and thus the Federation began to look for her off world, while she lived in the stable for several months.

Eventually she went into labor, but could not get to a doctor in time, and was forced to give birth on the side of the road. Just as the baby was delivered, a passing truck slowed down, and the guards inside recognised her and arrested her,leaving Steven's cousin with the baby, unaware it was hers.

With little choice, Andrew Regal and his wife raised the child themselves. But he was a handful, having inherited his mother's smooth tongue and attitude to work and authority. At 14 he left home, and began to explore the galaxy, at first as a ship hand but soon upgrading, thanks to his skills at the card table, to his own ship and smuggling, transport and anything else that paid well.

He managed to avoid the authorities for at least a decade, always sticking to the outskirts of civilisations, in his various ships, Kylie 1 through 25. But eventually, he got an offer from the Orion Syndicate that was too good to pass up. He was taking a ship full of Orion Slave Girls to another transport just outside the Sol System when the Theurgy found him and brought him on board for questioning and arrest. The slave girls then stole his ship, leaving with it (and actually heading to and making the contact), the Theurgy not following due to their heading to San Fransisco for their R&R.

He was in the brig, awaiting transfer to the local authorites, but the local authorites had issues with the paperwork, something about not having the right forms filled out since the ship was stolen or some such. It had taken a while, but he was about to be handed over when the Theurgy was ordered to stand down, then opened fire upon. William was tossed back in the brig while the crew focused on surviving. It wasn't until they were safely hidden that William's fate was decided. There was a suggestion to just let him go, but it was deemed to be a security risk and, besides, he didn't want to go, as the fleet wide bulletin about the Theurgy going rogue mentioned him as their co-conspirator, a known criminal. So it was in his best interests to stay on board and help them.

He managed to convince Captain Jien Ives that his contacts and sources in the underworld and various other organisations would be helpful, and indeed so far it has been, as several vital parts and resources have only been obtained due to his contacts. The captain has only accepted this arrangement after telling William that every illegal act and person engaged in them is being kept track of and will be arrested after the ship is once again back in Starfleet, which William could hardly refuse, although he's still hoping he'll get time off due to his help. Officially, he has become the bartender in 'Below Decks', the equivalent of Ten-Forward in Galaxy class starships, but so called because it is in the bowels of the ship, near the very center of the vessel, at the point furthest away from the action, 'Bill' claims. He has taken some liberties with the room, changing the decor slightly, and adapting one of the holo-emitters to display 'Felicity', a representative of Felicitas, the Roman goddess of good luck and success. She constantly travels about the room, serving as a mix of waitress, entertainment and tease, after the captain put their foot down and William was forced to put clothes on her. She has a bright, air-headed personality, a total classic 'blonde bimbo', albeit one with a greek accent and who knows she's a goddess. 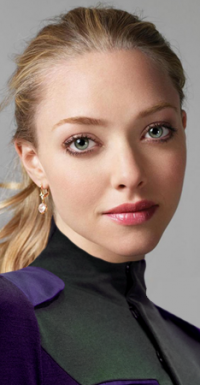 Image: The Felicity hologram
William is a very smooth talker, glib and personable, although his eyes are always slightly closed as he is constantly thinking, constantly planning. He always looks for the best option, the most rewarding path for the least amount of work. Rules and regulations to him are mere obstacles, as are locked doors, relationships, anything between him and his end goal (which is almost always him on a big pile of gold-pressed latinum with a half dozen near-naked women). He doesn't handle direct conflict well, thinking of himself as wise as opposed to being an abject coward which is closer to the truth. He's also not good with real, honest emotion, always holding back, always having a wall up between himself and the outside world, which a trained psychologist would have a field day with, if he ever let up and allowed himself to be analysed...

Regal's body is surprisingly fit (his father was a very fit man), despite his rarely working out. He has a few scars here and there, none major. He has three tattoos, one on his left forearm, a Klingon prisoner identification number, one on his neck, a Romulan prisoner identification mark, and an Orion Syndicate symbol just up and to the left of his groin that he will not discuss.