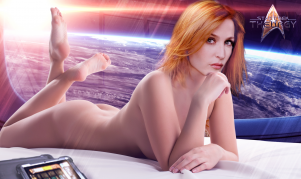 Before her permanent deactivation, EVE Program AK-1 Diagnostic and Medical Subroutine Alpha-656 was the LMH (Long-term Medical Holographic program) on the USS Theurgy. Eve aided in the opposition against the parasites that compromised Starfleet Command in the end of the 24th century before the Savi compromised her program, and she was left deactivated because of the critical flaws apparent in her runtime.

In 2373, Doctor Lewis Zimmerman received a request from Starfleet to enhance the lifespan of the EMH as the current EMH Mk I could only operate over short periods and only as a supplement for current medical staff. Zimmerman, seeing the success of the EMH, immediately began work on a Long-term Medical Holographic program (LMH), and chose one Doctor Julian Bashir as the test bed for the prototype. The project was partially scrapped and nearly completely derailed that year when Bashir was revealed to be genetically engineered.

The project continued to remain on the back burner as Zimmerman became more focused on correcting some perceived flaws in the EMH Mk I by redesigning it as the Mk II.

In 2378, with the help of Voyager's EMH Mk I, Zimmerman was able to complete the LMH Mk I. He chose to use the image and personality of Doctor Taldina Frost of Starfleet Medical, due in part because Zimmerman was dating her at the time. Taldina, as described in his notes on the LMH, had the perfect bed side personality. Always trying to find something that would cheer up her patients. Sadly when one tries to program personality into a computer program rather than let it develop naturally, problems arise. Those who knew Taldina and encountered the LMH always said that it's personality seemed, off. At times it was too bubbly like an overdose of sugar. And other times it was too subdued and seemed forced and uncaring. This was mostly the issue Zimmerman was encountering with the EMH Mk I and II. So he stripped it down to only the most basic of the personality and since it was meant for long term it could develop naturally from there each time the program was used. This would give the added benefit that those who had to work around it could mould the personality to something that works for them.

The artificial intelligence matrix was another beast entirely, one that seemed to refuse to cooperate. Without a full fledged personality matrix, the program seemed to always wind up confused in itself. Most of the A.I. matrices that were known at the time kept making code call backs to aspects of the personality that just didn't exist in the current rendition of the LMH. And at least once the entire program imploded due to the conflicts. Zimmerman however found the answer in Voyager's EMH Mk I's code where his program had adapted to a different personality formed over time, and making different call-backs to the new code. So with his permission, Zimmerman incorporated a bit of that code into the LMH to allow it to alter it's own code when what it's looking for doesn't exist.

This however created an infant. A child that was still trying to figure itself out. This resulted in a seven month continuous test in which the program ran nonstop and was interacted with by the entire medical staff of Jupiter Station, as well as any engineers that Zimmerman could wrangle into the project. This allowed the program to develop in a some-what natural way as well as test it's ability to remain online for extended periods. By the end of the test, many of the medical staff reported that the LMH was, while lacking any sort of medical training, was a welcome addition to the medical systems. Quick ability to learn, and even assisted the doctors from time to time with non life threatening medical procedures as an assistant. It's child like nature in the beginning even being an aid in the children's ward. The engineers who worked with the LMH reported a 0.009% degradation of the program over the seven month trial. Something that was easily solved by installing additional data buffers. Furthermore, the LMH's development made it no longer a child, but held a maturity on par with a young human woman.

After testing was complete all that remained was to add the EMH Mk II's medical database and create pathways so that the program can access and understand the material. After which the LMH was presented to Starfleet Medical to fulfill their request for a long-term program that was capable of operating in environments that flesh and blood doctors were incapable of functioning in. The LMH was then installed on long-range exploration vessels as a long term supplement to the medical staff in times when a quarantine must be initiated due to possible viral infections or other possible medical disasters since the hologram is incapable of contracting any of which might be brought aboard. One such ship was the USS Theurgy.

After that, the LMH Eve had primarily been used in an normal medical manner. An extra set of hands if all the current ones were tied up. During the outbreak of a strange parasitic virus aboard the ship, Eve served as a backup quarantine doctor since she was unable to contract whatever it was that was spreading. But unfortunately, she was of little more help than a normal doctor as her database did not contain any information on such an infection. This made her feel, in short, useless. It wasn't until much later after the arrival of the USS Relativity and their aid that she acquired the knowledge to stop the infection.

She felt even more useless when an apparent god-like being invaded the ship and started causing her biological coworkers to start acting in strange ways. Her medical programming contained everything about biological sexual interaction, however she could not understand the reason behind the elevated activities. She was supposed to be the most sophisticated medical program ever designed by human hands, and twice now something had happened on board the ship that she could neither comprehend nor solve.

Once an A.I. controlled ship attacked the Theurgy, Eve - in a fit of panic - shut herself down. Her entire program was taken offline and her activation sequence time encrypted. The equivalent of cowering in the data processor. It wasn't until after the Battle of Starbase 84 had passed that her program was able to be reactivated. When questioned, she simply replied that she had been scared. Though any first year psychologist would have been able to tell there was something else going on with her. But still, her only response to the incident was that she was scared, and then she would change the subject.

After a complete level one diagnostic of her program, she returned to her duties of aiding the current medical staff aboard ship. No errors were found in her program, though it was found that due to her extended time online, her program had grown in unexpected ways. Before her program was in many ways similar to the EMH Mk I and II, now her program almost appeared like a spider's web. Branching out, connecting to itself and wrapping around. However, the diagnostic showed that her program was completely stable, capable of running for even longer times than she was currently used for.

Happy, excited. Always described as having a smile. Always seemed to find the bright side of things. Her interactions with the Mk I and II had been cordial. Though there was a very slight undertone that she thinks she was better than them. She worked with them only when required, and if left to her own devices, would actually prefer to not have to call them at all. Her attitude with the rest of the crew was generally accommodating. She would joke with them to try and elicit a smile in situations where they were down.

She was designed to be a replica in image to Doctor Taldina Frost. Described as being "little brown mouse" librarian attractive. She appeared to be in her late 20's, early 30's. The holographic fields that make up her physical body had been attenuated so that any difference between the LMH and Taldina would be indistinguishable by sight or touch. She was capable of wearing normal clothes, but the nature of her program didn't warrant such as her holographic uniform was far more sterile than any normal clothes could ever be.