Rennan Cooper was Chief Tactical Officer aboard the USS Theurgy before he was killed in action in 2381. He was one of the chief designers for the Valkyrie warp capable space fighter. He Before his death, Rennan Cooper aided in the opposition against the parasites that compromised Starfleet Command in the end of the 24th century.

As a young child, Rennan Cooper had quite an explosive temper. Friends came scarcely and stayed around even more rarely because of his random fits of violent rage. Though this concerned his father, his far more liberal mother said that it was perfectly normal, and that these natural emotions simply needed a better outlet. At the age of eight, Rennan was enrolled in an Aikido class. As he progressed through the levels and stages of the martial art, his outbursts became less violent and easier to control. At the age of twenty, he received his black belt and after a long struggle with his own emotions, he had finally learned how to channel his emotions constructively.

At the age of twenty, Rennan decided that it was time to strike out on his own, start trying to make a name for himself, instead of try to ride on his father's coattails. His father was a renowned quantum particle physicist for Starfleet, who had contributed many advances to weapons and propulsion technology in his lifetime. Before enrolling in Starfleet Academy, Rennan changed his last name from Emmerich, his father's name; to Cooper, his mother's maiden name. If he was going to make it in Starfleet, he wanted it to be on his own merit, not memories of his father's greatness.

From a very early point, Rennan showed a great interest in and aptitude for weaponry. He loved how the technology worked, how it had advanced through the years, how it could be improved, how it could be implemented. As he studied, his instructors found his fixation on weaponry to be a bit disturbing; violent, some said. His grades were exemplary and there were no complaints of physical violence throughout his stay at the Academy. During his second year at the Academy, upon review of his record and his interest in weaponry, Rennan was contacted with an offer to enter a special course of study. This new program would focus on specifically grooming him to work with Starfleet R&D, developing and upgrading weaponry. He jumped at the chance, ecstatic that he would finally have a chance to do what he wanted to.

Flight of the Valkyrie 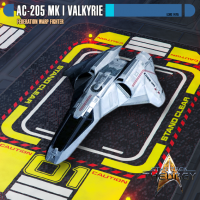 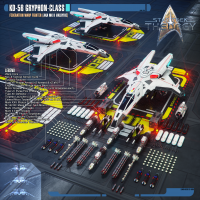 AC-307 Mk II Valkyrie
Rennan graduated from Starfleet Academy without undue difficulty, and with highest honours. He walked away with the rank of Lieutenant, Junior Grade. He was immediately stationed in the Martial Science department of Starfleet R&D, placed on the crew tasked with designing the next generation fighter craft. Project Valkyrie was born. After months of work, the AC-205 Mk I was ready. Everyone was happy, except for Rennan. His superiors tried to convince him that its armament was sufficient, and that any extra armament would need extra hull reinforcement to prevent a threat to structural integrity. He tried to convince them that they were wrong. His temper began to lick at the back of his mind.

As the first class of the Mk. I rolled out to be tested by XCS-311, Rennan was sorely disappointed, and more than a little angry with his compatriots for releasing such a "sub-par product". A "shiny coffin with wings". His vision was a fighter that did not need the support of a starship, but could be the support of a starship. Luckily for him, the heads of R&D saw the relative success of the Mk. I and ordered an upgrade program, thus the AC-307 Mk II was born. He was appointed the deputy director of the program, becoming the second-in-command for its' development, testing and construction. This was a craft much more to his liking, more heavily armed, a beefier power plant, along with some weaponry that he had tweaked to be more effective than the standard Starfleet issue. With the issue of the Mk. II, Rennan met someone whom he would have a chance to work with later on in life. Lieutenant, Junior Grade Miles Renard. A rather strange man, but Rennan liked him. He was a bit stoic and unemotional sometimes, which was commendable in a pilot. What Rennan loved about him was that he was never afraid to say what he was thinking, and never afraid to hear what you were thinking. He was the most vocal of the pilots, and had a lot of good feedback to give as to the performance, or misperformance of the Valkyrie Mk II. They never became overly close, however, Rennan considered Miles to be more than an acquaintance.

Fairly soon thereafter, it was time to polish his baby. Top men wanted the Mk III, and they wanted Rennan to spearhead the project. After seeing his commitment and genuine passion for the Mk II, they decided to see how well he would work out as a leader. 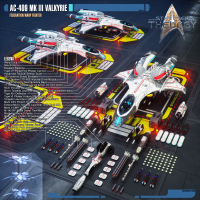 AC-409 Mk III Valkyrie
With the success of the Mk. I and the Mk. II, the heads of R&D decided that this project would have a much larger scope and scale, a more comprehensive development team compliment, and would be allocated all resources deemed necessary by Director Cooper. Extremely excited about this project, he threw himself into it heart-first. He would often stay up for days and days at a time, planning. Long after his colleagues quit, he would still be drafting away. Unbeknownst to anyone but his crew, he was responsible for approximately 65% of the Mk III. After a long period of upgrading, scrapping, rebuilding, tweaking and stretching this project to its' limits, they had the Crème de la Crème. The AC-409 Mk III Valkyrie prototype. Faster, stronger, more capable, and less dependent. After seeing the prototype, his superiors gave him a good bit of praise, even promising a promotion to Lieutenant. They noted in his file that he was an effective leader, and could possibly handle a command position someday. Against Rennan's warnings and protests, all sixteen of the Mk III prototypes were put aboard the USS Theurgy for testing. It was a horrible mistake to place all of your eggs in one basket, he insisted. Again, the chiefs of R&D wanted to hear nothing of it. This, again, began to reawaken Rennan's anger. With so much work to do, it was very scarce that he got to go into the holosuite and practice his Aikido.

After the Mk III was finished, he was stationed as the Acting Chief of Warp-Driven Weapons Development. It proved to be rather interesting, however mostly fruitless. Very little usable technology was derived from it, and the program was deemed a flop, with no negative connotation towards Lieutenant Cooper.

The rest of his projects were rather menial until one day, he got orders from Starfleet Command. He was to accompany the crew of the USS Harbringer during a pursuit of a rogue Starfleet vessel. Upon boarding the Harbinger, he was told that he was selected because of his unique knowledge of the ship's defensive and offensive capabilities. His heart dropped as his pupils constricted. "What ship?" he asked. "The USS Theurgy," he was told. Instantly, the veins in his neck began to bulge and he began to twitch. Shortly thereafter, he made a request to be restrained in the isolation bay of sickbay until he returned to normal.

After the Harbinger had caught up to the Theurgy, a fight ensued. Not between the Theurgy and Harbinger, but with a ship that appeared to be from the future. The USS Calamity. All seemed lost, as it was a highly advanced version of the Theurgy, with automated warp fighters. However, a group effort between unlikely allies began to chip the edges of the Calamity’s defenses. Soon enough, its shields were failing. Meanwhile, Rennan had been busy below decks, turning a shuttlecraft into a phaser relay/amplifier of sorts. When the time was right, the shuttle was launched and used to amplify the Harbinger 's phasers. The first attempt ended badly, destroying the shuttle bay and almost killing Rennan, but the second attempt worked, punching a hole in the Calamity. That was all that Rennan remembered, as he was rendered unconscious by an airborne tooling cabinet.

The overload of wounded in the Harbinger’s sickbay and his own stubborn insistence that he was fine resulted in Rennan's hidden injuries being untreated. He returned to duty and transferred to the Theurgy to replace Lieutenant T'Less as chief tactical officer where he died from a blood clot on the bridge, dying with “his boots on,” at his station, defending his ship from a second attack from the Calamity.

Generally a laid-back person, Rennan tended to take things 'just seriously enough' as he put it. His relaxed attitude concealed a mercurial, bipolar nature, for he concealed a violent temper that threatened to reveal itself and the most inopportune times. Practicing Aikido regularly was the only thing that prevented his frustrations from escalating into violent fits of psychotic rage. He fully respected the gravity of his job, and tried not to let his anger affect his work. However, this is hard when 'Starfleet will let anyone with a G--Damn pulse into the science program.' as he also likes to put it. He was extremely good to his friends, and extremely cold and callous towards his enemies.

Over the years of weapon development, he has become somewhat desensitized towards death. When he first began in R&D, he would have severe pangs of guilt for the lives that he was destroying. After speaking with one of his combat history instructors from Starfleet Academy about his problem, he got a package in the mail. It was a poster tube, and contained inside was a flesh coloured poster with red lettering.

Upon realizing what this was, he grinned. The composition of the human body. This greatly helped to alleviate his pain, as he realized that after all, it was only elements that he was destroying. Later in life, his guilt would begin to haunt him again, becoming almost debilitating.

Rennan stood five feet, eleven inches tall and weighed one hundred and seventy-five pounds. His body was lean with fairly defined muscles underneath his fairly pale skin. His body was free of scars and blemishes, the only non-uniform spot being between his shoulder blades. There, he had a tattoo of the Kanji for 'warrior' about 3 inches by 3 inches. When he wasn't in his Starfleet uniform, he prefered black clothing with a lot of pockets and/or decorative admonishments. The most common accessory he was seen with was his tool belt around his waist and a Starfleet Issue welding visor around his neck.

His tool belt contained several common spanners and keys, as well as lubricants and his tricorder.