Lieutenant Nick Chambers was a Asst. Chief Operations Officer on the USS Theurgy. Before then, he was on various Starfleet vessels helping to manage their systems and operations departments. He served during the Battle of Shinzon. Since the destruction on the Enterprise, he's bounced around a bit for a chance to renew himself. Since discovering the truth about Starfleet Command and the threat of the the Infested therein when he served on the USS Oneida, he was drafted to transfer aboard the renegade Theurgy. Since then, he has renewed his efforts in the opposition against the parasites that compromised Starfleet Command at the end of the 24th century. 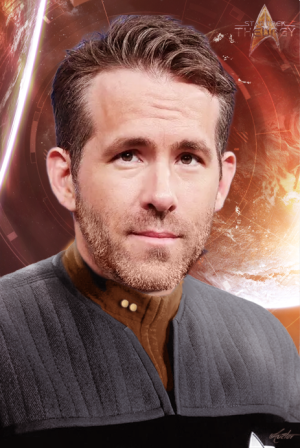 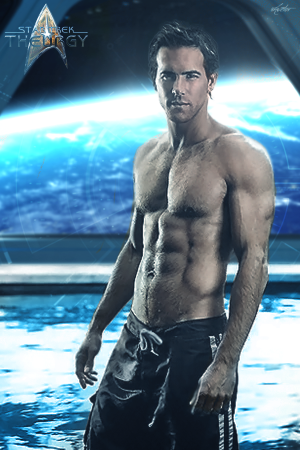 Nick was born in Hell, Michigan, on Earth. From a for the most part normal family atmosphere, Nick strived to do something better with his life. When his parents separated, it left him with a hole in his life. One he filled with order and chaos simultaneously. As he learned the art of sarcasm, he used it as a coping mechanism that served him well through school and his entry into Starfleet Academy. His meticulous OCD for organization however often clashed with his easy going outward personality, as he sought a sort of balance. Due to his personal issues, he often was at odds with other students and teachers in his schooling.

After he had completed his Starfleet training and graduated, Nick was tied to the life of an Operations officer. He liked the ins and outs of the duties it held. However he often still liked to be sarcastic and annoying to his colleagues usually allowing him the opportunity to do things his way and at his own pace. That changed however as he was assigned to the USS Enterprise-D.

Captain Picard didn't tolerate that and on more than one occasion had to slap him on the wrist. With the time spent there, he learned when was an opportune time to keep one's mouth shut and to just do his duty as requested. Giving him that father figure he lacked as a child.

Nick spent many years with the USS Enterprise-D and then the USS Enterprise-E until it too was destroyed beyond repair in the battle with Shinzon. Something that left the crew worse for wear with the various promotions, transfers, and deaths. With all the changes and loss of the camaraderie he grew to enjoy, he requested a transfer from the possibility of going to the next ship to bear the name and was assigned to the USS Oneida where he was promoted and eventually given a higher commission on the ship.

The Oneida Enters The Fray

After contact was made with Admiral Anderson, the Oneida crew verified their suspicions about the persecution of the Theurgy while on an assignment along the DMZ. At which point, Command abruptly ordered them to avoid an area of the border without reasoning, upon charges of treason. It was explained by Anderson that it had been the location of the Black Opal station and the site of an incident between the Theurgy and the Romulans.

Shortly thereafter, at the direction of Anderson, the Oneida arrived on the scene as the Sabine was being bombarded by Klingon vessels in the nick of time. Nick monitored the systems and resources while the battle with the Klingon warships continued on until they were destroyed, allowing the the Sabine and the two Valravn fighters to land in the shuttle bay of the Oneida for repairs. Knowing Chancellor Martok and Captain Ives from the Theurgy was aboard, it intrigued Lt. Chambers as to the situation they were dealing with.

It wasn't long before several Ker'Lah-class birds of prey appeared on sensors to stop them before they reached Qo'noS. After Chambers allocated resources for the repairs to the vessels, he heard that they'd launched the Sabine toward Qo’nos at much higher warp speeds than were typical. Immediately after the Sabine was gone, several of House Mo'Kai's Ker’Lah-class Bird of Prey’s arrived.

The Oneida was peppered with Klingon fire, despite the assistance from the fighter ships, but it wasn’t enough for the Klingon cruisers as they punctured multiple hull breaches in the Iroquois-class ship. Chambers continued helping the ship with forcefields and transferring power from the auxiliary systems to the shield grid as the emergency forcefield automation went offline. With the destruction of both the Km'Quwhat and the may 'Saj, there was a momentary lull in the battle as the remaining Klingon ships split their attention between the fighters and the Oneida.

After the battle the Oneida had sustained heavy damage to their nacelles from an EPS grid overload despite his best attempts to prevent the power from creating a feedback loop on itself. The loop caused the warp capabilities of the Oneida to still arrive over Qo'noS but only several moments after the Theurgy had arrived. As Captain Jackson sent personnel over for the extra fighter ships on the Theurgy, they had another problem to deal with.

He heard through the Fighter pilots that they had an insider on an incoming Romulan Warbird, whom carried intel that the Romulan ship was heading for Qo'noS to orbit over the First City, and that it carried a thalaron bomb akin to the one detonated in Paris. The thought of that angered Chambers but there was little he could do from his current post aside from keeping the ship's necessary functions online.

After the conflict, where the Romulan ship was destroyed, Nick was assigned to join the other incoming Starfleet officers aboard the USS Oneida to replenish the ranks of the lost officers on the Theurgy. He preferred to stay back from the action but he was overruled... on more than on occasion. He begrudgingly joined the crew despite his irritation, but he did sense that he was among good company. An outsider like them. It was here that he joined the crew in their fight against the infected.

Nick was bold with confidence and his easy going nature despite his internal struggle for order. He was very vocal in his efforts when a decision he didn't agree with would occur, and he knew of a better way. Sometimes that boldness went too far and his methods of acting out in impulsive ways would leave him in a particular social predicament. His sarcastic nature meant that it was sometimes difficult to take him seriously as even in the most dire of situations, he would exaggerate the situations at hand. Highly intelligent, calculating, and methodical at times, Nick also possessed a strong moral compass. This would create situations sometimes unwarranted with others but often necessary. Having the childhood he did, his coping methods often can rub his fellow officers wrong but his yearning for friendship and stability often are masked, hiding his true emotional state. Nick was generally approachable, and not afraid of having a good time when it was to come in his path.

Nick was at peak physical conditioning during his time as a Starfleet Officer, understanding its importance in regard to the possibilities of an away mission or endurance for longer shifts. He was more of a normal height for a male of his build, not being entirely too tall or too short. He had broad shoulders and a somewhat athletic build. Additionally, he enjoyed showing off his physical appearance which only amplified his bouts of humor. In a pinch he could move quickly with finesse due to his continued time in the gym.