Melissa Wright was a Weapons Maintenance Specialist aboard Starbase 84 in 2381 before she died on the day the USS Theurgy arrived to the base. She briefly aided the USS Resolve to escape the spacedock on the base, but she was killed by accident as she escaped the Resolve, meaning to desert from Starfleet and leave the base together with Sera vers Aldnoah.

It’s not a stretch to say that Melissa was born to work on starships; after all, she was literally born on board a ship. A mining craft, to be specific, working on the fringes of Federation territory, ferrying materials back and forth between mines and refineries for a moderate profit. Her parents couldn’t give her a terribly luxurious life, but they did their best to ensure that Melissa grew up with a loving family, a decent education, and learning practical skills for adulthood.

Everyone pitched into every role on board that ship, but most crewmen had at least one specialization. As she reached her teens, it became clear that Melissa’s would be maintaining the rickety old weapon systems that helped keep the ship safe Phasers that were long past their prime and disruptor cannons not fit for even the lowest of Klingon warships were her bread and butter, and by the time she was 18 years old, she had taken apart and reassembled more of the things than most people ever saw. By age 20 she was patching up and reselling battered old weapons for a small profit.

Around this age, her ship became involved in a minor incident when they ran across a shiny new Starfleet vessel that was held in peril. A malfunction with an old torpedo they had brought aboard was threatening to blow the ship to hell if it wasn’t disarmed, and transporting it wasn’t an option thanks to some lovely interference. The ancient weapon was so old that nobody in security or engineering knew how to disarm it - but Melissa had taken apart that same model of projectile easily a dozen times over.

Once aboard, the ease with which she disarmed the weapon was so remarkable that the captain offered her a Starfleet position right then and there. For a young girl who’d been used to living in grime and dirt her entire life, the prospect of just having a daily shower was enough to convince her to take it. She shuffled her way through basic training, adapting quickly to get a grip on modern phasers and photon torpedoes before getting shipped out to the first Starfleet installation that could use an expert in aging old weapons.

In the seven years since then, she’s done well in her job, not quite making the absolute best in Starfleet, but proving her worth constantly and making a decent climb through ranks. Structured and orderly life in a pseudo-military system still feels strange to her after years in a casual civilian environment, but she’s kept the amount of butting heads with superiors to a…. moderate number. As long as she has enough guns to maintain and the pip-boys aren’t being too self-righteous, she’s quite happy.

Her latest assignment after eight months of patching up old Miranda-class vessels at a shipyard over Andoria has been to Starbase 84. Here she splits her time between keeping the station’s armament in tip-top shape, and performing engineering inspections on both Starfleet and civilian vessels that pass through the starbase. Nothing all that glorious, but occasionally some interesting craft show up in her queue. In fact, on the day the Theurgy arrived at the station, her work orders included a check-up on a ship that had already spent some time impounded on the station - some old prototype Starfleet ship, now civvie-owned, named the Sabine. 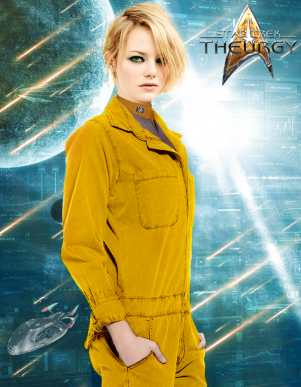 Melissa does her best to follow Larry’s Law, named for a crewmate on her home ship: don’t be a dick to others and they shouldn't be a dick to you. To that end, she keeps up a cheerful demeanor and tries to be at least friendly acquaintances with the people she works alongside. Still, not everyone is without their exceptions, and Melissa will not hesitate to go into full-on loudmouth jackass mode if she thinks she’s been wronged. She especially has an issue with superiors who have arrogant streaks; most of the black marks on her record come from shouting matches she started with the most stuck-up of her superior officers. Despite the friendly nature, diplomacy isn’t her strong suit - she’s nice to her friends and a complete ass to her enemies.

A bit imposing thanks to her height, Melissa has a seemingly slender look when in-uniform that masks the musculature hiding underneath. Her love of physical fitness is clearly displayed in some clearly defined biceps and leg muscles, as well as an almost-six-pack that helps compensate for her so-so chest. There are no scars on her body, though there is one poorly-drawn butterfly tattoo on the bottom of her left foot, a piece of body art she strongly regrets eight years after it was inked.