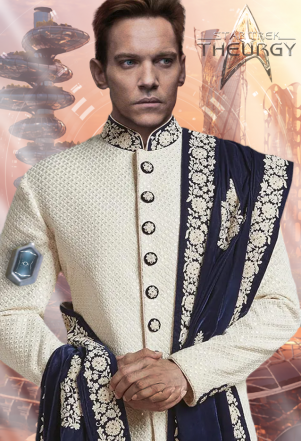 After having spent nine years on Aldean soil, the deep cover asset Jonathan Byrne had been made aware of the presence of the USS Theurgy. The rogue ship under repairs in the dry dock high above Aldea Prime. Having received a message from his old mentor Jona Rez after the battle of SB84, and already having access to the Aldea Prime shipyards, the time was perhaps ripe to investigate this Federation threat up close.

Born in 2343 in the Irish city of Galway, Jonathan Byrne was the son of Collin Byrne and his wife Laura Collins. He was the first born son and would have two more brothers and a sister in the years to come. Life was pretty average for Jonathan as he grew up in the Irish city, often going to the country side more inland to enjoy nature with his parents and siblings.

He had joined various sport clubs and youth clubs which made him a social kind of youngster. A confident one to say the least. However during one of the camps with one of the youth clubs a tragic incident lead to a dent in the usually charismatic and open minded boy. He became more isolated and calculated, dropping his youth club activities and focusing on sports. When he graduated from his school at the age of eighteen he directly got offered to enroll into Starfleet Academy after a college and job fair. The stars were a tempting goal to pursuit, especially in that time.

In the academy Jonathan received training which leaned closer to tactical, though he picked up quite a few extra classes from Engineering as well. This because his roommate at the time was following the Engineering line of courses. He excelled and thrived in the Academy life, yet never showed any interest in taking a leadership role. His aptitude tests showed he was formidable at completing tasks on his own, yet lacked the team spirit to cooperate. His engineering skills were crude though. He'd never really been down the grease and true engineering parts, though he learned on how to create proper schematics which engineers in turn could use to actually construct something. A few prototypes were investigated by Starfleet yet never put in production as further research was required.

In 2364 he graduated from his class and his first year he was stationed aboard the USS Khitomer as a tactical officer. That year proved to be uneventful, yet a good learning curve for his tactical skills. These, however, were tested in 2365 when the Khitomer was requested to aid in the attack on Station Salem-One. Jonathan was sent to the space station to help repel the attacking parties and restore order. His skills came in handy and he was taught some more tricks by the senior Tactical officers.

In 2366 his actions during the conflict and his skill set were noticed by intelligence officers who happened to be at the colony. One intelligence officer named Jona Rez showed particular interest and suggested the young man to be drafted into the Intelligence branch of Starfleet. From here on out the destiny of the Jonathan was changed forever.

Participating in various by-the-books operations for SI, Jonathan was also introduced in the world of covert operations. Working on a variety of missions like black market trading, hunting certain persons of interest and destabilizing certain area's outside Federation space. All of these operations were overseen by his direct handler Jona Rez. The Trill showed the human the ropes and taught many of his tricks and insight in the covert world of spying and more.

By the time of 2372 Jonathan had been specialized as a Starfleet asset as a deep cover operative. His last two missions were a success, he was now tasked to keep an eye on the Klingon empire from a newly found planet in their territory. The planet name was Aldea. A former intelligence officer had been removed from this planet in favor of a new task. Unbeknownst to Jonathan, this person would eventually turn out to have been Jien Ives. Jona Rez was still be his handler on this mission, yet he was not heard from again after 2372. Jonathan was provided with the tools and equipment to take the cover identity of a newly cloned gestalt on Aldea. Ever since, the man had been rising through the ranks of Aldean social structures whilst maintaining his cover as a sleeper agent. The focus of Jonathan was to see how well Aldea's industry boomed and how Klingon designs were applied to them over the time.

It wasn't until 2381 that Jonathan received an encrypted message from his old mentor Jona Rez. The message hidden in a simulcast sent by a ship called the USS Theurgy. After deciphering the code and unlocking the message, Jonathan was informed that Starfleet had been infested by a parasitic infestation. As it came from his own mentor, he felt obliged to follow it up. Though he was neither in the place or position to do anything about it.

A week later, an impossible chain of events led to a miracle that not even God himself could've played out. A ship that had been seriously damaged had docked for repairs. Having security clearance and access to the Aldea Prime Shipyards, it was easy enough for Jonathan to learn that this ship was in fact the USS Theurgy. He had slowly worked his way into the the ministry of Transportation aboard Aldea, with regular visits to the Aldean office complex. It was ironic that after all these years, he'd run into the ship that held his former mentor's symbiont. It gave him a chance, also, to investigate what the hidden message had described.

Jonathan grew up as a radiant person with joy for life and adventure. That all changed after the incident in his youth. After that the young man became somewhat more reserved, yet he had the trait to put on a mask and act as if everything was fine and great. He's a master at mimicking emotions which aren't how he's feeling himself and he can influence and manipulate with certain ease after years of covert operations.

Furthermore he didn't believe in family life, his job didn't exactly leave my room for it either. He knew his parents would worry about him being alone for so long and he had assured them in between operations that he was fine. It didn't seem to stop them though from trying to keep in touch and attempting to find him a suitable companion whenever he returned to friendly space.

Able to speak many dialects and languages, Jonathan however reveals his true accent when he feels he's around people he can thrust. He'll never speak true Irish as it's been far too long since he fluently spoke it. The product is a mix between Irish and an English accent.

Byrne was above average length wise, he wasn't overly muscular yet had a healthy amount of muscles to stand up in a close quarters hand to hand fight. With his interest in sword fighting he also made sure to be in a healthy condition in body and mind.

He had no noteworthy tattoos on his body. He did keep the scar on his right cheek. A reminder of a mistake he made in the past.