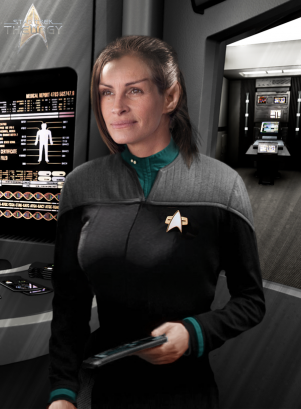 Before dying in the Battle of the Houses, Lieutenant T'Panu was the Chief Medical Officer aboard the USS Cayuga when it was attacked by the Borg in the Azure Nebula. As of March 2381, he served on the USS Theurgy, aiding in it's battles against a corrupted Starfleet Command in the late 24th century.

T'Panu was born in the year 2335, to Sharak, a Vulcan, and Ania, a Betazoid. T'Panu was named after the Vulcan word Panu, meaning "world". As T'Panu was the first born and conceived during Pon Farr, she was named accordingly as she became their world.

Growing up with Vulcan ideologies, T'Panu's father showed her as much love as they could (which was more than most Vulcan's were capable of showing). Her mother taught her how to love and how to express her feelings, whilst still keeping them hidden. Her father was revered in Vulcan society, as he took command on the Vulcan High Council. His most important role was preserving and protecting Vulcan History.

T'Panu was raised with a heightened sense of duty. She was raised always understanding how important her role in society was. T'Panu was meant to become a leader. This was demonstrated by how often she would be found at the Vulcan Learning Center from a very young age. She was fascinated by science, life systems and how each race worked.

She participated in the Kahs-wan at the age of seven, in the year 2342. This was her first real test, and her parents expected much of her. They warned her she should not attempt such a great trial at such a young age, but she was determined to be the youngest Vulcan to complete the trial. She had been preparing all her life, focusing on her meditation and fasting to prepare her for the ten days she would need to survive without food or water. She was not nervous as they transported her to the desert for her trial, as she knew exactly what was expected of her.

Due to her upbringing, she found it difficult at times to leave her injured classmates. She understood she was supposed to work alone, but her sense of duty was something she could not ignore. She helped all of her classmates finish the trial. Thanks to her, no one died; but because of this, she failed. T'Panu was forced to redo her trial the next year, when she luckily passed.

In the year 2354, T'Panu graduated from the Vulcan Learning Center, achieving the highest marks and distinction in her class, being awarded the IDIC for her hard work. She did not feel proud of her accomplishments, as she knew from a young age that she would rise up to the expectations her parents had for her.

Sharak and Ania had always anticipated T'Panu would join the Vulcan Expeditionary Group. These were not the wishes of T'Panu. She had always dreamt of Starfleet Academy and the opportunities they had to offer. T'Panu understood how important the Vulcan Science Academy was to her parents, but she was unable to put her emotions aside. T'Panu went against her parent's wishes and joined Starfleet Academy in the year 2355.

T'Panu didn't make many friends during her time at the Academy. Others found her to be closed off, with the exception of Deanna Troi. T'Panu and Deanna were both enrolled in Starfleet Academy in the same year, and found each other to have more similarities than with others. Troi helped T'Panu to open up, using her empathic abilities to help T'Panu understand and control her emotions better. Troi also helped T'Panu to understand others and sense when they were lying.

Graduating from Starfleet Academy with highest distinction in the year 2360, T'Panu had majored in medicine, with a minor in life systems. Despite T'Panu not going to the Vulcan Academy, her parents were still very proud of her. T'Panu then joined the USS Ahwahnee as a medical officer. She served on this ship until the end of 2367.

After that, T'Panu participated in many missions. Her most notable incident was the Battle of Wolf 359. There, the fleet took heavy damage, including the loss of 39 starships and over 11,000 casualties. She did everything she could to help as many people as possible, but she was unsuccessful with the heavy damage the fleet took. T'Panu's ship was rescued by the USS Enterprise-D, under acting Captain William T. Riker. T'Panu found it difficult to bury her emotions after the war and often struggled with them. While onboard the Enterprise, T'Panu received counseling from Deanna Troi, which helped her regain some of her emotional control.

T'Panu received the Starfleet Medal of Commendation for her exemplary work during Wolf 359. While T'Panu was happy to receive the award, she struggled with it as she felt she could have done more. She was reassigned to the USS Berlin in 2367 as a medical officer. T'Panu happily served on this ship, helping as she was needed. The Berlin, at the time, was patrolling the Romulan Neutral Zone, which - while not testing her resolve as an emergency physician - helped her become more adapt at the more minor aspects of being a doctor on deep space assignments.

In 2371, she was reassigned to the USS Harbinger as its Assistant Chief Medical Officer under Dr. McVaresh. On board the Harbinger, she clashed with Commander T'Rena, who was later appointed Executive Officer, because their ideologies regarding emotions weren't in sync with each other. During her time on the Harbinger, she had ample opportunity to use her skills, as the ship was involved in numerous engagements with both Romulan and Klingon vessels in the neutral zone. Sometime in 2376, T'Panu was stood up for a date, and subsequently made friends with the bartender despite not drinking.

In 2377, during the evacuation of a Federation colony by rogue Klingon ships attempting to destabilize relations with the Federation, Doctor T'Panu was responsible for treating the injured colonists as they were brought aboard the Harbinger, and was instrumental in saving the life of Lieutenant (junior grade) Cross, a security officer on the away team who had been severely wounded in a firefight while evacuating colonists. Due to the frequent clashes with Commander T'Rena, she requested a different posting.

In late 2377, T'Panu was transferred to the USS Cayuga as its Chief Medical Officer in time for the Cayuga's commissioning. She had felt pride being the first CMO on a brand new ship, and she had become familiar with the crew and felt that the Cayuga became her home.

Just when she thought she could forget about the Borg attack at Wolf 359 and move on, the Cayuga encountered a Borg inside the Azure Nebula. The Cayuga was heavily damaged and left adrift, in hope for a ship to pick up their distress call.

T'Panu was a half Vulcan, half Betazoid female. She was quite closed off with most people, hoping not to show her feelings that she tried so hard to hide.

Because of her Betazoid nature, she quite often found herself trying to understand people and why they did the things they did. She truly cared about everyone, wishing to help as many people as she could. She could often be found studying in the library, learning more about the way each species works, reading history books and getting ahead in school.

She usually came off as isolated and reserved. Most people did not know how to take her, but the few people she let in were lifelong, loyal friends. She simply cared about people so much that she tried to hide her emotions from people. That's the reason she went into medicine, she felt the highest calling for helping everyone, regardless of their background or species.

T'Panu was seen as the most loyal, caring friend to those she allowed herself to get to know better. With Troi's help, she was able to better express herself in a way that she wouldn't come off so closed off. Those who knew her, knew how special she was. They knew she was always there to lend a helping hand and an open mind.

Despite her many achievements, T'Panu did not wish to have praise. She felt she didn't need anything more than the gratitude of helping someone. She did not care about medals or trophies, just the knowledge that those in her care left feeling better. She felt that a job well done was everything she needed. T'Panu put the needs of everyone else before herself; this made her a fantastic ally, but also made her stubborn when it came to taking a much needed break.

T'Panu looked like a typical Vulcan. She had brown hair and brown eyes. She was of average height and weight, and carried herself with a sense of dignity and pride. Her hair was long and slightly curly, her hands skilled and exact.

Since the Borg attack at Wolf 359, she had a mysterious look in her eyes. Some found her quite charming, others found her dark, due to the things she had seen. She felt the same as she had always been; but now, she had a sense of hatred for the Borg whenever someone spoke their name. She was bruised from the attack, but had no lasting scars.