Lieutenant Asra Tek was a noted scientist in multiple fields before being joined with the Tek symbiont. After that, she joined Starfleet and served as a science officer and advisor for Starfleet Intelligence, thanks in part to the previous hosts service. Asra had been attempting to develop a new cloaking system, combining dispersion and subspace fields, at Starbase 234 when her project was scrapped, and she received new orders. Apparently, a ship recently encountered the Borg and a new unknown alien species so R Adm Anderson instructed her to defect to the USS Theurgy to aid in their opposition to the parasites that had compromised Starfleet Command in the end of the 24th century.

Born 17th August 2352 to Dr Sabal Nux and Gelur Bios. Soon after Asra's birth Gelur found that he couldn't bear to give up his life as a spacer to be routed on Trill and so left on a starship when Asra was only 7 months old. Sabal then found herself juggling raising a child as a single mother and serving as a professor of xenolinguistics at Trill Polytech. Dr Nux's genius solution was to foist large amounts of the early care onto a steadily rotating set of carers so that she could continue focussing on life at the university.

The day after Asra's 4th birthday Dr Nux decided that the now slightly grown Asra no longer needed the consistent care and mothering and so would send her to school and then see her afterwards provided that the university didn't need her to stay late. Any day where school wasn't running Asra went to the university with the doctor and was expected to be quiet and work at the back of the lecture hall. This large amount of forced studying time and her own intelligence is, Asra believes, why she managed to finish schooling so early.

As Asra transitioned into teenage years she began to chafe both at her mother's lack of attention and at the strict life style that she was pushed into, while Dr Nux had very little attention to spare a child she seemed to have infinitely more expectations and rules for a teenager who could be productive. This was part of the reason that Asra decided to study a science subject at the Trill Science Ministry, instead of going into xenolinguistics, while she was still not independent enough to leave the planet alone attending a different university in a completely different field still got her out of her mothers thumb as much as possible.

Asra had a very difficult time at the TSM, her young age made many of her peers look down on her while the relative isolation of her upbringing meant that she was inexperienced at making close friends, this time also made it much more obvious how many of her university age friends at Trill Polytech must have been humouring her as the daughter of their professor. This entire period meant that as soon as she was able, at 18, she applied as an initiate to the Symbiosis Commission, not only did the idea of an inbuilt friend appeal to her but also she saw both the joining and the training as an opportunity to improve upon the skills that she would normally have learnt as a child.

At 21 Asra finally managed to fully escape from her mother as she had always hoped. Heading off towards a whole new planet to further her studies and give her another chance at getting to know people was the opportunity of a lifetime, of course the fact that the Symbiosis Commission more strongly considered candidates that continued learning and possessed a range of experiences only sweetened the pot. Her time at the Daystrom institute was characterised by the experiences more often associated with university, she began to emerge from her shell and with a PHD already behind her it was impossible for her to be easily dismissed. 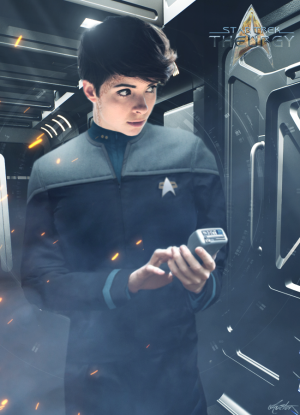 Having nearly completed her masters Asra's original plan was to continue with Warp Theory and add another doctorate to her cap however life had other plans. During the writing of her thesis she received an urgent call from her point of contact on the Symbiosis Commission, apparently a symbiont urgently needed a new host and given that she was one of the most promising candidates and was already on earth. She was to proceed to spacedock quickly as possible, what followed was one of the most whirlwind experiences of her life from getting a quick taxi ride from her residence to the institute and then being rushed through to the transporter pad on earth and then rushed of the pad at space dock with the doctor's beginning to prepare her for surgery even before they entered the medical centre.

While the entire operation, and a lot of the build up, was lost to Asra in a haze of adrenaline and painkillers waking up for the first time as something more than Asra Nux was very disconcerting suddenly she could recall experiences that had never happened to her and that certainly hadn't been there a few days ago. Asra spent the first day redefining her own life before she could begin trying to incorporate the Tek symbiont's other lives. The only advantages was that she was currently bed bound, and headed for Trill, for observation and the Institute had kindly extended her deadline to account for the exceptional circumstances. As she processed her memories it became immediately obvious why the joining had been such a rush, Regor Tek, the previous host, had been on a mission for Starfleet Intelligence when he was badly wounded, no medical aid could be called due to the nature of the mission and so Regor's partner had only just managed to get them both back to Starbase one in time for the symbiont to be saved. [1]

During her time back on trill during 2376 Asra had a slight issue, obviously her plan had been to continue her push into academia and research however suddenly she had 2 lifetimes of love for Starfleet added to her memories, not to mention the Symbiont's own opinions. Asra had always harboured a resentment towards spacers, and hence Starfleet, due to her father's abandonment but suddenly that resentment was challenged by memories of beauty, technical and scientific challengers like now others. Surprisingly it was her mother who came to the rescue here, experience from previous lifetimes pushing Asra to at least make an attempt to rebuild that bridge. Several long talks, and rants, about her father and space later Asra was ready to give Starfleet a try at least.

On receiving Asra's application Starfleet was put in a slightly difficult position, it was very rare that they received an application from someone who not only already had completed several courses of academic study but also could accurately recall 3 lifetimes of Starfleet experience. Fortunately the entire situation was quickly cleared up thanks to the intervention of Rear Admiral Anderson, given the previous host Starfleet intelligence was already keeping a very close eye on the now Asra Tek and the application was to good an opportunity to pass up. So Asra joined Starfleet Academy, settling in to a regular course of studies but at the same time she served as a technical advisor to Starfleet Intelligence on earth providing assistance with all sorts from recovered technology to starship design to subspace encryption.

Upon graduating, now decidedly well integrated into Starfleet, she applied to research the possibilities of quantum slipstream drives however her research proposal was quickly shut down for being completely infeasible. Despite evidence from the Delta Quadrant and repeated requests she has still been denied any resources to devote to QSD development. Despite this Asra was quickly promoted to Lieutenant and assigned to two different starbases, working on understanding artefacts and technologies observed by Voyager on her journey through the Delta Quadrant.

Asra’s first posting was to Starbase 343 to work on the development of transphasic torpedoes and an isokinetic cannon together with other scientists. Her work at the starbase continued for around a year before it was decided that development of both projects could be handed over to a different facility, the team’s work on the torpedoes was nearly complete, and thus not as interesting so Asra requested a transfer. The request was granted and she was moved to Starbase 234 to begin working on a new form of cloaking technology using a mixture of Alpha and Delta Quadrant Technology. This development was halted again by the admiralty of Starfleet, whom used the Treaty of Algeron as their argument for why the research had to cease. That might have been expected, but being the third time projects she'd been involved with was taken from her, it seemed an odd coincidence. It wasn't until much later she'd learn why, but she did notice how there was no word of the development of the torpedoes or the cannon being continued.

Upon receiving a new assignment from Rear Admiral Anderson, which shed light on the true situation with the USS Theurgy, it wasn’t difficult to organise a place on a small high speed passenger freighter carrying trade goods to Qo’nos. Running away from Starfleet had not been high on her intended plans and so she decided that just leaving would be the best option. Packing her things, she begged off sick before boarding her freighter and leaving the starbase, hoping that it might be a few days before anyone thought to check her quarters and report her as missing. The other reason for simply leaving was to make it easier. Attempting to explain to her friends about how Starfleet Command had been infested by bad brain slugs as opposed to good brain slugs would be difficult and left far too many methods of tracking her. That much she supposed Regor’s experiences were useful for, hence “ripping of the bandaid” and making her “defection” look realistic.

Just before she reached Qo'noS, she learned about Paris, and the fact that a new war had begun.

Asra appeared very scatterbrained to observers changing topics erratically, sometimes in the same stream of consciousness. She frequently left items lying around, one of the reasons that she mounted her pad to her right arm, the worst offenders were coffee cups around labs. Asra was very stubborn when given a problem and didn’t like giving it up either as a lost cause or to another's care, often keeping 4 or 5 old projects on her pad in case she was suddenly inspired.

Although originally very introverted she became more outgoing after joining with the Tek symbiont, although she remained quiet she found comfort in being quiet around others rather than alone. Asra prefered the truth over everything and was very reluctant to lie to people and so is bad at it. Her aversion to lying was fuelled partially by her belief that everyone is entitled to their own choices as well as a conscious decision to distance herself from the actions of the previous Tek host.

Obviously telling the truth is often not the best action especially when doing something that any one else may disapprove of so Asra frequently took the shortest route around it and lived by the statement "Better to ask forgiveness than permission". 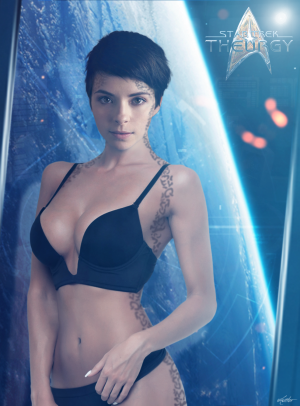 Asra’s lithe frame contained a fair amount of wiry muscle thanks to her interests but no considerable muscle mass. She bore dark brown Trill markings starting over her eyebrows then down over face, sides and hips before splitting into two thinner streams that extended down the sides of her legs. Her hair was kept relatively short and sat in a semi-tame nest a top of her head. She also possessed a helical stud piercing on her left ear. 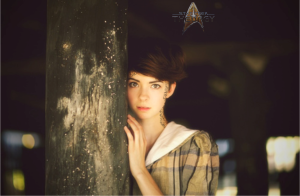