The Sabine was an old prototype initially designed by Starfleet for an intended new class of smaller shuttles. The design was eventually passed over in favour of other designs and the prototype was stripped down and dumped in a Starfleet boneyard, where it was eventually found and refitted and sold to Sera vers Aldnoah. She named it “Sabine”, but the name had no real meaning in her language having mainly chosen it due to how she liked of how it sounded.

At the beginning of 2381, Sera found herself stranded on Starbase 84 after a mishap involving the theft of an artefact from a primitive Class-M planet from the indigenous people. She was able to avoid incarceration by claiming that she was not aware that the planet was inhabited until she had been pursued by the native population. Starfleet returned the artefact but Sera was stuck as Starbase 84 until paperwork regarding the impounding of the Sabine had gone through the proper channels to get authorisation for the ship to be turned back over to her.

As the Sabine was impounded, Weapons Engineer Melissa Wright was tasked to re-purpose the old shuttle design to an experimental Starfleet gunship (See excerpt below).

Aside from the micro torpedo launchers mounted on the ventral side of the fuselage, the Sabine had three different directed energy weapons, being the gunship as it is.

Like the AC-409 Mk III Valkyrie's wing-mounted pulse phaser cannons, the first and only iteration of the heavy Rawley cannon was also wing-mounted, and it demanded that the warp drive plasma conduit ran through the primary phaser coupling. Unlike the Type U+, the Rawley cannon had a tendency to overheat at during prolonged engagements, instead made for quick strikes and a mandatory cool-down period between such strikes. The benefit was that its yield was higher than the Mk III's phaser cannons, at the lower firing rate of 3 bolts per second. The Rawley cannons did not have a beam firing option available, and they were mounted underneath the wings of the Sabine.

This weapon worked on the same principles as the Type U on the Defiant-class starships but at a much smaller scale as well as 20 % reduced output. It was an armament commonly found on the Federation's fleet of fighters and a number of auxiliary craft. The first iteration of the U+ could be seen on either side of the AC-307 Mk II Valkyrie fighter, but a second version was made to be wing-mounted on the AC-409 Mk III Valkyrie. It was the same technology in both versions of the U+ cannons, only on the Mk III, the entire weapon system was mounted on the wings instead of being inside the fuselage of the fighter (as it is in the Mk II).

On the Sabine, however, these were mounted underneath the nosecone, with a new swivel-function for ease of targeting. There were pulse or beam firing options available. Bolts had a firing rate of 5 per second. The beam setting had lower yield but longer range.

The second largest emitters used on small crafts such as runabouts, the Sabine's Type VI emitters were mounted on the aft of the wings as a means of countermeasures and rear defence.

When she’d been carted off from the Andorian shipyards way out to Starbase 84, Melissa Wright had expected her life to get quite dull, quite fast. No more patching up precious old vessels and giving new life to venerable ageing chassis; just a whole bunch of glorified inspection duties and maintenance on phaser arrays that weren’t going to be put to use for at least another five years. The work on this station had thus pleasantly surprised her a few weeks after reassignment when a project equal parts unexpected and exciting landed in her lap.

Thanks to her experience with refitting ancient ships for modern service, Mel had been assigned to strip out half the systems on an old shuttle that had been recently impounded and mount on brand new tactical components. The Sabine, as it was apparently christened by the former owner, had become an abandoned prototype for a fighter-like craft that was sold to a high bigger when the original project fell apart. Now that it had landed back in their hands, Starfleet had decided it wanted to reopen the old program and refit the chassis with entirely modern systems.

It had made for one hell of a challenge over the past weeks, but not an unwelcome one. Starfleet being as obstinate as it was, the higher-ups expecting her to take this ship apart and piece it together again had decided not to declassify the old production records and blueprints. The first week alone had mainly involved tinkering with the ageing vessel in order to sketch up schematics of it and figure out what parts were going where. That work had ultimately led her to the conclusion that little more beyond the hull itself was salvageable; quite frankly, with all the decay this ship had undergone, she didn’t know how it had ever stayed in one piece for this long.

Since then the work had proceeded relatively smoothly. It kept Melissa and a couple of occasional helpers busy all through the duty shift, but it was enjoyable work. Ripping out computer systems well past their prime and EPS conduits corroded beyond any safe usage held its own gratifications. New computers had been installed within a day, soon hooked up to a completely redone EPS grid, a new propulsion system that was about ready to be brought online, and her personal favourite, a tremendously expanded weapons array.

Starfleet had asked for a heavily-armed vessel - a gunboat, to be specific - and oh lordy had Mel delivered. Aside from a heavy phaser pulse cannon underneath each wing, she’d fitted another pair of smaller, anti-fighter cannons onto the front of the ship, right before two underside-mounted micro torpedo launcher. Two more conventional phaser arrays had been integrated on the aft of each wing, able to be hidden underneath a retractable sheath that she’d installed on a particularly insomnia-filled night. The shield systems were the heaviest that she’d been able to cram onto the vessel without having to rip out other systems to make room for the generator.

There had been a hiccup as the engineer had been forced to replace the EPS conduits a second time upon realizing the ones she’d installed couldn’t handle the power load coming from the new warp core, but that had been the only major impediment. Said warp core was the last major item to be installed, and the biggest thing to address on today’s agenda. It was already in place and simply needed to be fully powered on and diagnostics run before the ship could be declared space worthy. She’d already talked - alright, bribed with some genuine alcohol - some of the base’s piloting team in order to ensure she could fly her latest project on its first test drive. After all these long hours over the past weeks, the blonde couldn’t imagine letting it go out into the void without even once being at the helm.

Well, it was the second to last item. She fully intended to paint some fine-ass flame decals onto this thing’s hull when all the internal work was complete.

In the midst of hooking up some of the last antimatter injectors, she was distracted from her work by the sound of knuckles rapping against a bulkhead. Her head swiveled to find one of the senior engineers, Lieutenant O’Hanrahan, standing in the doorway to the small vessel’s engineering compartment. The expression of weariness on his face didn’t exactly fill her with optimism, but there was enough of that emotion already coursing through her veins to make up for his sour demeanor.

“About wrapped up with the repair job?” he asked in a dull tone.

“Just about, sir,” she replied with an excited nod. “Gotta get this core hooked up and give it a checkup, but this thing is gonna be ready to fly by tomorrow. Maybe even this afternoon.”

His own nod was decidedly less enthused. “Good. Once you have the Sabine ready, you’re to remove the additional weapons systems and hand over the ship to Security.”

The color vanished from her previously-rosy cheeks. “Sir? Can you run that by me one more time?” Remove… remove the weapons? The guns she had spent weeks bolting onto this thing? What? Who? How? Why in the hell?

“You heard me, Petty Officer. This vessel has been cleared from impound. Starfleet has decided to return it to its owner, Ms. vers Aldnoah, once your modifications are removed.”

You’ve gotta be shitting me. “Sir, permission to speak freely?”

“Denied. Do your job, Petty Officer, and report back when complete for your next assignment.”

With that he left as suddenly as he departed, leaving behind a blonde who was equal parts befuddled and infuriated. Just like that, all her work was for naught? Here she’d been following orders for weeks, doing everything she was supposed to and throwing herself into this project. And that was how her superiors showed appreciation for all that dedicated effort? A curt order to undo the most critical portions and hand this freshly-restored machine off to the idiot who’d kept it in awful condition? What, had the universe suddenly mistaken her for a toilet?!

Oh this was not going to go down this way. Not a chance in hell was she just going along with that. Growling in growing anger, she peeled away from the antimatter containers before her frustration could cause her to slam a fragile injector into the floor and blow up half the station. Fuck orders, she wasn’t just going to hand over weeks of hard labor to security officers who’d give it to an irresponsible owner without a second thought. At the absolute bare minimum, she was going to have a thorough talk this this ‘Aldnoah’ chick about proper care for a starship before letting her get another crack at the vessel. And possibly, she was going to knock the woman’s jaw off for letting the Sabine get into such poor condition in the first place.

The joy in her voice was gone as she spat out a vocal order to the air. “Computer, send a message to Ms. vers Aldnoah, telling her to get her ass up here, right now.”

[Request could not be completed,] the monotone voice responded, [Please restate.]

Fucking formal voice input software. “Send a message to Ms. vers Aldnoah,” she said again, fighting to keep her tone a bit more subdued, “Telling her to meet me in Bay 17-C as soon as humanly possible.”

[Acknowledged. Message has been sent.] 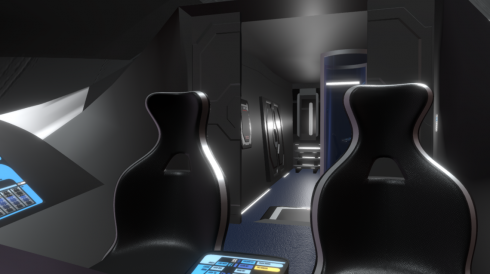