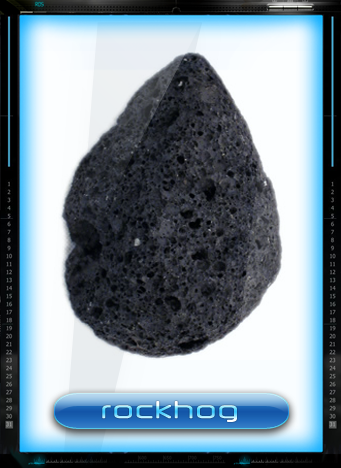 Paraechinus Pumicitis, also known by the common nickname of Rockhog, is a silicon based species native to the volcanic world of Almoctt III. They are notable for both their appearance similar to large chunks of black volcanic rock, and for typically being extremely loyal and loving pets.

Rockhogs are small, round shaped creatures, generally growing to between 15 and 35 centimeters in length and weighing 2-4 kilos. Their bodies are almost entirely covered in a black, chitinous material that provides effective camouflage in the dark, mountainous terrain of their homeworld. A narrow band of soft grey flesh is present along their stomachs, and is where their reproductive organs can be found. Four short, stubbly legs extend from the bottom of their bodies, and can be retracted fully in a similar manner to members Chelonii or Testudines orders.

Rockhog biology is perhaps most distinctive for their unique method of sustenance: rather than consuming organic material for nutrients, they are able to stimulate tissue regeneration and growth via an efficient biological form of radioelectric generation. The unusual process, unofficially referred to as ‘radiosynthesis’ by some biologists, has been the subject of more research than any other aspect of Paraechinus Pumicitis, as it has not been known to occur in any other living species. Given this dependence on having a source of radiation to feed off of, most breeds of rockhog will be unable to survive long outside of the irradiated areas on Almoctt III where they make their home. All rockhogs that are kept in domestication outside these areas belong to a single breed known as Digasumis that has developed the necessary organs to consume small quantities of an isotopes that releases life-sustaining radiation during the digestive process. Natural lining inside this digestive system prevents radiation from escaping the rockhog, allowing it to move freely about most environments without the danger that it will irradiate its surroundings.

Rather than a brain or centralized nervous system, Paraechinus Pumicitis has a series of decentralized nerve nets containing sensory and motor neurons, connected by cobwebs of intermediate neurons that function as both neural signal connectors and coordination centers. Because of the lack of nerve endings across the chitin covering most of their bodies, rockhogs have developed a form of sensory detection similar to echolocation that utilizes their sensitivity to radiation to detect the shape and relative distance of objects around them. Further detection of other lifeforms is achieved via limited empathic abilities; while not honed enough to directly read thoughts (which they would be unable to understand at any rate), this light form of telepathy allows rockhogs to sense both predators and friends much easier, as well as almost instantly gauge emotions and determine if another creature has hostile intent. Rockhogs do not possess any form of direct audio sensory ability, making them entirely deaf. Despite this, they are able to create high-pitched noises by vibrating their stomachs. The evolutionary purpose for this ability is unclear, and debate continues as to what practical use it has - though owners find it to be too adorable to question.

Reproduction is achieved through a method that does not cleanly fall under established categories. Males will lay eggs containing sperm that are ingested by females, who digest the shell surrounding the sperm so that it may fertilize their eggs. From this point on, the offspring develops inside its mother until they are born live, with no type of shell beyond a thin layer of brittle, mildly irradiated chitin that disintegrates within an hour of birth. Because they give live birth to their offspring and are able to regulate their internal temperature, Paraechinus Pumicitis is classified as a mammal; however, debate continues on whether or not it qualifies as a monotreme due to the involvement of eggs in the reproductive process.

Rockhogs are typically cautious when encountering a new lifeform, but once they have determined there is no hostile intent, they will become extremely friendly and welcoming. Their limited empathic abilities cause them to quickly become emotionally attached to both each other and other friendly creatures they encounter, a trait that has given them a reputation as incredibly loyal and attentive pets. They have increasingly become popular among races with telepathic abilities, such as Vulcans and Betazoids, who are able to form tight mental bonds with the creatures. Pleased or excited rockhogs are known to make cooing noises. These sounds are also emitted when they are being affectionately scratched or petted, leading to a mistaken belief that they have tactile senses along their chitin; in reality, they are simply responding to the increase in particular 'positive' emotions that such displays tend to induce in most species.

Paraechinus Pumicitis was first encountered in 2343 by the crew of the USS Gemini while they were performing geological surveys on Almoctt III. Following standard Starfleet procedure, the creatures were scanned and observed in their natural habitat for several weeks before several samples were transported to the ship for more detailed examination. Though the initially encountered breeds could not survive on a starship without constant immersion in radiation baths that proved extremely hazardous to the crew, further surveys several weeks later led to the discovery of a specific breed capable of consuming small amounts of irradiated material to sustain itself without posing a danger to the crew.

A group of 30 rockhogs were ultimately taken back to Deep Space 3 for further study, and within a year the exotic pet industry began building a niche market for the creatures. Thanks to Almoctt III's presence outside Federation space, unregulated poaching and collecting soon posed the danger of devastating the natural Paraechinus Pumicitis population, and in 2355 they were declared an endangered species, necessitating the intervention of several environmental groups to retrieve groups of rockhogs to be relocated to wildlife reserves within the Federation. This intervention occurred quickly enough that a large population was built within several decades, preventing the species from being threatened with extinction.

In 2380 Paraechinus Pumicitis was reclassified as no longer being endangered, and most restrictions on their ownership, barring safety concerns given their sustenance method, were lifted. Since this time they have become more and more popular as exotic pets, primarily on worlds with large telepathic populations.