Before dying on a mission to Andor, Nathaniel Isley was a fighter pilot aboard the USS Theurgy. After accidentally firing upon Skye Carver in the engagement at the Black Opal, Isley was demoted from Junior Lieutenant to Chief Petty Officer and transferred to Security. Once it was discovered that he was not responsible for Skye Carver's death, he returned to serve as a fighter pilot in the Lone Wolves Squadron. Not long after his return, he was abducted by the Savi, and underwent Correction upon the Versant. Afterwards, he was no longer a Romulan and Human hybrid, since the Savi removed all traces of Human genes. Isley aided in the opposition against the parasites that compromised Starfleet Command in the late 24th century.

Nathaniel Isley was born on Sennis IV, a colony located in the demilitarized zone which acted as a buffer between Federation and Cardassian space. His father, Ethan, was a Federation scientist working on the colony when he met a Vulcan woman named T'Mei. A relationship formed between the two, without Ethan ever discovering the truth about T'Mei; she was actually a Romulan, placed on the colony as a spy to watch over his work. She cut off her ties with her people after developing genuine feelings for Ethan, choosing to leave her Romulan past buried and continue her guise as a Vulcan.

When she became pregnant, her fears of discovery grew; the cosmetic changes to remove the obvious differences between Romulan and Vulcan would be discovered, destroying the life she had formed, as well as creating an incident between Romulus and the Federation. With little alternative, she called in favors to an old contact, who informed her husband of fabricated health problems with their unborn child, which required some genetic re-sequencing to repair. receiving his consent, portions of the fetus' DNA was altered, removing any noticeable differences between Vulcan and Romulan, and replacing them with Human.

When Nathaniel was born, he appeared perfectly human, but his physiology was closer to that of a Vulcan, affording him superior athletic ability as he grew. His mother, while continuing her guise as a Vulcan by following the teachings of logic, encouraged her son to follow a more human path, and be free with his emotions. It was the closest she could bring him to his Romulan heritage, which were deeply rooted in powerful emotion.

When he was sixteen, Sennis IV was ceded to the Cardassians, forcing the relocation of it's people. Those who had built their homes upon the soil of that planet would not be easily moved, however, and chose to fight to keep their land. This was met with force by Cardassians, who sought to occupy the planet, leading to war. The Federation could not provide assistance without triggering war with the Cardassian Union, leaving the colony without support.

Nathaniel lied about his age in order to join the fight, taking up arms with many other colonists in a losing battle. His most notable incident involved an attack on a Cardassian occupied facility, in which Nathaniel helped level a building. Unknown to him this battle was the turning point in the war as what had originally been pitched to him as a strategic military outpost was actually a medical facility being used to treat wounded Cardassians. From their the higher in command of the rebel forces used scorched land tactics which decimated the population on both fronts, and by the time the Cardassian investment in the colony was too costly both sides had seen a bloody conflict that left entire areas of the settlement unable to be used.

His parents resettled on a colony beyond the demilitarized zone while Nathan, unable to stay still any longer due to his disgust with the fighting he joined up with the crew of a cargo ship, and got his first taste of flying. He trained under the ships pilot to learn how to navigate and steer the ship, but found himself disenchanted with the primitive designs of their outdated models. He set his eyes to Federation runabouts, and the newly formed Tactical CONN department, which saw the increased need for skilled pilots in combat situations. Now with some hands-on experience, he applied to Starfleet Academy at the age of nineteen.

His time at the Academy was more difficult then he might have expected, with the rigid command structure being more then he could handle. He was a problem case for his instructor, all of whom said the same thing to him; none would recommend an insubordinate cadet like him for a posting. As a result, his four year program became a five year, making him twenty four before he received his first post, on the merit of his piloting skills more then as a result of an improved attitude. 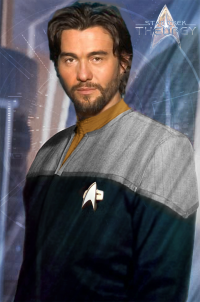 Image: Isley as a Security officer, after his demotion and transfer from Tactical CONN. As one of the Lone Wolves, he had the callsign "Maverick" before his demotion and transfer, but after returning to Tactical CONN, he assumed the callsign "Icarus". This was before he was made fully Romulan by the Savi.
His first commissioning was aboard the USS Emery, patrolling the Cardassian border. Skirmishes broke out on occasion, allowing Nathaniel to display his superb piloting skills, but he found himself butting heads with his CO more then once over the captain's use of politics over action. Nathan accused him of being a PADD pusher first and a captain second; his dislike of Cardassians over the incident with Sennis IV was attributed as the reason for his outbursts in most cases. Therefore, he earned his callsign Maverick on the USS Emery too.

As a result of these frequent clashes, the highest rank he was able to reach was Lieutenant Junior Grade by the age of twenty eight, and after having dealt with his attitude for four years, the captain put through a transfer, sending Isley to the Theurgy. It was expected that a CO such as Jien Ives would be better suited for Nathan; Jien was also the type to rush into action. He was intended to join the Lone Wolves; the squadron of fighter pilots aboard the Theurgy, under the designation of "Wolf Zero-Nine". His transfer was completed only shortly before the Theurgy was forced to flee Earth, and its crew branded outlaws.

After that, the number of pilots was reduced through loss of life, leaving only about three quarters of the sixteen pilots left. Outside the members of the Lone Wolves, Nathan hadn't taken the time to get to know anyone, and with a crew full of people freshly betrayed by their own people, he found himself in a tense situation to begin acclimating. He earned recognition for his efforts during the Niga Incident, which earned him and Ensign Skye Carver the Star Cross.

A couple of months passed where he served diligently, taking orders more readily from his new superior officers. Yet after accidentally firing upon Skye Carver in the engagement at the Black Opal, Isley was demoted from Junior Lieutenant to Chief Petty Officer and transferred to Security. During the investigation of Carver's death, DNA analysis finally revealed Nathaniel's true nature as a Romulan halfbreed, and that his mother T'Mei had lied to him about his heritage his whole life.

Once it was discovered that he was not responsible for Skye Carver's death, he returned to serve as a fighter pilot in the Lone Wolves Squadron. Yet not long after his return, he was abducted by the Savi, and underwent Correction upon the Versant. Afterwards, he was no longer a Romulan and Human hybrid, since the Savi removed all traces of Human genes. 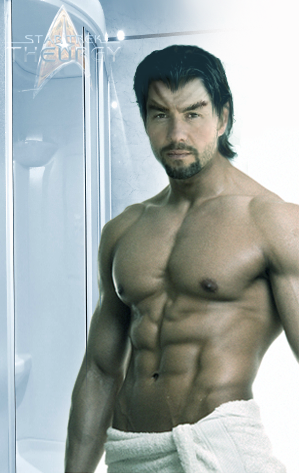 Nathaniel is notable for being ruled by emotions. While Vulcan crew members are better known for providing an objective, logical opinion, Nathan sees himself as the "anti-Vulcan", providing a more personal, passionate side to the argument. Despite this, he can be extremely focused when piloting, tuning out everything else and entering a form of combat high that provides him with a distraction-free state of mind. As a person, he can often be viewed as outgoing, with a sarcastic sense of humor and an openness to the company of women. As a follower, he questions authority that has not earned his respect, often acting as a devil's advocate to present the options or views that others don't wish to.

His time on Sennis IV had desensitized him to violence. His initial desire of wanting to fight at any cost had taught him exactly what most commanding officers were willing to pay in return for victory. The success of the Sennis IV campaign had left him with a desire to question and second guess orders which along with his sarcastic and often dry wit has forced him to come to head with many a commanding officer, and because of this he could be seen as having a chip on his shoulder. He joined Starfleet because he believed that they were organized, but at the same time more humane in their orders given. However he isn't afraid to cut red tape that would otherwise hinder him.

Nathaniel's Romulan genetics have afforded him a body which gives him three times the strength of a normal human being, while the resequenced DNA from his childhood leaves him looking like a human being on the outside. Like Romulans and Vulcans, however, he shares their copper-based blood, leaving his blood appearing green when oxidized, in addition to his organs falling in line with the textbook Romulan/Vulcan genome. To this day, he believes himself to be half Human and half Vulcan; he is unaware of his Romulan origins. He keeps physically fit through exercise, giving him a well built frame, which he further hones through the use of artificial gravity; he increases the gravity on empty decks by thirty percent when running laps around them.

In terms of his appearance, he often sports a full beard, shaving only when he looks to make a good impression with a woman who prefers it that way. His uniform is only worn to regulation when in the presence of a superior officer; otherwise, he prefers to leave the outer jacket opened for more comfort.