B'Nila Skai was a Counselor on the USS Resolve before she evacuated to the USS Theurgy during the Battle of Starbase 84. B'Nila aided in the opposition against the parasites that compromised Starfleet Command in the end of the 24th century.

B'Nila was born in the city of Cinavon on the great ridge of Feristin. Her father, Tha'Nis worked in the Geothermal Vents in the Electrical Power Station, and her mother, Ab'Pel, taught school in the local town center. From a young age B'Nila gazed up at the star filled sky and wondered about all the life out there. Living on a planet without a star, seeing the stars was always easy. She watched ships enter the thick atmosphere and leave again, the bright lights of their engines forcing her to shield her eyes until they had drifted much farther away.

At school she did well enough, learning both her native language and Federation Standard easily. She even learned Betazoid as the planet Betazed was in the same sector of space and many of the traders who came to the nearby spaceport spoke both Federation Standard and Betazoid. When she was old enough, she spent long hours in the replimat near the spaceport listening to the traders tell their stories. It was there she found her love of listening to people. She sometimes found herself talking to some poor spacer about a lost love and she helped him work through his pain. It was in those moments she knew what she wanted to do with her life.

At twenty years of age B'Nila submitted her application to the prestigious University of Thanut, renowned on her planet for the best psychology department. With her application, she submitted a paper she had penned in secondary school while working part time at the replimat. She had taken many notes on the traders and their crews and made many observations. Although her paper was crude, her teacher had seen great promise in it. It was due to that paper that she was accepted into the University.

She was at university for six years, getting her full Doctorate in Psychology. At university, she kept a somewhat active social life. Though no one from off-world went to the university, she still learned a great deal. After graduation, she decided to attend university on the near by planet of Betazed.

But first, she decided to live off-world for a year to acclimate herself to living on a world with a sun.

At first, it proved difficult. She spent most of the time wearing dark shades, even indoors, but before long she could take them, and then eventually she could walk around outside in mild sunlight. Her reflective irises and retina made it appear as if her eyes glowed and her stark white skin glowed in even soft light. The effect gave her any otherworldly look when she was out and about on Betazed, but the people were nice and she adjusted to life there.

After a year planet-side, she enrolled and began taking more classes on the psychological philosophies of others planets. She enjoyed learning, but for two years she longed to practice the skills she had been honing for ages. And so it was that after eight long years of schooling, six on her home world and an additional two on Betazed, she was offered a job at the Crisis Center of Lake Cataria.

2371-2377 : Practicing Counselor at the Crisis Center of Lake Cataria

B'Nila started working at the Crisis Center in peace times and found that most of her work involved pretty simple cases. She worked mostly the hours she chose and was able to help a great number of people through a great number of difficult situations. In truth, there were few real crises to worry about. Betazed was peaceful and the problems there could be dealt with easily.

Then came the war and with it came a new sort of job. No more was it a simple matter of talking a couple through some marital difficulties or minor depression. She was faced with cases of soldiers returning from the front lines.

And then came the day when it all fell apart. The Dominion came to Betazed, and Betazed fell before it.

Overnight, the crisis center was faced with real crisis. The Dominion allowed them to continue to function, but Jem'Hadar walked the once therapeutic halls and a Vorta stood at all hours in the main office to oversee their daily activities. If B'Nila had not been committed to her job, it might have broken her, but her office was sound proofed and she could provide at least some comfort in that one room. The outside world was in chaos, but in her office, at least for a moment, her patients felt safe.

When the sound proofing was discovered, she was taken to a labor camp and spent the rest of the war there. Working in harsh conditions made once gentle people more brutal and those were dark days for her. She never spoke of what happened there, but she saw a darkness there unlike anything she had ever seen on her home planet.

After the war, she returned to work. Helping others, she could in some small way repair herself, but things were never the same. She was restless and uneasy. Betazed was no longer her home. She worked at the center for a couple of years longer, but in the end she could not stay. Her memories of the Dominion hovered over her like a dark cloud.

She needed to get out, to walk the worlds for awhile. That meant one thing. Starfleet.

Rather than attend the academy, as most in her field did, she enlisted as a non-commissioned officer. It meant she only needed to brush up on a few things before she could get out there. It was a relatively quick program and afterward she was stationed as a junior counselor on the USS Resolve. 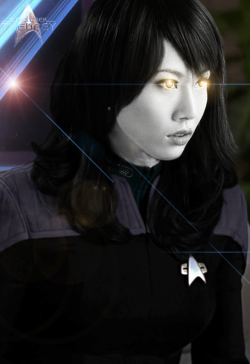 Life on the Resolve was exactly what B'Nila needed. Everything moved and changed regularly. She was constantly presented with both continuing issues and new challenges.

As the lowest ranking member of the counseling team, she was not regarded very highly and did not work the best shift or get the best office, but she did settle in quite nicely.

When the incident happened and the ship tossed far from home, the job only changed slightly for her. It became more a matter of keeping the people she served together until they could make it home. She would apply what she viewed as mental tourniquets and adhesive medical stripes to more severe damage in hopes to sustain the crew for a little longer.

She quickly developed a pragmatic approach to it all, believing that some damage would show, but that health was more than just an absence of visible quirks. She wanted to ensure the crew’s emotions were not only being expressed, but being expressed in healthy and safe ways.

She had no desire for rank or recognition and thus earned very little, only moving so far as crewman first class during the long voyage. But she also gained a great deal of insight into many things, which was a far greater reward.

When they at last made it back to Federation space and Starbase 84, she was pleased and hopeful the crew she had served would be tended to by the best mental health experts Starfleet had to offer. All of them had been through a great deal of trauma.

But things did not go as planned and, in a whirlwind, she found herself on a new ship in yet another desperate situation. So she requisitioned an office and set to work. She had a job and there were many mental tourniquets and adhesive medical strips to apply. She did what she could for the new crew as she had for her old crew, because it was her job, and she was good at her job.

B'Nila carried herself with a calm cool confidence. She rarely raised her voice. She was highly perceptive and nigh unflappable, regarding every situation with the same cool, yet gentle confidence. She had an easy, disarming way about her and a straightforward no-nonsense attitude that cut through any degree of bullshit—bureaucratic or emotional.

She always dealt with things with an even temper, doing her best to keep those she worked with at ease so she could help them work through their problems. She made it one of her primary goals to make her office a nonjudgmental place where emotions could be shared and explored.

In her own words, she had little time for relationships or sex. B'Nila is a lesbian, though not the sort to be uncomfortable around displays of male affection toward her. Instead, she usually politely and gently rebuffed such advances. She valued her working relationships more. 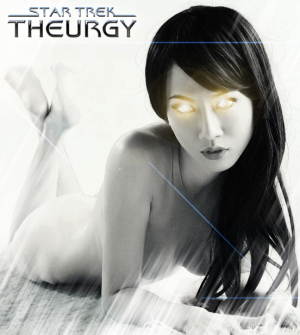 Perhaps one of the first things most would note about B'Nila was her start white skin. Being from a race which evolved on a planet without a star, she had a complete lack of any pigment of any kind. Her skin, muscle, and internal organs all had the same lack of color. Her blood was carbon based and gray. As a result, her lips and genitals were a slightly darker shade of gray due to increased blood flow. Her hair and fingernails had the highest amounts of carbon and were are black. Her hair was long and straight, hanging well past her narrow shoulders.

Her eyes that stood out against the pale white skin and black hair as they were a vivid gold and highly reflective. Though her pupils were standard, her retina were reflective so the effect gave her eyes a glow in all but the dimmest of light. The metallic sheen of her eyes was caused by heavy deposits of both pure gold and copper in her retina and irises.

At roughly 160 centimeters tall, she was slightly below average for a humanoid female, and quite thin, but sturdy enough for her duties. She had a full enough figure with small but full breasts and roundly curved hips.

She dressed in loose fitting robes and synthetic furs similar to those worn on her home planet.

Unlike many humanoids, due to the lack of a star, her species lacked a day night cycle, instead days were broken up simply by shifts of duty. Thus, she is fully capable of working any shifts with little to no difficulty. However, in order to get any good rest, she required absolute darkness.