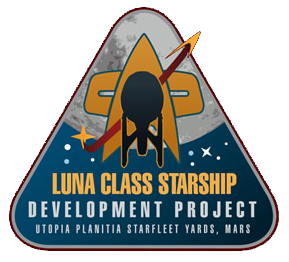 The USS Jeraddo is a relatively new Luna Class Vessel currently undergoing a 5 year exploration mission towards the galactic core. Her namesake comes from one of the energy productions moons of the Federation member planet of Bajor.

After initial space worthiness tests of the Luna-class in 2372, Starfleet Command moved forward with production of the vessels. The Dominion war had, however, left a toll on active starships and the mindset of ship designers. With a need to press more active ships into service, many ship classes were given a variety of experimental designs. At the time, many of the Luna-class ship were produced with concepts that where removed in the later models.

Launched at the beginning of 2378, the Jeraddo began it's final shakedown cruise in Axanar space, but problems were soon identified with the navigational array, and the impulse engines necessitating a return to space dock for repairs. These would be completed in early 2378 and the ship was launched with Captain Threross zh’Ptrell commanding. The ship and crew completed several relatively straightforward scientific surveys in Federation space that helped to work out any remaining kinks in the ship's systems.

Final shaking down was declared complete by her captain at the end of 2378. The ship was tasked on a 5 year exploration mission towards the galactic core, specifically to identify new potential colony sights and locations for new starbases to be built as a springboard for future expansion.

Mounted on the underside of the saucer section, the Aerowing rests in a recessed hatchway just aft of the ventral sensor array. The craft serves in the capacity of a runabout aboard larger ships. In fact the Aerowing’s technology and design is based, in large part, on the Danube class runabout.

The Aerowing provides a large secondary craft, long-range travel, and the protection, armament, and sensor capabilities beyond that of a standard auxiliary shuttle.