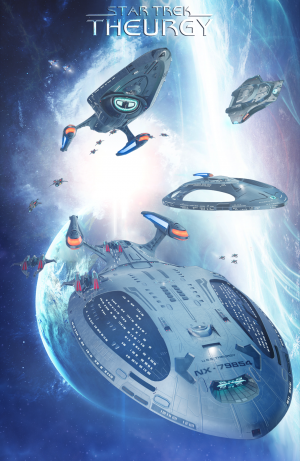 These are the positions that are available for present members in the sim, but are - however - unavailable for new Applicants. 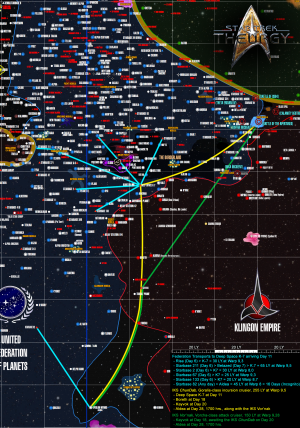 If your created character is originally assigned to the titular USS Theurgy, it is recommended that your character has been in stasis since before Episode 01, and only now could be resuscitated after getting the medical attention he/she needed. Your character would then have been injured during the flight from Earth and Starfleet and put into a stasis pod to preserve his/her life.

Please also note that regardless the position applied for during character creation, your character would not be assigned to such a position prior to arrival. This needs to be handled In-Character.

Option 1: Arrival on the IKS Vor'Nak

...and there, s/he jumped aboard the Klingon Goralis-class cruiser IKS ChunDab, which would later rendezvous with the IKS Vor'nak at the planet Kayvok. After your character stepped aboard the Vor'Nak - which is under the command of High Chancellor Martok - the Vor'nak would then arrive at Aldea and the Theurgy on April 7 (also referenced as Day 28 during the Aldea Prime Anthology, set before Season 2).

A second option would be if your character happened to be on Starbase 82 when Anderson contacts him/her on March 15, and your character travelled incognito directly to Aldea. This trip would take 17 days at Warp 8, the distance being 50 LY, and it would for example have to be aboard some inconspicuous civilian freighter. With that velocity and starting-time, your character would then arrive at Aldea on April 1st (Day 22). Of course this could be sooner if travelling at higher warp speed.

The choice of how your character arrives at Aldea is up to you, but the above are the recommended options. 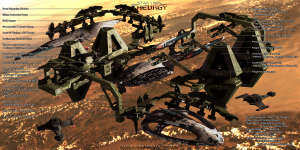 If s/he travels there on their own, your character's name and file would have been put on a list sent by Director Anderson to both the Theurgy and General Chu'vok, whom is posted at Aldea by the Klingon Defence Force. The presence of the Theurgy is both on a high security clearance level and the shipyards are also cloaked. So, upon arrival, your character would simply have to:

If your character arrives on the IKS Vor'nak, however, s/he would step off the Klingon ship right inside the cloaked shipyards, and can simply walk straight to the airlock instead of having to go via General Chu'vok - your character's name already cleared and reported ahead of arrival.

Here is the current list of Wanted Positions as of the date at the bottom of this page:

Right now, we have need of 1 (one) Tactical CONN fighter pilot to serve in the Lone Wolves Squadron. The character would need o have experience flying a AC-307 Mk II Valkyrie, but upon arrival to the Theurgy, s/he would have to undergo simulations and flight training to fly a AC-409 Mk III Valkyrie and take the place as Wolf-12 in the squad. If there would come more vacancies in the squadron, such positions will be listed here.

The Theurgy was in great need of Diplomatic Officers after the Battle of the Apertures, and Rear Admiral Joseph Nerva Anderson would try to recruit old and current Diplomatic Officers to travel to Aldea and join the mission. To know more about the Diplomatic Corps and what they do, click here!

With Rear Admiral Joseph Nerva Anderson aiding the Theurgy, he would recruit Intelligence Officers that he can completely trust, and send them to help the Theurgy on its mission. To know more about Starfleet Intelligence officers and what they do, click here!

This was the ship's helm department, which was in charge of handling all flight operations on and off the ship. With just a small number of CONN characters, this Department have more roles to fill. To know more about the CONN Department and what they do, click here!

All these NCO officers report to the Chief of the Deck and his appointed second-in-command among the deck crews.

A counselor was a position aboard Starfleet vessels and installations, usually held by a senior Starfleet officer with training in psychology. On large starships like the USS Theurgy, counseling was a separate department with a Chief Counselor, Assistant Chief Counselor, Rehabilitation Officers and Morale Officers. To know more about the Counseling Department and what they do, click here!