Before her death, A'vura Zeshryr was the Acting Chief of Operations on the USS Resolve before she evacuated to the USS Theurgy and became Asst. Chief of Operations. Before she died fighting Task Force Archeron in the Azure Nebula, A'vura Zeshryr aided in the opposition against the parasites that compromised Starfleet Command in the late 24th century.

Born an orphan, she was adopted to two Human parents on Alpha Eridani II where she spent her childhood and adolescence before moving to Earth to train at the Starfleet Academy.

Her childhood was never easy, finding Orions on a Federation colony was few and far between and when one had Human parents it was rather obvious to others that one wasn’t their child. Some treated her with sympathy and others with rather strong racism, as a child she never really noticed it and tended to avoid people whenever possible fearing that she’ll get shouted at by them. From this she developed a sense of working solo, although not against team work she has simply found it easier to work by herself or in a duo if she gets along with them; unfortunately this has developed a sense of hot headedness when trying to work with people and usually she is quick to snap at people if they continue on a path she believes is wrong.

Her parents were always supportive of her decisions and she had a rather normal childhood all things considering, bar the bullying that she had that lasted until her final years of high school. Her parents both worked as civil engineers in the local government’s office, A'vura keenly observed their work and wanted to follow suit but she didn’t enjoy the idea of sitting behind a desk all day. With growing unrest within the Romulan Star Empire, she was pleased to know that they lowered their entry requirements and she strived to achieve the highest grades so she could attend.

Towards the end of her adolescent career her parents tried to dissuade her to join Starfleet, promoting that ‘real work is made by engineers, not warriors that use exploration as an excuse to fight.’ She managed to achieve the grades she needed and without the approval of her parents she went to the Academy to achieve her goal of hopefully serving the Federation in the best way she could. The experience certainly changed her to become more independent, her parents didn’t contact her for the first two years of her Academy years and through that she had to learn to branch out to people. However for the most part she became much more secluded, spending more time in the laboratories than out at clubs with the other students; in truth she enjoyed the silence or the company of one or two co-workers – especially the Vulcans. Andorians were sassy like her, but the Vulcans appreciated quietness. 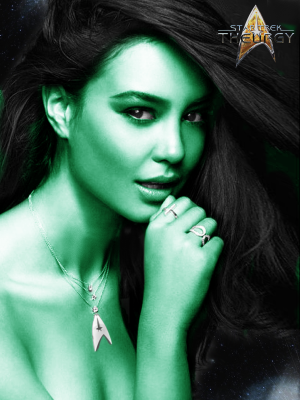 To gain enough credits to pass each semester she was obligated to earn social credits and decided to volunteer as a barmaid in the Academy Union. In truth she rather enjoyed it, but the sensitive topic of her race always came into question from random customers. She was always rather reluctant to discuss her past, for one she didn’t quite know what happened at birth nor did she want to. She had always considered herself to be Human and would find herself to be self-conscious if someone would point her out any differently; she didn’t hate who she was but hated who she wasn’t – Human. Whenever someone would ask what her homeworld was like, she would simply say that Eridani was just your standard colony world; she knew people didn’t mean to assume but she felt the need to correct people all the same as some way to try and fit in better.

Graduating from the Academy, she passed with enough honours from her different scientific and engineering courses to qualify as an officer in the Ship Operations Department. Immensely pleased, she was ecstatic to begin her service on her first starship position aboard the USS Resolve. Unfortunately fate did not quite agree to an easy and fair first mission for the new ensign, for the brief two day voyage that took them to their life changing event she had enjoyed the company of her crew and found confidence in her superior officers, knowing that they had years of experience behind them.

During the events that was simply recalled as the ‘spatial anomaly’ or ‘the gates to hell’ as some of the junior crewmen liked to call it, A'vura was forced to adapt very quickly. Within ten minutes of having her entire world thrown upside down, as she climbed up from the rubble that had most of the crew trapped, she found the operations console had overloaded and her mentor had sadly taken the blast which meant she had to now take on his role as Acting Chief of Operations. Which included the full responsibility of the ship’s internal non-security functions; a role she was meant to be shadowing for and certainly not to be thrown into. For the first she months she tried her hardest to follow to Academy and Starfleet teachings, certain rules and regulations she held higher than others while some of the crew began to disagree. Captain Kendrick was supportive, but she was still unconvinced she was the right person for the role. Over the years of constant warfare and facing death almost every week she certainly grew fond of the Resolve and over time began to dish out specifications left, right and centre if need be.

Nearing the end of their journey A'vura was forced to become much more active in ship defence, even to this day she still prefers to wear a phaser around her belt ‘just in case’, adapting a very skeptical and distrusting attitude towards casual friendliness or anyone not within the Resolve’s crew for that matter.

As the crew cheered upon their arrival at Starbase 84 she joined in, simply wishing that the past few years would have been a quiet memento and nothing she would have to ever relive again.

That, sadly, was not to be.

Initially staying on board the Resolve to oversee the repairs and refitting, she was informed about the situation around one USS Theurgy, the USS Harbinger, and a Romulan plot, she attempted to pass on the information to Captain Kendrick, in the starbase, unaware that he was already being briefed on the matter by Captain Ian Hawthorne. Getting lost in the starbase, she happened upon a suspicious repairman, who fled from her initially, prompting her to pursue, only to be ambushed by him, and was nearly raped, until a timely salvation in the form of a bomb in the man's head.

Starbase security did not take kindly to her Orion appearance, and stunned her rather than listen, and had her imprisoned, until rescued by Captain Kendrick and several Resolve crew members, where she met with the liberated Borg, Six, and the unusual Cardassian civilian scientist, Silim Parnak. She was soon thrown back into the thick of things when she learnt of the situation unfolding before them, and participated in the Battle of Starbase 84. The beleaguered Resolve was unable to withstand the withering assault by the starbase and the various vessels and fighter crafts loyal to Captain Hawthorne, unaware that Hawthorne was behind the events that led to the framing of the Resolve, her captain and crew.

Suddenly in the same boat with the Theurgy, A'vura began to question the validity of their supposed treachery, especially when the supposed traitor vessel and her captain, Jien Ives, came to the rescue of the Resolve, pooling their resources, they initiated the transfer of the crew, as the Luna-class starship began to suffer irreparable damage to her reactor. The Orion learnt of the threat to the Federation, in the form of the parasites controlling high-ranking officials. She and the surviving crew of the Resolve were absorbed into Theurgy, where she accepted the role as Assistant Chief of Operations.

Since then, she has been faced with more dangers within the Theurgy, including the unstable followers calling themselves the Devoted...

In the end, she died in the Azure Nebula, fighting Task Force Archeron's fighters aboard the Sabine. 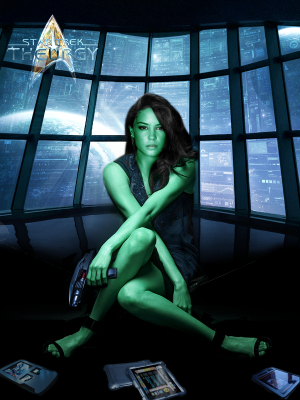 Her work ethic would show her to be a quiet efficient person; she seems confident around others but has reservations about speaking colloquially to large groups. She appears to enjoy getting to know other people, especially those that are not so close to the Federation core worlds. She avoids most questions about herself and her family, unless speaking about her homeworld (Alpha Eridani II not Orion.) She is said to be quiet and is quite clearly uncomfortable in large groups, which due to her upbringing would not appear to be that surprising. She is the type of girl you would find by the corner terminal tucked away in the side of the bridge, out of sight out of mind. Although she likes to keep active, she’s not big on fighting and would prefer to seek a diplomatic solution than go arms blazing. She loves rules, which is why she chose mathematics in the Academy. On top of that she prefers to make sure everyone else is following the same rules she was given, and would make sure that when she’s doing her usual rounds between departments that they’d be working as efficiently as possible. She’s a true problem solver at heart and loves to settle issues, scientific or otherwise.

Like most Orion women, A'vura emits a slightly higher than average pheromone count but not having been taught to properly utilise this innate skill she has never had any need nor want to expand on it. She isn’t keen on looking out for what she eats, but due to her species natural high metabolism as well as rigorous exercise she can afford to eat the many different new things she tries. She is quite attractive in an exotic sort of way, keeping light on the makeup and usually wearing clothing that emphasises her long legs or hips.