Difference between revisions of "USS Renaissance"

The USS Renaissance was a 24th century Federation Renaissance class starship operated by Starfleet. It was the prototype and the first of its class.

The Renaissance-Class was developed in the early 24th century as a replacement for the retired Constitution-class when it was found that recent Excelsior-class starships were too large for some missions. The Renaissance Development Project ambitiously incorporated all the latest experimental technology Starfleet had been developing. Though there were some problems integrating all of the new technology, the Renaissance-Class paved the way for the later Ambassador and Korelev Classes.

The prototype USS Renaissance was launched in 2303 and commissioned in 2305. Its primary missions included long-term research surveys and preliminary first contact cultural studies.

In 2370, Miko Dauntless joined the crew of the Renaissance and married Karen Dauntless and had a daughter by artificial insemination named Meridia who they raised onboard.

In 2378, Karen and Miko Dauntless were victims of a Xindi Separatist bombing on Deep Space 4. Karen Dauntless was killed but Miko escaped with the need for a pair of robotic eyes to replace the ones that were ruined in the blast.

In 2380, the Renaissance’s main engineering chamber became the site of a tragedy when eleven-year-old Meridia Dauntless was killed while taking a foolish dare. Her mother Miko fell into a depression and a number of shallow relationships that resulted in her demotion and transfer to the USS Harbinger in November of 2380, just before Harbinger joined Task Force Archeron in hunt of the Theurgy. 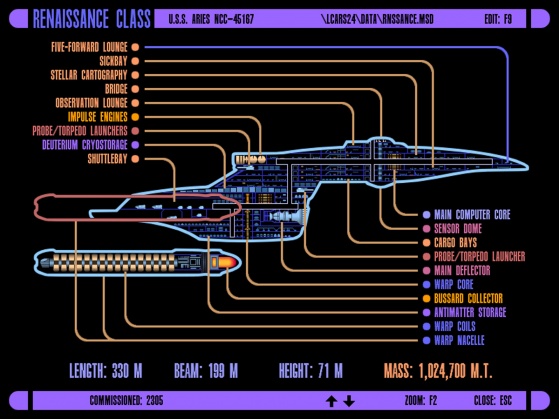