Difference between revisions of "USS Harbinger" 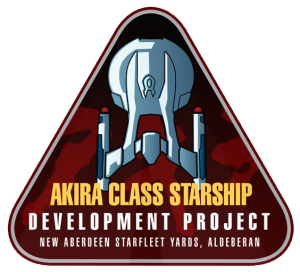 The USS Harbinger (NCC-67890) was an Akira-class Starfleet vessel that was active in the latter years of the 24th century. The vessel and its crew aided in the opposition against the parasites that compromised Starfleet Command before it was ultimately destroyed in 2381.

The Harbinger was involved with a number of military successes for the Federation, including several conflicts with Romulans and Klingons in the Neutral Zone, first encounters with hostile alien species and the destruction of dangerous technology either newly created or salvaged by warmongering races. This helped to earn a reputation as one of the most capable war vessels in the fleet.

After the Theurgy’s departure, Captain Vasser and his crew were ordered to join Task Force Archeron and Admiral Sankolov gave the order to pursue. After several days of trying to catch up with the Theurgy, an encrypted message sent from within Harbinger was intercepted and after Selena Ravenholm managed to reveal the contents, it gave Vasser cause to doubt the legitimacy of his orders. The sender was Ensign Sonja Acreth, and in the crew's attempt to apprehend her, she demonstrated supernatural strength and speed. She was, however, subdued by multiple high stun setting beams from a security detail, and she was thrown into the brig. An initial hearing confirmed the contents of the encrypted message, and Vasser deviated from his orders to accompany Task Force Archeron. He attempted to send his findings to Earth, to warn them that Admiral Sankolov might not be himself anymore. This, however, provoked immediate response from the infested Starfleet Command, resulting in Harbinger being branded traitors and hunted across the Alpha Quadrant, just like the Theurgy was.

Months later, the Harbinger finally encountered the USS Theurgy in the Hromi Cluster. While the two starships were in communication, they were attacked by a single starship from the future, the Calamity-class ship USS Calamity, sent by their common enemy. After their first engagement, the Calamity was forced to make a tactical retreat. Wounded, both the Harbinger and the Theurgy travelled to Theta Eridani IV in the Acamar System. Once they set down, both crews began damage assessments and a full week of repairs.

During the week on Theta Eridani IV, Captain Vasser transferred the majority of his crew to the Theurgy-class cruiser. The Harbinger was to function as tactical distraction, and its systems were refitted to be run by a skeleton crew. On the eight day on Theta Eridani IV, the Calamity attacked the planet with orbital strikes, and triggered a planet-wide tectonic event. By the time Harbinger and the Theurgy had made orbit, the Calamity had already left at maximum warp... as Task Force Archeron had entered the sector.

During the repairs on Theta Eridani IV, engineers on Theurgy and Harbinger had developed two cloaking devices, which were activated and used as a means of escape while a computer virus took effect throughout the task force. The 'Theurgy and the Harbinger fled separate ways towards an agreed-upon rendezvous point in a Class-9 nebulae deep into Klingon Neutral Zone space.

This was when Captain Vasser instigated his long planned hostile takeover of the Theurgy, revealing his true nature as an Augment. His First Officer T'Rena had inspired his actions, her logic dictating the course of action based on the fact that Starfleet Command had been compromised. She also made her recommendation based on the revelations coming from Sonja Acreth about the nature of the enemy and the threat they represented. Leading up to the hostile takeover, T'Rena had managed to mind-meld the majority of the crewmembers of the Harbinger to be loyal to Captain Vasser. The Theurgy crew was subdued initially, but mounted an insurrection, and managed to reclaim command of the ship just before the Calamity made its third appearance. A new battle ensued, and with the Harbinger having been hijacked by prisoners, led by ThanIda zh'Wann, it was used to destroy the last remaining vector of the Calamity. The Andorian ordered the Akira-class ship to ram the enemy, and the last people aboard beamed out before the impact.

There are few variations to Harbinger in comparison to other Akira-class models.

One of the ship's defining features was its large main shuttlebay. One of the largest such facilities on any Federation vessel, the Harbinger’s shuttlebay encompassed almost a third of the ship's saucer section, allowing the Akira-class to act as a fighter carrier as well as a cruiser. Its complement of forty Valkyrie fighters exit through the forward shuttlebay doors and returned through one of two aft bays

During repairs on Theta Eridani IV, Harbinger was fitted with the ability to cloak. This was the only known Akira-class vessel to have such a device, as to do so was in direct violation of the Treaty of Algeron.

Images of the Akira-class starship on this page were rendered by the Light Works.
Akira patch used with permission of Unusualsuspex - granted Dec 8, 2016