Difference between revisions of "Sithick"

Sithick was an Weapons Technician on the USS Theurgy in 2381. Sithick came aboard together with the rest of the personnel were commissioned on the Black Opal before its destruction, and he aided in the opposition against the parasites that compromised Starfleet Command in the end of the 24th century.

Born on Gornar in what was once called the badland sectors, Sithick was very young when he was taken off world, falling into possession of the Orion Syndicate. The slavers did a lot of trading when it came to Gorn. They bred quickly and were durable beyond measure which meant they made great soldiers. As such Sithick was traded from one war to the next as a child soldier. The badlands always had a fair share of conflicts with both Federation and Klingon alike.

But it was on an outdated Klingon bird of prey that Sithick found his true purpose. The ship always needed maintenance and when he was traded to them he jumped at the chance to do something other than killing for once. The Klingons mostly ignored him while he was young, but he learned and did all he could. Eventually he managed to make his way into the Empire itself, and win what counted as his freedom, even if it was just a low position as a mechanic, it was something he could cling too. The Klingons still treated him as little more than a slave, but for the first time in his life he didn’t have to regard himself as one.

When the Dominion War started to stir, the mechanic was still serving on the outdated ships of the Empire. Sithick was a little under 19 when his life changed forever. The ship he was serving on was badly damaged during a battle with the Dominion and was crippled beyond repair. Klingons rarely abandoned ship, but Birds of Prey had escape pods. Sithick was just close enough to one to manage to get to it. As the IKS Roc’Tar exploded he was shot into the silent void of space. His pod clipped the ship on it’s way out, and was damaged. Leaking power, he didn’t have the ability to sustain both life support and a distress beacon, so he chose the latter. Shutting down the oxygen and heat of his pod he allowed himself to be frozen and fall into a deep sleep.

When he awoke it was on the Federation ship USS El Dorado. They had won the battle and the Federation had been the one to search for survivors. The ship was damaged, unable to reach a warp over 2.4 but stable. As such it would take them months to reach a starbase where the Gorn could be transferred back to the Klingons. He offered his assistance to help the engineering team, and after much scrutiny and a few meetings with the ships counselor he was allowed to assist, granted the opportunity to undergo NCO training aboard the USS El Dorado and a replicated uniform. Normally,Gorn would not have worn clothing but he was told that if he wanted to work he would at least try to look the part.

Over the months he became familiar with both the Federation chain of command, and the systems aboard the ship. It wasn’t with it’s fair share of missed steps since he was the first of his kind to join, there was plenty of broken equipment and misunderstandings including accidentally destroying some gym equipment after attempting to use too much weight. At first he had to use a universal translator just to understand the humans, but as his NCO training continued, he learned to recognize duty-related terms, and back when he had been a slave, having to take his orders from various masters made it so that eventually he could understand them on his own, and even attempt to vocalize the language. His pronunciation without the translator were slow, and guttural. He had a hard time with hard consonants, but he proved that he was honest at every turn. While he had a limited vocabulary he had always managed to perform his duties as an engineer and has kept a universal translator close at hand just in case he needed to have a more in depth conversation.

When they arrived at the Black Opal, the ships actual destination, he did something that would stun the majority of people in his life from that day to the last. He asked if he could stay within the Federation. He saw something in Starfleet that he had never had the chance to have before.

Respect, the ideals of the Federation were non discriminatory and after the Dominion War, the Federation wanted every ally possible. He knew he would probably never receive a bridge commissioning but he was always honest, always open, and always oddly eager to serve, even if he was a slow lumbering monster by most people’s accounts. In the Federation, he could be a part of something important where in the badlands and the empire he would just die on some battlefield.

Lieutenant Commander Jennifer Dewitt and the senior staff at the Black Opal eventually decided to acquiesce the request of the Gorn technician on the basis that he had been introduced to Starfleet training on the USS El Dorado, and that they had the time and possibility to complete his training to become a crewman, the lowest NCO rank. His superior officers were Ensign T’sebl Felr and the two Cadets Vitaly Stanimir and Zhong Wu, who often avoided interacting with Sithick directly. While his work stood up to scrutiny it did take a long time for Black Opal to adjust to something as unique as a Gorn among them.

Eventually, given time, Sithick found a place for himself among the engineering staff, even becoming 'friends' with one or two of them. As he worked on helping the Black Opal build new weapons he found that he was in love with his Job. The Black Opal became the first real Home he ever had, and he began to regard the asteroid base as his territory, those among it's crew became his family even they would never regard him as such. So when the Theurgy attacked it was conflicting for Sithick. It felt wrong to attack anyone wearing a Federation uniform even if they had weapons on stun, and despite his actions as a child soldier he found himself holding back and attempting not to be noticed when they breached the engineering areas of the Black Opal. He helped a few of his fellow team members try to fend off the invaders, but mostly stayed out of the fight till they were ordered to stand down.

When the Romulans came, however, that feeling of obligation to the Federation went out of the window. Suddenly his territory was under attack by a threat he knew could strike back against. When a Romulan killed one of his friends, Sithick moved on him. Considering the location of Gornar was on the other side of Federation space, you could imagine the Romulans' surprise as he was suddenly picked up by a creature he had never seen before. Hoisted into the air by what was best described as an angry reptilian monster who would have been more at home in an old holographic horror novel than wearing a Starfleet uniform. Sithick tore him in half with his claws. It was a reminder that he would not allow people to attack his territory undefended and an action that brought Sithick back to his more barbaric years as a child soldier.

When Sithick was beamed aboard the Theurgy from the Black Opal and forced to watch his home of almost three years be destroyed the reptile wanted to cry. It had been on that base that he had made his first friends, that he had worked hard and earned his first promotion. He had been at home in that place, and he felt more vulnerable as he had to come to terms working along side yet another crew who would take time to adjust to him being among them.

Sithick was intimidating to work with. Always Quick to speak his mind, he was blunt and obtrusive. Most have considered him a square peg forcefully shoved into a round hole. His voice was low tuned, and almost guttural when he spoke. He would not tone down any part of himself just so others felt more comfortable, which had meant he had often been alone. He did not shy away from a fight for a good cause and could easily be seen as aggressive, and brutish in nature. He was somewhat territorial as it is his nature, but had never unlawfully hurt a member of a Starfleet crew. 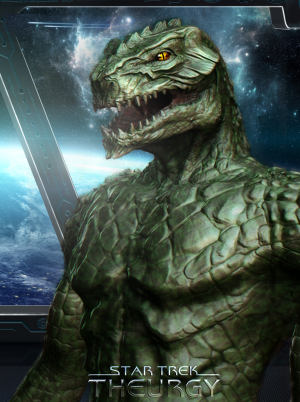 Many people would have preconceptions working Sithick, but he remained very open when it came to questions about his story, his race and his culture, at least what little he remembers of them. He had a deep respect for the chain of command, and was no stranger to taking orders. He did not view the Federation as weak like many of the others who reside in or around the empire, but rather viewed it with a deep respect considering that a Starfleet captain saved his life, and gave him a chance to be something different.

Most thought that the Gorn were a dumb, slow race, and while Sithick wasn't fast he was not dumb. The male had spent his entire life working on starships and puzzles, he was experienced in making creative solutions to keep a starship afloat due to working on old birds of prey that belonged to less on a battlefield and more in a museum. Compared to his last job Federation technology was almost easy to work with, everything was streamlined and here were tutorial PADD's describing repairs on almost everything that could go wrong instead of being held together by 23rd century duct tape and black magic sacrifices as was the joke of the Klingon Empire.

As a lover all information was unknown. Sithick never had a woman advance on him within Federation space, and Understood that any approach he made would probably be unwanted.

Sithick Was a 7'3 tall reptilian. He had claws that consisted of three long fingers and one thumb, and his feet were much the same. There was no type of shoe designed that his claws wouldn't rip through so often his steps were preceded with a ticking noise of his bare claws tapping against the metal ground. He was a slow creature because he had to treat everything with a type of care and gentleness. He had broken enough Federation technology to have learned to treat everything with great restraint.