Before his death, Ensign Minjae Soh was a Fighter Pilot on the USS Orcus, but later defected to the USS Theurgy during the Battle of Starbase 84. By then, was yet to be seen if Minjae aided in the opposition against the parasites that compromised Starfleet Command in the end of the 24th century, but he did, only to be KIA in the first battle against the Versant.

On September 14th, 2359, Minjoon and Haeyun Soh gave birth to a healthy boy, Minjae. The birth was considered by many individuals - doctors or other family and friends alike - to be quite the miracle. Years before Minjae had been born, let alone conceived, it was well known that Haeyun wasn't in the best of health conditions. One of the worst she suffered for years was PCOS, otherwise known as Polycystic Ovary Syndrome. That combined with her other conditions rendered her almost completely infertile.

Thus, when she announced to doctors and her husband that she was pregnant, many people didn't expect her to go through the entire pregnancy.

Seeing her beat all of the odds and not only give birth to Minjae, but live afterwards, made the miraculous display that much more amazing for everyone who watched her and Minjoon's son come into the world.

Minjae was born on the planet Alpha III, and raised by both his mom and dad relatively normally.

It wouldn't be until a few months after he turned eight years old that things turned upside-down with him. Haeyun's heart abruptly acted up one night, resulting in a powerful cardiac arrest. Although she was quickly rushed and treated in the local hospital, Haeyun died that same night.

Shocked and thrown into a sea of despair, both Minjoon and Minjae took the loss roughly. The elder male, however, didn't only fail to handle the loss properly. He also failed to raise his own son.

Granted, Minjae and Minjoon had never been overly close prior to Haeyun's untimely demise. The continued distant nature lingering between the two, though, made things only worse. When Minjae grew old enough and reached his adolescent years, he decided to follow the same path his mother had and joined Starfleet Academy at the age of sixteen.

No tears nor any painful good-byes were shed, only reassuring Minjae the decision to leave home had definitely been for the best. He left with a goal in mind, a sense of determination, and a custom-made set of dog tags one of his few childhood friends created. His information was on one of the metal surfaces, while the other had his mom's name, date of birth, and so on.

Originally, Minjae wanted to try to enter the medical field. He quickly found during the middle of his second year, however, that he lacked the patience to try becoming a doctor. It wouldn't be until near the end of his second year that he found his love and natural talent for flying. Having seemed to find his niche, Minjae focused primarily on acing his piloting class, as well any associated with it. He graduated in the top ten percent of his Starfleet class in 2378, and soon enrolled in the Tactical CONN Academy.

By the time he finished in the Tactical CONN Academy, Minjae was acknowledged by many of his peers as a very talented pilot. A few dared to use the term 'prodigy', but he insisted that wasn't quite the case. Lucky, a quick learner, no doubt, but even he wasn't so cocky to agree that Minjae was somehow a genius. His flying skills helped him successfully learn how to pilot the MK II Valkyrie.

Upon graduating from the Tactical CONN Academy, Minjae was first sent to work on the USS Kusanagi. The Asian name of the ship was but a nice bonus for Minjae. The thing he truly appreciated were the peers he was surrounded by. Many held a similar attitude as the ones from Starfleet and the Tactical CONN Academy. He was acknowledged and appreciated for his talents. Likewise, Minjae met quite a few new faces that he could begin to view as comrades, possibly even friends in the future.

The first individual that stood out to him was Thomas Ravon, callsign "Razor". Though he never pried for details of Thomas' personal life, Minjae couldn't help but feel a kindred spirit within him. They weren't that different; or at least that was the impression the younger pilot got while around Thomas. A few times, Minjae was assigned to officially work with Thomas. More often than not, however, he watched and observed the older pilot from afar, mentally taking notes on how to better himself as an aerialist.

The second was a woman whom, though Minjae only briefly met and knew, also grabbed Minjae's attention; Alessia Garcia, callsign "Angel". She had a very similar effect on him, just like Thomas had. Yet, she came off as more ... how to word it? Stern could be a word, but it wasn't the only thing Minjae sensed from her. If he had to use a single phrase, it'd be something along the lines of 'out of my league'.

Despite Angel not being the only female, she was by far one of the best and most competent ones.

In hindsight, it was more likely that hormones made Minjae secretly become infatuated. Of course, it could also have been the concept of an Angel and Shinigami pairing up.

Either way, he made no moves; partly due to feeling inferior and simply out of respect and protocol. Much like the two comrades he looked up to, Minjae didn't stay on the USS Kusanagi for very long. In May of 2380, Minjae was hand-picked for the Valravn Program. The project was performed on the Luna base. Alessia Garcia was also hand-picked for the program, to Minjae's delight.

After almost a year of test-flying the at the Luna base to aid out with the Valravn Program, Minjae was directly transferred to the USS Orcus to work under Commander Marcus Alexander Slayton.

Suffice to say, Minjae and Marcus Slayton quickly butted heads with one another. Marcus disliked Minjae's arrogant attitude, even when he proved he could back it up. Minjae, on the other hand, always felt the man was just ... wrong. Yet, he could never prove that. So, he kept his thoughts to himself, complying with every task and order given over to him.

Alas, as quickly as he arrived onto the USS Orcus, Minjae soon discovered his instincts had indeed been right all along. He overheard a private conversation between Marcus and a small handful of other higher-ups. All he'd needed to hear were the words 'pilots' and 'pawns' for him to make up his mind.

Minjae refused to work for a man who viewed him as little more than some sacrificial lamb. The absolute last straw for him arrived when he overheard a very horrifying conversation during the Battle of Starbase 84; one that revealed Starfleet Command had been compromised. If the talk hadn't been disgusting enough, the fact Minjae overheard it during the midst of a battle was definitely the last bits of encouragement he needed.

Prior to that talk echoing in his ears, Minjae could have attempted to remain loyal and stay under Marcus Slayton's command.

The moment he heard about the set up, his decision was officially made. Moreover, Thomas Ravon were among the pilots they were supposed to fight, and Minjae couldn't do it. He would rather learn the Theurgy's mission, and what made a pilot such as Razor defect.

He - and several other members - turned and abandoned their posts. To some, Minjae would be deemed a traitor. So be it; he'd rather be viewed as a traitor than a man who served a manipulative, selfish bastard. Minjae followed everyone who decided to change their alliances and eventually found himself landing in the Lower Shuttle Bay of the USS Theurgy, simultaneously officially becoming a member of the same vessel.

The first thing people tended to notice about Minjae was his cocky attitude. More often than not, he found ways to back it up. Still, it didn't stop other comrades and superiors all around him from getting rather quickly irritated with the young fighter pilot.

However, those that took the time to look past his flaw could find a completely different side of Minjae; a very determined, loyal, strong one.

While Minjae tended to show these traits easiest in the cockpit of any ship, they can also emerge when the right buttons were pushed, such as trying to insult his skills or honor. Despite being a human, his view on honor was as strong as Klingon's, as was his will power. 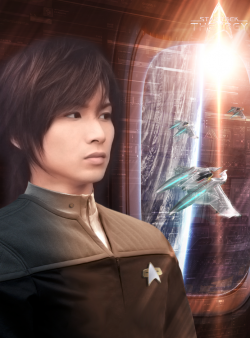 The first thing people tended to notice about Minjae was his cocky attitude. More often than not, he found ways Minjae actually managed to break many stereotypes of people who had any Asian culture. Whereas most didn't get past five and a half feet tall in height, Minjae stood at a full height of five feet, eight inches. He had a lanky, athletic body. However, this wasn't to say he didn't possess any muscles. They just weren't plentiful compared to most other men around Minjae.

But what Minjae lacked in physical prowess, he more than made up for in traits such as intellect and agility.

Minjae had dark brown hair with hints of black near the bottom areas. It was always kept short, never going past his shoulders. He also had hazel eyes that tended to pierce through people, especially whsaen he was furious with other individuals. This was what earned him the callsign of Shinigami, as people often described the sensation as a similar one to staring at an entity akin to Death and fearing for their lives.

Whenever Minjae wasn't required to wear his uniform or dress code attire, he could typically be seen in a very casual set of clothing, often favoring jeans and a tank top. In or out of uniform, he always wore a custom set of dog tags around his neck. One of the tags had his name and information engraved on it, while the other had his mother's.