Difference between revisions of "Inej Avirim" 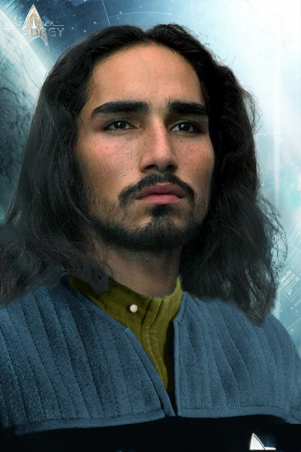 Inej Avirim (pronunciation) was a Security officer and ex-operative for Starfleet Intelligence. After being demoted and resigning from Intelligence, he used his new posting as a security officer at Starfleet Headquarters to feed intel on Starfleet Command to Rear Admiral Andersson, Head of Covert Operations. In March 2381, he was discovered and Andersson directed him to flee to Aldea and join the crew of the the Theurgy.

Nosey buggers aintcha? Shit in the reports not enough, y’all gotta hear it from the horse’s? Fine, have at it. Huff my laundry, kinky bastards.

Born in Tirei City, real met-ro-politan, all skyscrapers an’ nightclubs. Call it a city, yeah, ‘cept it’s really just one big fuckin’ resort, whole city designed t’be fun for them visitors, all smoke an’ mirrors so they don’t gotta see behind the curtain.

‘M I bein’ too obvious? Fuckin’ hated the place.

Me family lives in the resort, in this fuckoff massive hotel. Me folks got jobs doin’ them invisible, thankless jobs. Want better for us kids. Brother an’ sister work hard, manage t’snag jobs front of house -- sister’s a dancer, brother’s a receptionist, an’ shucks if we ain’t all so proud. I’m… Well. Y’all know me. Fuckin’ asshole even then.

Me hearin’s dogshit when I’m a littlie, get this op’ration t’sort it. Works for a couple’a years, then starts goin’ downhill again, for good this time. I’m, what, thirteen? Takes me a bit t’notice, an’ by then it’s too late ain’t it. Fuckin’-- thought I was done with that shit, but nah, bad penny. Get me fixed up with aids, an’ they help some, but fuck me if they ain’t just the worst.

That shit ain’t no excuse, don’t get me wrong. Was a fuckin’ dickhead even when me ears worked. Still. Really went t’town after that. All fists an' kickin', that’s me, an’ fuckin’ with rich tourists. Eventually management gets fed up, an’ next thing I know me family’s bein’ fuckin’ threatened. Either I go, or they do.

They spent a long fuckin’ time gettin’ the jobs they got here. Lose that an’ they all gotta move, an’ here’s to hopin’ they get picked up somewhere else -- ain’t nowhere t’live in Tirei if you ain’t got a job. Nah. Out on me ear, ain’t I? No pun intended.

Mostly just get worse, t’be honest. Was a real shithead for a few years there, like what you’re seein’ now is best-behaviour-Ej, this ain’t nothin’. So yeah. Some bad folks, some bad stuff. Get, uh, maybe more involved than I should. Manage t’get meself noticed by some motherfucker, this Ybsin, real skeevy bloke, not the kinda man you wanna be on their radar.

Important thing is where you folks come in, I guess. New fella starts showin’ up round Ybsin’s place, this Ricci bloke, an’ I figure somethin’s up pretty sharpish. Man ain’t a fuckin’ arsehole, for one. Actually tries speakin’ t’me-- that’s right, sorry, forgot t’say. He -- uh, Ybsin -- he busted up me aids after I tried t’leg it this one time. So there’s me tryna make sense of the mess, tryna figure out the fuck folks are askin’ me to do, an’ it’s fuckin’ hilarious the mistakes I’m makin’, the guys love it, great fun all round. Lipreadin’ ain’t all that, lemme tell ya.

This bloke though, he starts signin’ at me. Takes us a bit, back an’ forth, but we get there, enough t’get ourselves understood. An’ mate, y’all got no idea. Havin’ a conversation, where you fuckin’ know what’s bein’ said an’ can contribute? Madness.

Fella’s a Fed, figured that much out by now. Ybsin an’ his lot are usin’ the resort t’smuggle all sorts’a shit into Risa, an’ the Hedony ain’t too hot on it. Them useless fucks couldn’t enforce their way outta their own arses though, so gotta call in the big boys, do their dirty work for ‘em.

So I spill me guts to this Fed, ‘cause I’m figurin’, either his lot’ll come down on this place an’ I can finally be rid of fuckin’ Ybsin and his shitty-- yeah. Or, other option, Ybsin an’ co will figure me out an’ just kick me t’death or some shit. It’s like 50-50, an’ either way it’ll be done an’ dusted, no skin off mine.

Turns out Feds kinda know what they’re doin’, an’ next thing the whole fuckin’ place is down an’ out. Not public-like, Hedony’d never have that, can’t ruin their perfect fuckin’ PR. Still. Manage t’convince the Feds t’take me with ‘em once they’re done, ‘cause fuck knows I ain’t stayin’. After all that? Nah mate.

Figure I’ll sign up t’help ‘em out after that, ‘s only fair right? You scratch mine an’ all that. Take a coupla years with ‘em, doin’ a bunch’a shit I can’t put on my fuckin’ resumé or nothin’. Anyway. That shit wears on you, after a time. Leastways, did on me. Maybe just weren’t cut out for it. End up-- Well. Still classified, can’t go runnin’ me mouth. Shit went sideways, words got thrown around, pretty much all you need t’know. Don’t regret it none, but you gotta know, weren’t somethin’ I did lightly neither. Know I look like a fuckin’ loose canon, an’ yeah, ain’t even wrong, but I ain’t a fuckin’-- I’m not off me tits. Not totally.

Anyway. After all that, figure it’s time for a change, yeah? So here I am, bibbidy-bobbidy, reportin’ for duty. If y’all will have me, that is.

Inej was an informant for Starfleet Intelligence during Operation Mayfly, a joint effort by the Risian Hedony and Starfleet Intelligence’s Covert Operations department to bring down a weapons smuggling ring working out of Tirei City, Risa. During this operation he formed a relationship with Lieutenant Luca Ricci, and after the operation’s completion Ricci mentored Inej through the Starfleet Academy application process. Inej was recruited by Intelligence halfway through his study and spent several years in Covert Ops as a field agent. He played a role in Operations Blackthorn and Grindstone during this time, as well as working on several smaller assignments.

In 2178, Inej was involved in a quickly-escalating disagreement with Lt Cmdr Luca Ricci who had been his direct superior during Operation Grindstone. As a result of the altercation, Ricci demoted Inej back to Ensign from Lieutenant, leading him to abruptly resign from Intelligence.

He returned to the Academy to retrain as a Security Officer, and upon graduation he was stationed to Starfleet Headquarters in Paris. Shortly after beginning this assignment he was contacted by Rear Admiral Andersson, Head of Covert Operations. Anderson persuaded Inej to use this position to feed him information as part of his ongoing and unsanctioned investigation into Starfleet Command. In March 2381, Inej was accompanying a member of Starfleet Command on a diplomatic visit to Qo’noS, acting as a bodyguard, when his illegal activities were discovered. Andersson directed him to flee to Aldea and join the crew of the the Theurgy.

True to the stereotypes of his people, Inej was a thrill-seeking hedonist. He was generally agreeable and lighthearted, if a little rough and ready, and he made a good drinking or sparring partner. He relied on humour and flirtation in his interactions, the latter with varying levels of sincerity. Although usually laid-back, his moods could change swiftly and if pushed he could become defensive and combative; however this would only last a brief moment, and rarely escalated to violence.

Despite his background in Intelligence, Inej was surprisingly honest and open. He was a cheerful misanthropist, a jaded realist who believed the worst of people but without holding it against them. He avoided getting involved in other people’s business, and went out of his way to affect indifference when it came to their opinions of him. In general, he was uncomfortable with emotional sincerity of any kind, whether his own or that of another; however in rare moments he could be unexpectedly astute and respectful.

Inej was active and energetic both on and off duty, and enjoyed sparring, drinking, and playing poker. He also had a healthy, if uneducated, appreciation for nature. He was allergic to dogs but refused to let that hinder him, and had his lifestyle allowed he would’ve adopted at least one St Bernard by now. 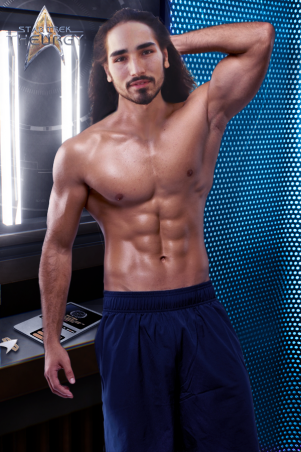 Symptoms: Patient reports hearing loss of up to 50% in both ears. He is unable to hear sounds below approximately 60 decibels, or a normal conversational level. He is also unable to differentiate between sounds, meaning that although he can often hear speech he is not able to identify it as such and cannot make out individual words by ear.

Post-Treatment Evaluation: Patient reports a greater range of hearing than previously achieved. While wearing his hearing aids, the patient is now able to hear down to approximately 30 dBs, equivalent to a loud whisper. He still experiences difficulty filtering sounds out from one another and has poor directional hearing; however he is able to comfortably follow speech with a high degree of accuracy and reports a high level of aural clarity.

Inej appeared human, of averge male height with a wiry frame, and was physically fit out of necessity rather than vanity. He had quick reflexes and was dextrous rather than particularly strong, although he could hold his own in a fist fight.

His general appearance was rather scruffy. His long hair was usually loose and fairly unkempt, and he rarely made an effort to tidy himself up. The most attention he paid to his appearance was in the jewellery he wore both on- and off-duty, consisting of necklaces and many rings. Out of uniform, Inej wore loose-fitting clothes designed for the warm weather of his home, often including low-cut vests and flowing skirts. In uniform, he wore the trouser and skant variations interchangably.

His hearing aids were detachable, fitting into the inner ear and connecting to implants. The devices caused him some discomfort to use and he preferred to wear only one at a time, and left them out when he could while off-duty. When wearing an aid, he would tuck his hair up behind that ear; if he wore both at once, he would tie his hair back to get it out the way.

Inej was raised bilingual in Risian and Federation Standard, and he was fluent in both languages by the time he lost the majority of his hearing. His family encouraged him to practise speaking and as a result he sounded very natural, using inflection and speaking with only a slight accent, which in itself was masked by the ‘city accent’ he refused to eradicate. He was more comfortable in Federation Standard and avoided speaking orally if he was not wearing his aids.

After leaving Risa, Inej also learnt Federation Standard Sign Language, which he was proficient in. There were devices available for sign-to-speech translation for the hearing, however Inej didn’t sign enough to consider them particularly useful and rarely bothered with them. He could also lipread both Risian and Federation Standard, and would use lipreading to supplement his hearing. It was possible for him to follow speech through lipreading alone, although with a low level of accuraccy; it was also extremely tiring and so he tried to do it as little as possible.

The last letter in ‘Inej’ was a Risian-specific character called ‘ej’ and pronounced like the S in the English ‘treasure’, or the J in the French ‘je’.