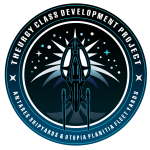 Star Trek: Theurgy is kind of a progressive novel, composed of large long-lasting story arcs that can go on through several Episodes, as well as the more common plots produced by character interaction. All of this is written cohesively by the writers, edited and corrected by the group and the Game Moderator (GM) to ensure a consolidated storyline. (See this page for more info about the GM's role)

Star Trek: Theurgy has Episodes that can take up anything from six months to over a year depending on the writers, the amount of writers, and their drive to develop and write that particular Episode. These greater brush-strokes of the Episodes are planned out to begin with, but tend to work out else than originally intended. This means that there is no obligatory script followed unless the writers wish to follow one through certain points in the storyline.

For this space opera to be well played, we have some rules.