Utilizing the breakthrough notes of the brilliant engineer Lawrence "Larry" Marvick, the Environment Manipulation Unit (E.M.U.) was designed by Starfleet Corps of Engineers in an effort to integrate Medusans into Starfleet. The first step was the installation of a radiation shield in front of the upgraded Constitution-class transporters, thereby removing the need for Starfleet cress needing a protective visor when transporting Medusans. 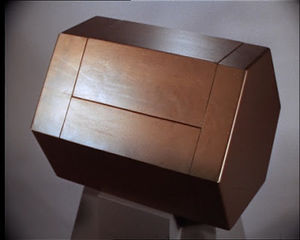 The first containment unit made available to Medusans aboard Federation vessels was the original opaque carrier pod designed by Marvick before his tragic death. Its immediate flaws consisted of its lack of self-propulsion, requiring handlers to use an antigrav to move the Medusan about the ship. The pod lacked communicator technology allowing the Medusan within the ability to communicate without forming a telepathic mind link with a psionic translator. The lid was not securable and was prone to opening. 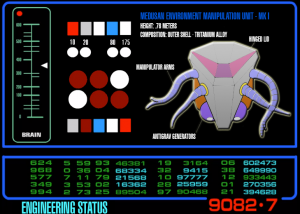 The E.M.U. Mk I resembled the original habitat shell but was upright and streamlined. It came equipped with inbuilt antigravs and a set of robotic manipulator arms in recesses along its sides. The lid of the E.M.U. had a domelike shape that vaguely implied a head and was more secure against accidental opening. 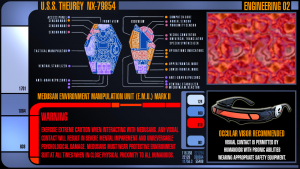