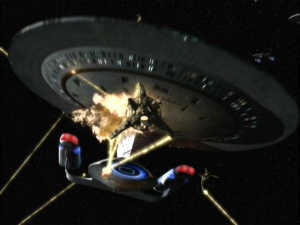 Designed to be the best exploration and science vessel ever deployed by Starfleet, the Galaxy class was put into service with many of the most advanced technologies available in the late 2350s along with its sister design, the Nebula-class. It also represented a new philosophy in Starfleet where officers and crew on deep space and long duration assignments could bring along their families and loved ones rather than be apart from them for years. This philosophy meant the starship was one of the largest produced with often over 2000 crew and their family members aboard at any given time, and an emergency evacuation limit of around 15,000, but more typical crew levels numbered near 1000. While non-Starfleet personnel amounted to only between 15-20% of the total crew, each Galaxy-class starship had facilities and services onboard to serve Starfleet crew and civilians typically only seen on starbases including schools for children, bars and in some cases restaurants, day-care, and the largest holodecks produced at that time.

With much of the interior space of a Galaxy class empty and waiting for mission specific modules to be installed, each vessel quickly became unique compared to others of its class. Often the occupations of the vessel’s civilians would dictate what kind of research facilities would be installed. As an example, the civilian husband of a serving science officer might have been be a metallurgist and request a facility able to handle the specialized needs of his smelting and fabrication research. This adaptability and capability for expansion also meant that these large vessels often ended up with a specialist for any situation, and civilian specialists that Starfleet required the expertise of would receive temporary rank and further space consideration for their facilities and hobbies onboard. Each Galaxy-class vessel had the largest warp core then produced by the Federation and designed by the Advanced Starship Design Bureau. This powerplant provided the massive starship with the capability to maintain a cruising speed of warp 6 and an emergency velocity of warp 9.8. Three identical isolinear computer cores with FTL processing capabilities tied the wide variety of scientific sensors, laboratories, and research facilities onboard together. These cores could each take over all computer needs on the ship in the case of the destruction of the other two. This meant that in the case of the destruction of the vessel, the data stored by a Galaxy-class starship could be pieced back together based on pieces recovered from each core.

Unlike most Starfleet vessels before it, the Galaxy-class was designed with the ability to separate and reattach its saucer without the need for a return to dry dock, allowing this use for both for emergency purposes and in tactical engagements such as when USS Enterprise (NCC 1701-D) used the technique against the Borg following the Battle of Wolf 359 in 2367. Auxiliary shuttle craft were located in three separate shuttlebays, and typically included ten Type 6 or 7 personnel shuttles, ten type-9A cargo shuttles, and twelve type-15, 15A, or 16 shuttlepods.

The following 13 pages are in this category, out of 13 total.